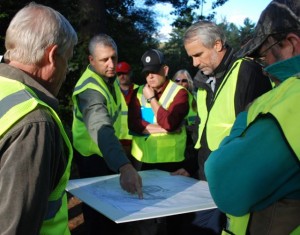 Imagine nine and a half Olympic-sized swimming pools filled with the juice that dribbles off the garbage truck. That’s how much garbage-infused water is pumped out of a single 20-acre cell every year in Moretown Landfill.

Moretown residents are concerned that garbage-infused water, called leachate, could leak into the groundwater and make its way to their drinking water wells. Neighbors of the landfill aired their concerns at a public hearing held by the Moretown Development Review Board Thursday evening. At the meeting, landfill engineers explained how landfills are redundantly designed to prevent any leakage. A hydrogeologist discussed how the groundwater that flows around the Moretown Landfill is not likely to make its way into drinking water wells.

The groundwater underneath the landfill is currently undergoing reclassification from potable to non-potable due to the elevated levels of arsenic, iron and manganese present. Meanwhile, the Moretown Landfill has applied to the state and town for permits to expand into a fourth cell, which would double its current size. If it does not expand, the landfill will be full in two years.

Tom Badowski, the general manager of the Moretown Landfill, said at the meeting that “Our main function as a company is to protect groundwater.”

The Moretown Landfill is located on Route 2 in Moretown, on the slopes of Mount Cobb, just 200 feet from the Winooski River. The current landfill contains four cells. The oldest cell is unlined and adjacent to wetlands just 200 feet from the Winooski River. That cell was capped with soil in 1993 and high-density polyethylene (HDPE), essentially a durable and strong plastic, in 2006. Subsequent cells are double-lined; cell one, which is now closed, has also been capped with HDPE. Cells two and three are in active use.

Below the trash in the lined cells is a granular soil designed to allow water to settle out. Below that is a material that conducts the leachate toward a drainage point. That material is underlain by HDPE. Together, these three layers are the primary liner. Under the primary liner is a nearly identical secondary liner, which collects any leachate that gets through the primary liner. These layers are welded together at the edges to prevent water from seeping in. Below the primary and secondary liners is between 2 feet and 10 feet of clay or low-permeability soil, depending on the cell. And below that is a foot of sand ringed by perforated pipes, designed to drain any leachate or groundwater from under the cell. Each of these layers is monitored regularly for volume of leachate.

John Haney, a professional engineer with Sanborn, Head, and Associates, an engineering firm contracted by the landfill, said that this has “been shown to be the best available technology for liner systems.”

The Moretown Landfill pumps 6 million gallons of leachate each year out of the bottom of cell two, the equivalent to nine and a half Olympic-sized pools. The primary liner system leaks, because they also drain leachate from between the primary and secondary liners on that cell. The leachate is trucked to wastewater treatment plants for disposal.

When asked how much leachate is drained from between the primary and secondary liners on cell two, Badowski said 5 gallons a day for the entire 20-acre cell. After members of the audience asked clarifying questions, however, Badowski corrected his statement to say that they drain 5 gallons per acre per day. That’s 100 gallons from the entire cell every day, 20 times more than he originally stated. The amount is 20 times less than the state’s limit.

If the leachate from between the primary and secondary liners exceeds the state’s limit, the landfill would be required to exhume the trash, locate the leaks, and repair them — or else cap the cell.

Rob Sochovka, a representative of Moretown Landfill Inc., said that a three-inch hole through the entire liner system would, in his opinion, not contaminate the soil or the groundwater.
Groundwater downslope of the unlined cell is contaminated with arsenic, iron and manganese. In the past, it also contained volatile organic compounds, which are toxic. Since the unlined cell was capped, contaminants have declined. Volatile organic compounds are now almost undetectable downslope of the unlined landfill.

Arsenic, iron, and manganese are also elevated upslope of the landfill, which indicates that they are naturally occurring in the bedrock.

According to Tim White, a hydrogeologist with Sanborn, Head, and Associates, the groundwater underneath the proposed cell flows north, downhill to the Winooski River. During the hearing, residents pointed out that on White’s map, it appears that groundwater actually flows north-northwest, not due north. White was adamant that, based on geology, it is highly unlikely that the groundwater would flow from the landfill westward to residents’ homes.

White did say that the blasting the landfill conducts seasonally to create material with which to cover the trash could contaminate the groundwater just below the cell. The base of cell four will be below the water table.

Since the landfill blasted this summer, some residents have complained of new reddish tints and sulfur smells in their well water. Raoul Cervantes, who lives less than a mile away, said his well water has elevated levels of total coliform, something that wasn’t present prior to the blasting this summer.

Officials from Maine Drilling & Blasting, the company contracted to do the blasting, as well as officials from Sanborn, Head, and Associates, said that blasting concentrates explosive energy around the blast site on purpose, so that it is highly unlikely vibrations travel deep into the ground.

According to a 2010 report by New Hampshire Department of Environmental Services, blasting can contaminate groundwater, and it does so in two ways: by releasing contaminants from the explosives themselves, or by shaking material loose from the bedrock so that it enters fractures through which groundwater travels.

Resident Max Fortune, who lives within a mile of the landfill, said after the meeting, “We’re very frustrated with the lack of concern [landfill managers have] for the health of the neighbors.”

The next public hearing will address air pollution, dust, and odors associated with landfill activities. It will be on Nov. 13 at 6:30 pm, location to be determined.

Thanks for reporting an error with the story, "Moretown residents worry about leachate from landfill"