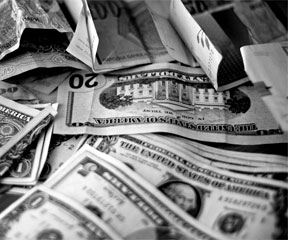 An examination of specially compiled data from two national research groups shows that Vermont’s top political donors for 2011-2012 are overwhelmingly Democratic, with only two Republican donors appearing in the top 10 donors giving to national politics, including Vermont’s congressional delegation.

Retired Rochester resident Jeffrey Steinkamp has donated about $55,000 this election cycle, mostly to Mitt Romney and the Republican National Committee, along with small amounts to Michele Bachmann and John Boehner. Steinkamp, who formerly worked in real estate and lived in New York state, declined an interview request.

Lenore Broughton, featured in the news recently as the sole funder of Republican super PAC Vermonters First, came in at No. 6, donating about $68,250 to national Republicans. Broughton sponsors True North Reports, a conservative online publication.

According to filings with Vermont’s Secretary of State, Broughton is associated with advocacy nonprofits, including Vermonters for a Better Education, Defenders Council of Vermont, and We Stand with Israel. Broughton did not return repeated requests for comment.

The most generous donor to national Democrats is the Stetson family of Norwich. Jane Watson Stetson, Bill Stetson, and daughter Grace Stetson, donated about $220,000 this election cycle. Both Bill and Jane are influential political fundraisers, and Bill, an environmental consultant, has an extensive background in Vermont and national campaigns, while Jane is national finance chair for the Democratic National Committee.

Asked why he donated to political causes, Bill Stetson described political donations “a kind of activism.”

“You can help a candidate you really believe in,” he said. “We do and we max out, as it were.” He added: “We don’t just give monetarily. We always volunteer.” He readily acknowledged, however, that “national politics is an expensive game.”

Their daughter Grace Stetson, a college freshman in Washington D.C., gave $30,800 to the DNC in March 2012, from her personal inheritance fund.

Other high-ranking donors include Donna Gaston and Jake Burton Carpenter, who own and operate Burton Snowboards; venture capitalist Charlie Kireker and his wife, Marie Yager; and prominent Burlington developer Lisa Steele and her husband, Scott Hammond.

Steele is a member of the Bancroft family and a former board member of Dow Jones, who voted to sell the company for $5 billion to Rupert Murdoch’s News Corp. in 2007. All three couples declined interview requests for this article.

Retired Middlebury College political scientist Eric Davis said the list underscored a historical trend, with a handful of affluent Democrats in Vermont supporting center-left candidates, like Barack Obama, Patrick Leahy or Howard Dean in 2004, significantly. The number of well-heeled Republican donors, by contrast, seems to be dwindling, he said.

Davis cautioned: “These people are not in the category of George Soros and Sheldon Adelson, who are giving seven- and eight-figure donations to super PACs. These people give to Pat Leahy, or Barack Obama. When Michelle or Barack come to Vermont, to have private dinners for people who give $37,000 or more, these are the people who were there.”

Davis described Leahy as the likely “conduit to national politics” for these donors, adding, “I think Shumlin would certainly be interested in the views of these people on a wide range of issues -- they’re among the heavier hitters in Vermont politics.”

“People give for a variety of different reasons but it usually is about ego, power or a sincere desire to change the world,” Ellis said. “And usually it’s a combination of all of them.”

Donations – especially those driving state politics in a small state like Vermont – can grant access to political decision-making circles.

Winthrop Smith, a former chair of Merrill Lynch International who now owns Sugarbush Resort, a Warren ski resort, says even in a small state where politicians tend to be readily accessible, contributors “have a little bit more of an opportunity for face time.”

“Very often, it’s just an opportunity to have a dialog, to have time for a meeting,” said Smith. “If you donate, or organize an event, people are certainly going to be polite and give you an audience, and very often give you a chance to express your opinion.”

Ellis drew distinctions among some major donors. Those involved in the renewable energy and real estate industries may have more to gain from their contributions, he said.

A case in point, Ellis said, is David Blittersdorf, who started two state renewable energy companies, NRG Systems and more recently AllEarth Renewables. “He is using his money as an asset, as a tool to drive policy and to make the world a better place,” Ellis said. “If he made umbrellas for a living, he would still give.”

Ellis also mentioned Ernest Pomerleau, a major Burlington real estate developer who also has stakes in renewable energy, as a donor who may give for more strategic reasons.

In an interview, Pomerleau said he remained active in politics -- lobbying, testifying and donating in both Montpelier and Washington -- in an effort to defend both his ideological and business interests. In his own words: “If you’re not at the table, then you’re on the menu. … Political donations give you a chance to be at the table, and you’ve got to be at the table.”

Legislative issues Pomerleau pays attention to include state tax law and the state’s permitting process for developers. “I’m not going to sit on the sidelines,” Pomerleau said. “Being politically active is a prudent measure for people like myself, that are so impacted daily by pieces of legislation, either local or federal.”

“Some people may call me the 1 percent, but if the 1 percent means those most dedicated to this community for their lifetime, those who created the most jobs, then I’m guilty as charged,” said Pomerleau, adding that he didn’t hesitate to hire lobbyists to defend his beliefs where necessary.

To see a list of the top 10 donors to Vermont state and federal politics, click here, and look at donors 11-20.

VTDigger compiled a list of top donors from around the country donating to Vermont state and federal politicians, using data from the research groups behind followthemoney.org and opensecrets.org. Although the list contains some overlapping individuals with those donating to federal politics, there were also a few from out of state.

Four out-of-state donors tied at 10th on the list, donating $10,000 to Vermont state and federal politicians and state committees this past election cycle. Two were from New York state, with two from Washington, D.C.

One of those donors is former journalist, Gloria Jarecki, who has family in Waitsfield and is a longtime friend of Leahy. She runs the social justice foundation Bright Water Fund. She said of Leahy and Sen. Bernie Sanders, “We see eye-to-eye on everything.”

One Washington, D.C., donor, Wayne Reynolds, runs the leadership mentoring nonprofit the Academy of Achievement, and donated $10,000 in June 2012 to the Vermont state Republican party.

Ironically, however, his donation is intended for the Romney campaign, which struck a deal with the Vermont GOP for the state party to manage Romney campaign cash in return for a monthly $20,000 stipend.

“That money was intended for Mitt Romney’s campaign,” explained Reynolds. “Why they would pick Vermont, I have no idea, everybody there’s a Democrat.

“It’s nothing for or against Vermont,” he continued. “I’ve never been there.”

Who are the biggest donors to campaigns and political causes?

For the first time, independent nonprofit newsrooms across the country joined with data experts to identify the companies and individuals who have spent the most bankrolling the races in selected states.

This is an ongoing project of the Investigative News Network with data analysis and reporting by: Followthemoney.org, I-News Network in Colorado, the Iowa Center for Public Affairs Journalism, the New England Center for Investigative Reporting in Boston, Opensecrets.org, Investigative Newsource in San Diego, the St. Louis Beacon and VTDigger. The data include donations to federal and state issues and candidates from 2008 to the most current available for 2012.

For this story, the Center for Responsive Politics analyzed donations to candidates, parties, PACs, super PACs, and 527 organizations in each of the selected states based on data released electronically by the Federal Election Commission and the Internal Revenue Service. The National Institute on Money in State Politics analyzed donations to candidates, parties and ballot measure committees in the same states based on data reported to state disclosure agencies. The organizations merged their data to come up with the major campaign finance players in California, Colorado, Iowa, Massachusetts, Missouri, Pennsylvania and Vermont.

Reporters supplemented the data with other contributions, such as those to state PACs, in some instances.

Correction: We originally reported that Broughton continues to fund True North Radio. The program went off the air two years ago. The 11 to noon spot at WDEV is now held by Common Sense Radio, sponsored by the Ethan Allen Institute.

Thanks for reporting an error with the story, "Vermont top political fundraisers: Who are they and what do they want..."