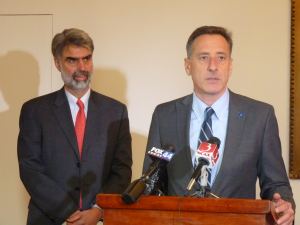 In his first act as governor, Peter Shumlin met with the Vermont State Employees Association to discuss labor savings for fiscal year 2012.

Shumlin saw union officials just hours after he was sworn in last Thursday, and the next morning he announced his plan to change health insurance benefits and offer voluntary “flex” time, or furloughs, for state workers.

In addition, Shumlin said he would institute a hiring freeze and squeeze $2 million in savings from the state’s contracts with private companies. (The number of “personal service contracts” has grown from 727 at a cost of $110 million, to 1,570 at a value of $237 million, since 2003.) The new administration is also seeking retirement concessions from the union, which represents about 5,500 workers out of 7,500 state employees.

The upshot? At least $12 million in General Fund savings for fiscal year 2012 out of total state and federal expenditures of $440 million for state workers and from private contracts, according to Shumlin and Jeb Spaulding, newly installed secretary of the Agency of Administration.

Shumlin said the steps are necessary to avoid further layoffs and pay cuts in the state’s workforce during the current budgeting cycle as the state faces a $150 million shortfall in FY2012. The hiring freeze is effective immediately; the other proposals would kick in on July 1. Side agreements to the VSEA contracts would be necessary for the health care proposal.

“Vermonters understand that we have to keep our fiscal house in order or we cannot responsibly run state government,” Shumlin said. “We must and we will.”

Shumlin said state workers have made a “tremendous sacrifice” already. As the recession deepened, classified employees agreed to a 3 percent pay cut, exempt employees accepted a 5 percent reduction in pay and 660 positions were eliminated.

Bob Hooper, president of the VSEA, said the union is “eager” to work with Shumlin, and he hailed the administration’s willingness to engage the union in preliminary discussions. He said Gov. Jim Douglas invited VSEA officials to his office once over the course of eight years in office, while Gov. Howard Dean met with the union once a quarter.

Hooper said because of Douglas’ “smaller government ideas,” state workers have had “a tough time delivering the services Vermonters expect.”

“I think it’s great we now have a governor who is willing to talk with us about what needs to happen and how we can make it happen,” Hooper said. “This is the first time we’ve come into the governor’s office in my memory to talk about how things can be done better – and the first time before the ax fell,” Hooper said. “This is a good tone for the administration to be setting. We’re the people who do the jobs, and to some degree getting input is a good thing.”

The union has not taken an official stance on the governor’s plan. VSEA is scheduling regional meetings to discuss the retirement options, “political mobilization” and an upcoming contract campaign in advance of collective bargaining next summer, according to a memo from Hooper to VSEA members.

In the e-mail sent to members on Friday, Hooper, wrote: “While VSEA is committed to working collaboratively with the new administration to identify savings that do not involve layoffs or pay cuts, it is important that we remind all elected officials, as well as the public, that we have already made sacrifices to help with Vermont’s bad economy. In addition, state employees have been doing more and more at the workplace with less and less, even as the need for public services has surged during the
recession. This reality has greatly deteriorated morale.”

In his message, Hooper touted the Shumlin administration’s willingness to cut spending on private contracts.

VSEA threw its support behind Shumlin in his General Election bid for governor; the union backed Sen. Doug Racine, who is now the secretary of the Agency of Human Services, in the Democratic gubernatorial primary.

Hooper said because of Douglas’ “smaller government ideas,” state workers have had “a tough time delivering the services Vermonters expect.”

Hooper pointed to the recent failure of the new eligibility benefits call center for Vermonters seeking food stamps, general assistance and subsidized health care programs as an example. After the computerized “in-take” system was implemented, 20 employee positions in the Department of Children and Families were eliminated. Within weeks of the switch from a regional, in-person service for Vermonters seeking benefits to a computerized system based in Waterbury, a backlog began to form and hundreds of individuals and families had difficulty getting through to DCF workers, hundreds of applications were delayed for more than 30 days (the federal maximum period) and many Vermonters who tried to reinstate benefits were cut off from the system.

Shumlin said he is committed to retaining the workers at the eligibility benefits center, though he said the administration will be looking for vacancies in other areas as workers leave state government.

“I don’t want to pretend to you that we’re not doing this without real concern,” Shumlin said. “At the same time, we have a $150 million budget problem to solve, and as I’ve said, and you’ll get tired of hearing this, we do intend to run state government more like a business, and if you make one-year savings you’ll be back here next year – we do not want to be back here next year, so we’re going to have to make it work.”

Shumlin said he wants to run state government more like a business, and he hopes to find savings through technology and other “efficiencies.” He said recent changes at the Tax Department show how technology can help the state reduce the number of employees needed to provide good service.

“We’re going to try and use management methods and technology to make government more efficient,” Shumlin said. There isn’t a part of state government that couldn’t benefit from this approach, he said.

Details of the proposal

The hiring freeze for classified and exempt employees goes into effect immediately and indefinitely; positions that are federally funded or that are deemed essential will be retained at Secretary Spaulding’s discretion.

About half of the anticipated 500 vacancies in the coming year will be left unfilled. The vacated positions will generate about $4 million to $5 million in savings, or more than a third of the $12 million Shumlin is looking for, according to Spaulding. Though many of the positions are expected to be left vacant by retirees, he said no early retirement proposals are on the table.

A Douglas administration official, who asked not to be identified, said Neale Lunderville, the former Administration secretary, had a similar policy in place — though early on in the recession the union resisted accepting the idea of allowing a reduction in the workforce through attrition.

Though numbers were not available, Shumlin said there were vacancies already that his administration had chosen not to fill.

Spaulding said his agency will look at every position on a case-by-case basis. “This is not a head count exercise, right governor?” Spaulding asked at the press conference. Shumlin replied: “We’re trying to reduce as few heads as we can – we need all the help we can get.”

“What we’re not looking for is for secretaries and commissioners to come in and say, well, I’d rather RIF (reduction in force) somebody else,” Spaulding said.

On the other hand, if a vacant position is deemed necessary, he will encourage administration officials to find “other ongoing savings” in order to keep the slot in place. “We feel it’s the best way to manage state government, and allowing our managers to utilize efficiencies and technology to realize savings,” Spaulding said.

Shumlin made it clear that wherever possible, federally funded positions will be retained.

“In situations where positions are federally funded where we would be penny wise and pound foolish in many cases not to hire that position immediately. We’re going to manage to the money,” Shumlin said.

“We understand we have a shortage of state employees right now,” Shumlin said. “We also understand we’re about to make the problem a little bit worse by not replacing people as they retire, so in terms of the federal funding question, in situations where positions are federally funded where we would be penny wise and pound foolish in many cases not to hire that position immediately. We’re going to manage to the money.”

Employees would be paid less, based on the time arrangement with management, and retain health benefits.

The Shumlin administration estimates the state would save $2 million through this voluntary proposal, though there were no estimates available on the number of state employees who might use the furlough program. There are no details yet on how the proposal would be implemented.

VSEA President Hooper said a furlough proposal was rejected by the Douglas administration.

“From my perspective, it makes sense to have trained people take off periods of time rather than laying people off,” Hooper said. “In the context of it being a voluntary work reduction — for someone with grandkids who wants to spend a few days at home or somebody with newborns – it’s great for a diverse workforce that has different needs.”

Hooper said the union floated the flex time idea with members a few years ago and received a positive response.

Spaulding has projected the state can save at least $2 million on health insurance costs for state employees by looking at the current medical care packages. The state, he said, currently pays 80 percent of the cost for insurance, on four different levels of health care, including what he called the “Cadillac” plan. He proposes that state continue to pay 80 percent on a mid-level plan, and “if you want the gold-plated plan, you pay the extra.”

Spaulding said there could be savings in the drug portion of the health package.

“The last time they (the state and the union) looked at this, they generated $30 million worth of savings,” Spaulding said.

Hooper said when the union and the state last looked at health care options 15 years ago, they redesigned the plan based on national trends.

New-found savings, he said, would benefit everyone.

The Shumlin administration proposes a “benefit recalibration” and new contribution levels for the state workers retirement system, similar to the agreement struck with teachers last year. Spaulding says these changes would result in a $2 million reduction in General Fund contributions to the retirement fund.

Hooper says state employees began paying more into the pension fund in 2007. He said the reason the administration wants to look at the retirement system again is because of a drop in pension assets as a result of the Wall Street declines. Shumlin is looking for a “second bite of the apple,” Hooper said.

“We’ve been talking about some ability to assist,” Hooper said.

Thanks for reporting an error with the story, "Story + video: With $150M to whittle, Shumlin proposes first $12M cut..."