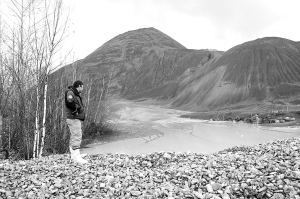 A mountain of asbestos tailings at the former Vermont Asbestos Group mine in Lowell. This photo, taken in November of 2007, shows Gary Lipson of the federal Environmental Protection Agency looking over a gray pool of runoff from the mine tailings. Photo by Bethany M. Dunbar

Editor's note: This story first appeared in the Barton Chronicle.

For decades, a couple of giant piles of asbestos tailings have loomed over the remnants of the once thriving Vermont Asbestos Group (VAG) mine in Lowell and Eden.

The mine closed in 1993 because of a sharply diminished market for asbestos due to health concerns. What remains of what was once the biggest asbestos mine in the United States -- and by the late 1980s one of only two in the country -- is roughly 50 to 70 million tons of tailings. State and federal officials are trying to prevent the asbestos from migrating off the site and contaminating air or water.

But what if, somehow, all that toxic waste was rendered innocuous? That’s the question Hannah McHardy is trying to answer.

In January, while in her final year at Sterling in Craftsbury Common, McHardy became interested in the tailings that remain at the former mine and the problems they pose in the way of cleanup.

With assistance from Professor Charlotte Rosendahl, Ms. McHardy began researching strains of fungi in hopes of finding one that breaks down chrysotile asbestos.

Ms. McHardy said her work builds on research started about a decade ago in Italy. She said her research has two aims: to find out whether the fungal species identified by the University of Turin in Italy to break down chrysotile asbestos naturally occurs in the asbestos-laden soil at the VAG mine, and to determine the extent of morphological changes to chrysotile asbestos fibers from the mine when they're incubated with native fungi.

That's the scientific way of saying that Ms. McHardy is looking for fungi that will essentially "eat" the asbestos.

The Italian research was done on the same type of asbestos found in the Lowell mine, Ms. McHardy said.

Asbestos' toxicity to humans is related to its needle-like structure. Some species of fungi have been found to remove magnesium, silica, and iron from the chrysotile fibers, thus affecting their structure.

"We're experimenting with the fungi and asbestos native to the mine site to see if there's a morphological change in the asbestos fibers after the fungi remove these minerals," she said. "If the asbestos is rendered amorphous, meaning it no longer has its needle-like structure, then it may no longer pose a toxic risk to humans.

"When it comes to cleaning up toxic waste, scientists keep finding that nature knows best," Ms. McHardy said. "By mimicking nature's adaptive processes, the VAG mine site could be remediated using less equipment and labor, and with less disturbance of asbestos into the air."

Howard Manosh, an owner of the mine, attended Ms. McHardy's senior research presentation about the project, got interested, and contributed money to continue the work.

"I think it's worth examining," Mr. Manosh said about the research. "She's pretty sharp. I think she might possibly come up with something that will help. I don't know that it's the end-all solution."

Ms. McHardy said that she and Dr. Rosendahl are still waiting on the results of their research so far. "If our hypothesis is correct, then plot tests at the site would be necessary before the fungal bioremediation technique could be adopted at the asbestos mine."

Ms. McHardy, a former conservation ecology major, said she became interested in the VAG mine site in 2008 after the Vermont Health Department issued an alarming report suggesting that living near the mine could cause fatal asbestosis.

The report was retracted after the health department found that five area deaths from asbestosis between 1996 and 2005 could be explained by work exposure. Two of the people had the disease before they moved to Vermont.

The VAG mine is a potential Superfund site, and millions of dollars have been spent dealing with the tailings. According to an Environmental Protection Agency estimate in 2007, it would cost $500 million to cover the tailing piles so they would no longer erode.

Ms. McHardy said the field of bioremediation - using fungi and bacteria to break down toxic substances - is growing rapidly. Bioremediation has been used at about 50 Superfund sites across the U.S.

Vermont Asbestos Group bought the 1,200 acre mine in 1974. Manosh, who said he owns 2 percent of the shares, had been its president. He called himself "the last man standing up there."

"We were milling at about 175 tons of ore per hour," he said. "Out of that, we only got a 3 percent recovery rate of fiber, and the rest all went to waste. When you're running 24 hours a day, seven days a week, the waste piles get pretty big. We did that for 44 years."

Government agencies seem inclined to want to put the asbestos tailings back where they came from, Mr. Manosh said, an idea he doesn't agree with. "After it sets there, it crusts over so you don't get the airborne particles," he said. "If you start working on it and digging in it, it stirs it up again."

He said he's optimistic about Ms. McHardy's research. "It's a shot. Good as any. It seems like a huge task to get anything to work."

Thanks for reporting an error with the story, "Fungi to the rescue? Sterling grad wants to render asbestos nontoxic"