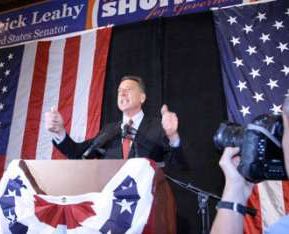 Editor’s note: This story is by Patrick Joy, a freelance writer who lives in Montpelier. More detail and video will be added on Wednesday.

Republican faithful filed out of the Capitol Plaza Hotel after midnight, their party over but the largest race too close to officially call.

While Democrat Peter Shumlin held a 4,494 vote lead with 94.4% of precincts reporting, according to WCAX News, Republican candidate Brian Dubie left without a concession and Shumlin did not declare victory.

Shumlin, however, appeared poised to take the state’s top job and looked likely to surpass the 50% threshold to keep the race out of the legislature.

Dubie addressed his supporters just before midnight, and said the race was too close to call.

“I’m not here to declare victory – but to say thank you and express gratitude and appreciation to the people who contributed to this positive campaign,” he said.

Republican energy at the GOP party at the GOP headquarters rose and fell all night with the steady stream of poll numbers rolling in from news sources.

Dubie built an early lead, but Shumlin closed steadily as southern Vermont numbers trickled in. Anxious members of the party faithful wondered aloud whether Dubie could get enough independents to hold on, or whether Democratic turnout might be low enough to carry the day. For an hour, the lead traded back and forth with every update, often by only a handful of votes. Cheers went up every time Dubie was ahead, while Shumlin leads were met with frowns and boos. 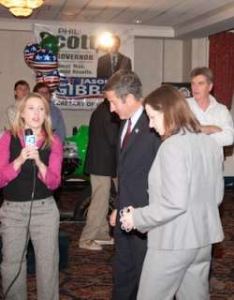 Dubie, center, talks with a reporter

Supporters moved back and forth between the TV screens at the head of the room and the mobile station at the WCAX press table.

The crowd swelled to more than 300 just before Dubie spoke, and emptied steadily as the numbers slowed.

Dubie said he thought his message of economic solutions for a troubled economy resonated with voters.

“Vermonters are looking for solutions,” he said. “We are losing too many young Vermonters. We have been focused on a 10-point jobs plan.”

Dubie said he hoped to return to the podium later in the night, but apparently left for his home in Essex sometime just after midnight.

“I think he’ll pull this one out of the trenches,” he said.

Gov. James Douglas said there was nothing to do but wait.

“I talked with [Brian] earlier today and told him that there was nothing he could do [since the votes had been cast],” Douglas said.

Douglas carried that message with him to the podium.

“I am darn proud of him,” said Douglas. “Now, we’ll just keep biting our fingernails.”

Thanks for reporting an error with the story, "Story + video: Vermont governor’s race too close to call"