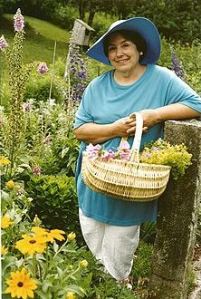 Editor's note: This article is by Peter Dannenberg, a resident of Cabot.

Tiny Vermont has its share of year-round and seasonal residents whose achievements influence life beyond our borders. On Aug. 22, we lost one. Dorothy Sucher, a renaissance woman—mystery writer, journalist, essayist, writing teacher, watercolorist, feminist, freedom of the press champion and psychotherapist—died at her home in Silver Spring, Md., at age 77.

Until 2009, Sucher and husband Joseph, professor emeritus of physics at the University of Maryland, owned a home in Cabot, Vt., where they spent half the year. In her 1999 collection of essays, “The Invisible Garden” she wrote about transforming the old blue farmhouse by a stream and its 10 overgrown acres into a summer home with flower gardens.

Sucher knew nothing of gardening when she started. She wrote with humor and a psychotherapist’s insight about the hard work and the people she met. Rural ways were new to an urban woman. With the help of her Cabot neighbors, she learned gardening was both harder and more rewarding than she imagined.

For four years, she was treasurer of Sisters in Crime, an international group of female mystery writers. She founded a Maryland chapter. Sucher taught creative writing in the late 1980s and early 1990s at Duke University, Georgetown University and the Writer’s Center in Bethesda, Md. She also led a summertime memoir-writing workshop at Twin Valley Senior Center in Marshfield, Vt. Her insights and coaching helped many new writers. Both Dorothy and Joseph were members of the Cabot Historical Society.

Sucher was most widely known for a freedom of the press lawsuit that became a U.S. Supreme Court test case. She was a $5 a week columnist for the weekly Greenbelt News Review in 1965. She covered a Greenbelt (Md.) City Council Meeting. The city wanted to buy land from a developer to build a high school. The developer rejected the offer, but said he would reconsider, if the city would rezone two other properties he owned. Several people said that was “blackmail,” and Sucher quoted them.

The developer, who was a state delegate, sued for libel. A county court ruled against the paper. The Maryland Court of Appeals agreed. In 1970, the U.S. Supreme Court overturned the verdict unanimously. Justice Potter Stewart wrote that readers would know that “blackmail” was “a vigorous epithet” made in heated debate. The newspaper could use the word, because there was no intent to accuse the developer of being a criminal and journalists may report events that happened at a public meeting. Sucher started a book about the four years she spent fighting the lawsuit, but it is unpublished.

Sucher continued with the Greenbelt News Review until 2004. She was editor in chief for two years. She practiced as a psychotherapist for 12 years in Washington, D.C. and Maryland. At age 70, she returned to an early love, art, and exhibited and sold watercolor landscapes and paintings of flowers.

Joseph, her husband of 58 years, two sons, Gabriel and Anatol and a granddaughter, survive Sucher. Two other children predeceased her.

Thanks for reporting an error with the story, "In Memoriam: Dorothy Sucher wove together the art of living and writi..."