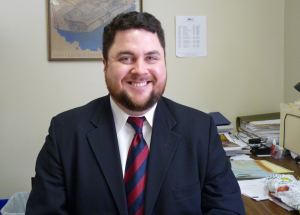 Robert Dempsey still loves nuts-and-bolts politics after 10 years of working on Democratic campaigns. He puts his faith in solid groundwork, as opposed to a Web presence and social networking. “In 2004, all the talk was about ‘meet ups’,” Dempsey said. “Where are they now?”
Dempsey is devoted to the party, as he puts it, “with a stronger commitment to social issues,” and he’s tackling a job that reportedly languished while the Vermont Democratic Party went without an official ED for a year.

The 35-year-old Dempsey, who was hired for the ED role 9 months ago, calls himself a “political operative” whose job is to provide a new structure for the party in Vermont, after three failed attempts to defeat Gov. Jim Douglas. His test? Helping a Democrat beat out Douglas’ chosen successor: Well-known Lt. Gov. Brian Dubie, who faces no primary challenger.

With five candidates in the running for the Democratic ticket, Dempsey’s task isn’t going to be easy. He attributes the number of candidates to the opening provided when Douglas decided not to run again and to the fact that “incumbency does really seem to carry quite a bit of sway in this state.”

No matter how well-maintained the party machinery is, many observers see this embarrassment of riches as a stumbling block for the Democrats. From now until the primary, the candidates are in the awkward position of having to clarify what each of them stands for without engaging in personal attacks or tearing at opponents’ records.

How will the party get voters enthused about an election with five candidates who, so far, haven’t very convincingly differentiated themselves from one another? Dempsey’s instant response is: “I would tend to look at that in almost exactly the opposite way. Right now it’s all our candidates all of the time and I actually see that as a positive.”
Dempsey says a win this year depends on building an “apparatus that our eventual nominee will then plug into in order to be successful in November.”

Dempsey says a win this year depends on building an “apparatus that our eventual nominee will then plug into in order to be successful in November.”

“What makes an effective state party is really effective county parties,” Dempsey said. “I take a bottom-up approach. My understanding is that historically there hasn't been that structure, that apparatus that I was talking about.”

Dempsey says when Judy Bevans, the Democratic Party chair, hired him, she wanted to take the party in a different direction. And how would he characterize the old direction? “Not having been here, I don’t know if it’s necessarily fair for me to characterize it. I just know that we did not win the gubernatorial election [in a year] when Barack Obama got 67 percent of the vote and yet we have a Republican governor.” (In 2008, in a three-way race, Democrat Gaye Symington tied with Anthony Pollina, the Independent and sometime Progressive, and together they trailed the tally for incumbent governor Jim Douglas by 30,000 ballots. Douglas won with over 53 percent of the vote.

Dempsey is part of the band of migratory hired hands the national party draws on for campaign work. “It's really a small group, a fraternity … of folks who do what I do.”

Dempsey’s credentials include 10 years of political work in the Midwest, beginning in Buffalo, where he grew up and went to college. After graduation from SUNY-Buffalo, Dempsey worked on Mike Coleman's mayoral campaign in Columbus, Ohio (Coleman won, becoming the first African-American mayor of Columbus), then was hired by Kalamazoo Against Discrimination to help defeat a ballot initiative that was aimed at same-sex couples— though the proposal would have eliminated health care and other benefits for city employees’ domestic partners of either sex. Afterward, he worked as a regional representative for Rep. Marcy Kaptur in Ohio.

In 2006, Dempsey became political director for the Senate Democrats in Ohio. This led to his last job, Midwest Candidate Services director for the Democratic Congressional Campaign Committee, based in Washington, in which he consulted with 40 different campaigns.

Dempsey is part of the band of migratory hired hands the national party draws on for campaign work. “It's really a small group, a fraternity … of folks who do what I do.”

Coming from a large family—he's the 9th of 11 children—it's perhaps not surprising that he has an assertive, though low-key, manner and is ready with a fast flow of words that sometimes drowns out the subject in question. His voluble replies seem to reflect his determination not to put a foot wrong, but also serve to generalize an answer to the point that it is sometimes hard to tell if you’ve gotten one. In over an hour, Dempsey was not drawn into talking about issues, though he talked about how important issues are.

Is he employing innovative methods for building a stronger Democratic Party apparatus in Vermont? Dempsey says he sticks with the tried-and-true. “It goes back to working with the county parties to make sure they're reaching out to local people who maybe aren't involved, but they think could be. So it's reaching out to clubs, reaching out to your neighbor, reaching out to family members, reaching out to people in grocery stores. That's not something I can do. … That's just a certain kind of outreach that has to happen at the local level.”

His role is to get to know leaders and activists on the town, county and state committees, giving them the tools to recruit members and keeping them up to snuff on what’s happening in the Legislature, “making sure that people know we're the party that's fighting on behalf of working families, that we're the party that actually made sure we had a balanced budget last cycle.”

This kind of day-to-day work makes demands that are different from campaigns, with their built-in deadlines, in which you can only hope the infrastructure will hold. “Working on campaigns and being on the other side, [thinking about] what would I like to have seen county parties do, what would I like to have seen state parties do—now I actually have a chance to be the change I always wanted to see, to paraphrase St. Francis of Assisi,” he says with a laugh.

Is he out fundraising yet? “The business of the Party is to get their candidates elected. But, right now, prior to the primary, we take a hands-off approach. They raise their own money.” Why leave fundraising to the candidates? “We let the people decide. That's democracy. …I think that if you have the best ideas … if you truly reflect what it is that people think and feel, more people will support you, you'll get more money, you'll ultimately get more votes and that's what it's about. It's not about anointing someone, it's not about saying 'OK, it's your turn' or christening someone, it's about people earning…voters’ trust, earning people's trust, and then actually hoping that they have the ability to govern well.”

Dempsey sees another upside to the candidates’ having to do their own fundraising up to the primary vote. “If you can't put a campaign team together…and go out and raise money and win votes, how effective of an elected official will you be?”

The party approves of, but doesn’t formally support, the new group, “Vermonters for a Democratic Governor,” whose mission is to get Dubie’s record before the public, he said.

There is plenty for the state party’s No. 1 political operative to do in anticipation of the General Election. Dempsey compares his job to herding … Democats, one might say. There is the non-election year job of getting the town committees, county committees and state committee qualified, as required by Vermont statute. In an election year, there is the problem of attempting to target campaigns at voters who aren’t required to register by party affiliation. “There are maybe 450,000 people registered [to vote] in this state and theoretically they could all be Democrats or Republicans or otherwise…. They’re just registered voters, so how do we start?” (The “voting eligible population” was 487,430 in 2008 with 453,011 registered to vote by Election Day, Nov 4, 2008.)

Dempsey sees the Democrats’ previous lack of interest in opposition research as a significant weakness: He said investing in an analysis of Douglas’ record could have led to the defeat of the four-term governor in the last election cycle. The party approves of, but doesn’t formally support, the new group, “Vermonters for a Democratic Governor,” whose mission is to get Dubie’s record before the public, he said.

Dempsey asserts that the Republican gubernatorial candidate hasn’t done enough to qualify for the job. "Certainly in his role as lieutenant governor, he hasn't had a lot of responsibility. Maybe he's done a good job, but a good job at what, flying planes and opening up grocery stores? Are these the qualities that we really want in a governor? I don't think so. I mean right now we have a very qualified set of former (and present) elected officials that have actually had to make difficult decisions and have had to make very difficult votes--administrative background in the case of Secretary Markowitz."

Dempsey projects an overall optimism and perhaps even idealism about politics. If his seeming excitement about door-to-door campaign work is communicated to his staff and volunteers, it could be just as valuable as the skills he has accumulated in the political vineyards. Thanks for reporting an error with the story, "The People Behind the Parties: Robert Dempsey, ED of the Vermont Demo..."