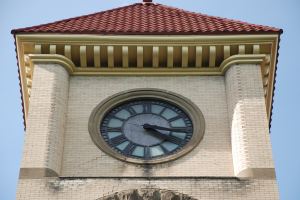 Editor’s note: This is a simultaneous complaint and defense of lack of scheduling, by Luna Larkin, who is in no way staying up past her bedtime. In the daytime, she is a student at U-32 High School.

It’s official: I have no time-management skills. Somewhere, fifteen years ago, an overworked soul-accountant wrote the computer code for my personality and added a few too many ones into my binary, and now I’m late for everything.

It’s never more than fifteen minutes, of course, and it’s usually closer to two; it’s that almost-excusable window in which I worry far too much about my notebook collection, not enough about my spare underwear, and inevitably arrive at a sleepover in which my friends and I sit and watch Naruto for four hours in our pajamas.

In the tradition of paradoxically self-aware and shallow teenaged prose, I must mention that I am writing this two hours before my deadline– “before next Monday”– technically arrives. I’ve always found it interesting (and occasionally frustrating) that I can’t work on long-term projects, and the only person who ever explained my situation properly was Calvin, of Calvin and Hobbes, who complained that his teacher had given him a whole weekend to work on his project. This was a cruel measure. Calvin was going to do it at the very last minute, but his teacher had given him an entire weekend to worry about it. In case you have missed my subtle point, his philosophy is my creed. But then, I don’t think you have.

I’m sure there’s some belabored accountant — possibly the one responsible for my untimeliness — who identifies with my complaint, who types his spreadsheets minutes before meetings, and who has perfected his morning schedule to arrive exactly two minutes before his workday begins. In fact, from what I’ve gathered during my daily– hourly– Internet outings, that is most of what accountants do. However, the spreadsheets are, in fact, inevitably finished. The accountant arrives to work on time, and I am never horribly late.

In November of 2009, I participated in NaNoWriMo, or the National Novel Writing Month, in which the participant is given one month to write fifty thousand words. There’s a handy little section at the top of every page which I used to update my word count. Each account had a graph of the writer’s progress over time: mine looked awfully like a muffin. If the appropriate picture is not particularly forthcoming, it is because I am imagining one of my muffins, which have never turned out well; a better image might be of a graph that begins with a gentle slope with a stunted growth of differing degrees of two thousand words, followed by a vast area one might aptly compare to a straight line, until the last five days of November, in which I panicked and wrote most of my novel. This section also resembled a straight line, but for the fact that it was vertical, rather than horizontal.

The point of all this — aside from my innate desire to inform everyone that I wrote a novel in a month — is that I met the deadline with fifty thousand, six hundred ten words. A month is an awfully short time in which to write a novel, but I procrastinated, anyway. Had I been given a week, I probably would have attempted to write the whole thing in the last three days. To rephrase: It doesn’t matter that I procrastinated. I got it done.

I’m not going to insert the obligatory rhetorical question, because my mother asks me lots of them — and no, I don’t want any more spinach, thank you — but if I were, I would ask, “Is it really an issue if I’m only two minutes early, if I agonize over my paper-backed versus my leather-bound journals until I arrive exactly on time, if I miss the Tom Cruise trivia but sneak cake into the movie theater?” Were I to answer this, I would say, “Of course not, if the job gets done, and you’re polite about it.”

Unfortunately, that same accountant clearly programmed my mother. She disagrees, and is now forcing me to set my alarm clock fifteen minutes earlier than it was before. Apparently, breakfast is important. (Hey! I eat it! Just … at school. During class. Y’know. It gets eaten! My teachers don’t mind. Really. Not usually. Aww, man! Toast again? Can’t I have a cinnamon bun?)

Thanks for reporting an error with the story, "First person singular: Late to life, again"