Anuzzo, one of the Quirkies, dies at age 11

On the morning of February 14th, Vermont’s Canine Ambassador Anuzzo, stepped away at the age of 11 concluding a rapid bout with colon cancer. He left exactly as he lived much of his life at The Quirky Pet on State in Montpelier; on his side with his head lifted to receive affection before returning to sleep.

Anuzzo was a third of Montpelier’s Legendary Bergamascos along with niece Cuba and lifelong companion Aria.

Over 10,000 have had pictures taken with Anuzzo making him the most photographed dog in all of New England and arguably the United States. Last summer, Yankee Magazine’s New England Travel Guide, named Anuzzo as one of the five most adoptable dogs in New England along with Stephen King’s corgi, Thomas the Connecticut Husky mascot and the lab from Boston’s tony Copley Plaza. Quite an honor for a sheepdog from a Vermont town of only 7,500.

Behind every public figure lies a back story. In Anuzzo’s case, his first year of life was spent in a very awkward homing that resulted in him returning to his breeder; an emotionally scarred puppy returned to a sheltered life as the shy, reserved ‘sweet dog’ in the nurturing company of his mother, father, lifelong companion Aria and three other Bergamasco sheepdogs. Wanting more for him, his breeder reached out to rehome her ‘sweet dog’ in Montpelier with his niece Cuba. For well over a year, Anuzzo’s fear of life in general was a crippling barrier. His fear of walking in the dark. His fear of Hubbard Park creeks. His debilitating fear of strangers. Step by step, a very private, shy dog worked his way through his phobia package to become Vermont’s most public dog and arguably it’s most beloved. His state’s Canine Ambassador.

Anuzzo’s true calling was as the shop dog whose notoriety was found outside the confines of the small Montpelier pet shop where he worked. He was to become a fixture on the Church Street Marketplace. Every third Saturday when the weather was half way agreeable, 250-500 people would take their picture with him. It was on Church Street that Anuzzo discovered his unusual capacity for radiating pure love. A dog fearful of strangers went on to become the object of the affection of strangers. Over 10,000 strangers in all. In particular, he was loved by children. They would pull his hair back in a man bun to see his eyes. Elementary school girls would bring ribbons to the pet shop where he worked. They would braid his hair. Very little people would sit astride him. There was no indignity that kids hadn’t borne on this dog… and he loved it all.

Church Street was soon to become Church Street and the Cold Hollow Cider Mill and then down the road a piece to Ben And Jerry’s Factory as well. It was on to the festivals and the farmers markets. A most unusual looking dog seemed to fit right in at Comic Cons. As one little boy of seven or eight called out to his mom, “It’s Chewbacca on all fours”.

It is difficult to describe what he would do. He would sort of…. lie there on his side with his head cocked directly at those near him; looking up with an odd kind of smile. People of all ages read that as ‘pet me’. Everyone instinctively understood what needed to be done. The batted paw was the clear message ‘more’. They then took hold of his symbolic leash and smiled for their family and friend’s cell phones. They got their sticker with Anuzzo on it. All walked away broadly smiling. In a state that prides itself in its inner quirky, Anuzzo stood out not only for tourists but also for thousands and thousands of us who live here. The once painfully shy dog who feared life itself up front sharing his charmed life, repping the brave little state we all hold dear. Our home.

Natalie Hemby isn’t that well known. A couple of her songs are sung by Lady Gaga in the recent version of A Star Is Born and she penned a few country hits for Miranda Lambert and Little Big Town. This is a YouTube link to an in studio video of a touching ballad co-written with fellow Nashville singer/songwriter Kacey Musgraves. It offers perspective.

For many in North Central Vermont, it has been a life changing experience living proximate to an animal who bravely put away his sheltering umbrella only to discover the beauty of a totally unexpected radiant rainbow that had always been over his head. His revelation resulted in a life devoted to sharing his incredible rainbow with total strangers in a spirit of endless generosity that never failed to leave others smiling and feeling far better for their shared experience. Anuzzo’s life became a living testimony to the enduring truth that the love you take is equal to the love you make. It is worth taking the time to read the loving tributes on the Quirky Pet Facebook page. Improbably, a lethargic Vermont sheepdog deeply touched the hearts of so many. With tourism involved, the tributes are coming from all over the world.

It is little known outside of Montpelier that in the day, Anuzzo and buddies Cuba and Aria as The Quirkies created a cultural sensation that literally swept the world. There is no more fitting tribute to the big grey guy than for you to choose to view his short YouTube video—- Reliving Quirkymania! 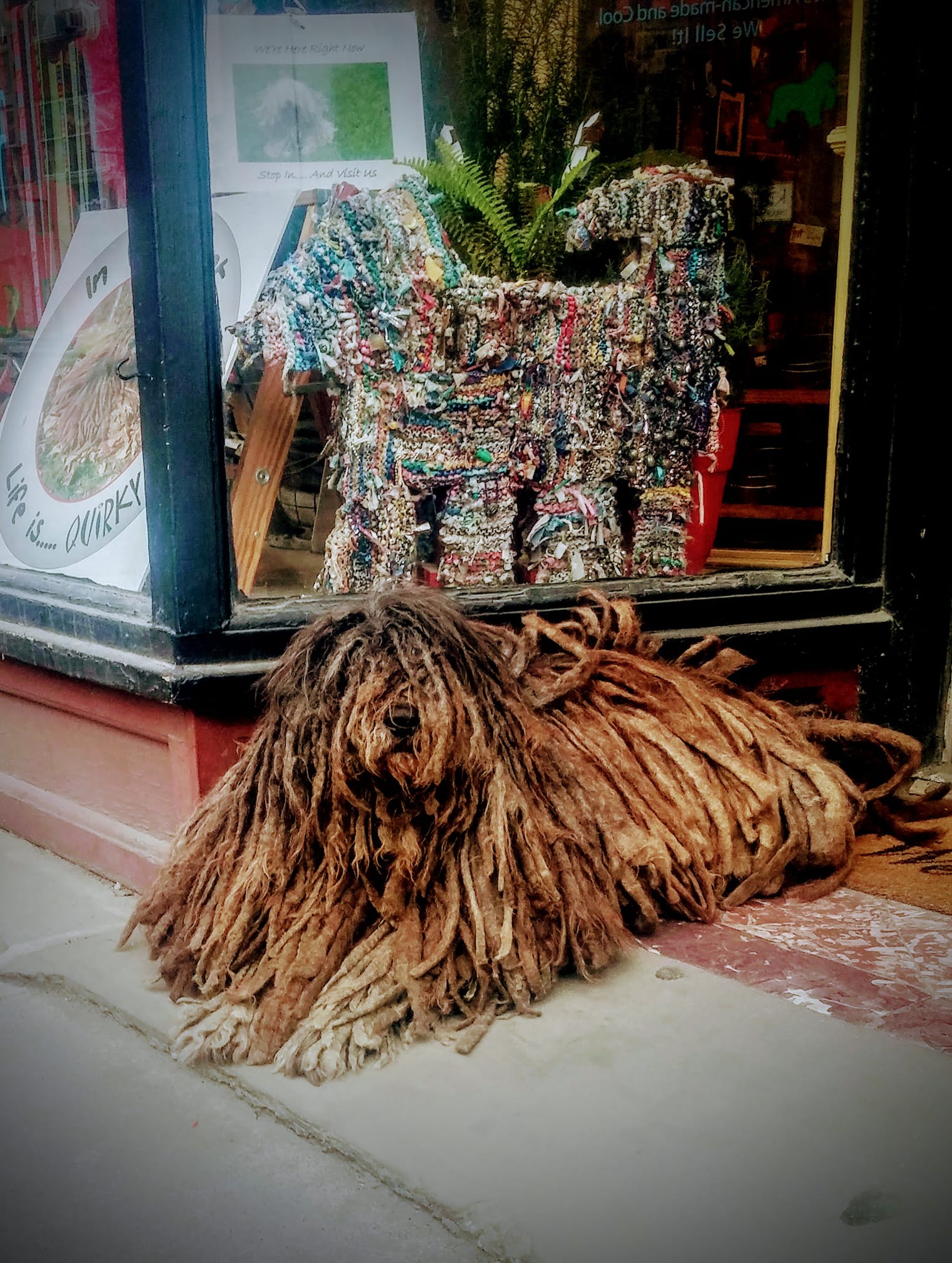