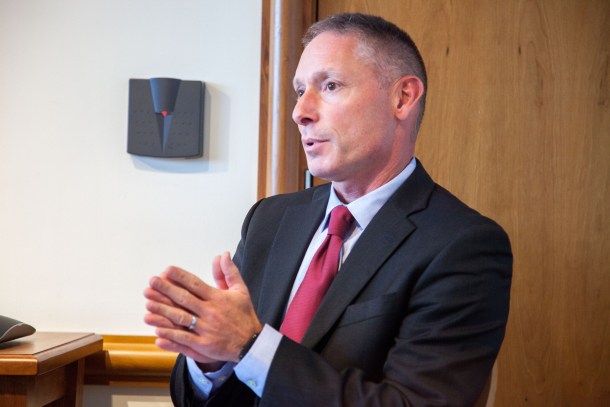 Scott also announced Monday the appointment of Labor Commissioner Lindsay Kurrle to replace Schirling in the top post at the Agency of Commerce and Community Development.

Schirling has served as agency secretary since Scott took office in 2017.

“Both Lindsay and Mike have been incredibly valuable members of our team, working together to support – and attract more – employers and employees and tackle some of Vermont’s top economic and workforce priorities,” Scott said in a statement announcing the appointments.

“Their leadership in these new roles will be tremendously important to the state’s work to grow the economy, make Vermont more affordable and protect the most vulnerable.”

Lindsay Kurrle, the commissioner of the Department of Labor. Photo by Erin Mansfield/VTDigger

Before taking a role in the Scott administration, Schirling worked in the Burlington Police Department for 25 years and served as chief between 2008 and 2015.

In an interview Monday, Schirling said he didn’t have a “preconceived notion” of the direction he wanted to take the state police, or other divisions within the department. But he said he did not the see the need for any “substantive changes.”

He added that he has been impressed at the “innovations and modernization” the state police have put forth, including their fair and impartial policing policy.

Before she served as labor commissioner, Kurrle managed operations at Kurrle Fuels and Transports, a business in Montpelier she co-owned with her husband. She also previously worked at Central Vermont Home Health and Hospice and for the state of Vermont as assistant director of statewide financial reporting.

“I am excited to bring my experience as a small business owner and knowledge of state and federal workforce system to ACCD, and I look forward to joining the exceptional team there to continue this good work,” Kurrle said in a statement.

Sen. Dick Sears, D-Bennington, chair of the Senate Judiciary Committee, said Schirling was open to criminal justice reforms during his time as chief of the Burlington Police Department, including pre-trial and pre-charge diversion for criminal offenders.

“He looked at diversion and alternative justice issues, and so I look forward to working with him as the new commissioner of public safety,” Sears said.

The senator added that Schirling was among the first law enforcement leaders in the state to discuss alternatives to arrest for low level drug offenders, as the state faced a growing opioid crisis.

“He was one of the early ones to talk about ‘We can’t arrest our way out of this drug problem,’” Sears said. 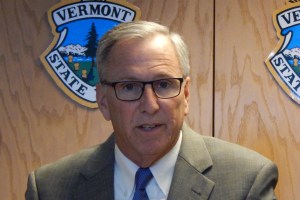 Schirling said Monday that it was too early for him to take a stand on the criminal justice reform debates playing out in the Vermont Legislature, such as expanding marijuana legalization, decriminalization of buprenorphine or cutting the state’s prison population.

But he said that in general, it’s important to put reforms “in balance” with the workings of the traditional criminal justice system.

“There are ways to do community and restorative justice, there are ways to move the justice system forward that will help to achieve better outcomes,” Schirling said. “But what’s important to note and sometimes gets lost in the conversation is that we have a brilliantly constructed criminal justice system.”

Anderson, Schirling’s predecessor, came under criticism from Democrats and advocates on the left for opposing some proposals to reform the criminal justice system — particularly drug policy.

Anderson opposed legalizing a market for marijuana sales unless lawmakers also allowed police officers to use saliva tests on drivers they suspect to be impaired. He also fought an effort to decriminalize buprenorphine backed by some Democrats and Progressives in the House.

Attorney General TJ Donovan, a Democrat who served as the Chittenden County’s state’s attorney while Schirling was police chief in Burlington, said Schirling will be able to maintain the “steady work that’s going on at the state police.”

He said that Schirling is a “progressive guy” with a “big heart” who was likely open to new reforms.

“I think Mike would acknowledge, as many law enforcement have, that what we’ve done over the last 20-30 years hasn’t exactly worked,” Donovan said.

But he said that whether the Scott administration becomes open to reforms won’t be up to Schirling, but the governor himself.

“I think Mike is a really open-minded guy and I don’t think the question is what he thinks, I think it’s what the governor thinks,” he said. “I think it starts from the top and comes down.”

Thanks for reporting an error with the story, "Scott names Michael Schirling to lead Public Safety Department"