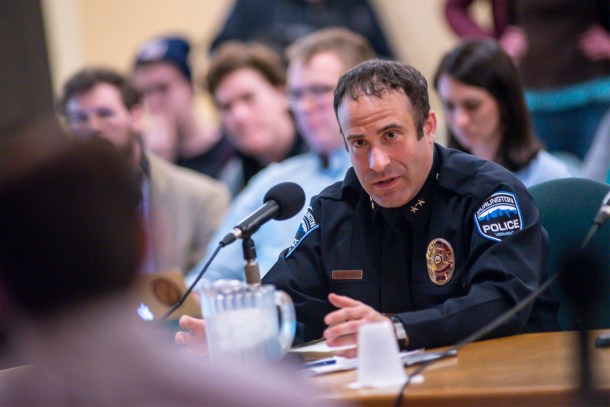 Burlington Police Chief Brandon del Pozo discusses the department's use of force policy before the Burlington City Council on May 13. Photo by Glenn Russell/VTDigger

[B]URLINGTON – Police are denying use of excessive force in a lawsuit brought by three brothers and another man, all of whom are black, alleging police brutality.

The lawsuits were filed in federal court in May in response to incidents which occurred on two September nights last year. One officer involved, Sgt. Jason Bellavance, was suspended without pay for an undisclosed period of time of less than three weeks. The other officer, Joe Corrow, did not face any disciplinary action.

Brothers Jeremie, Charlie and Albin Meli filed one of the suits. Mabior Jok filed the other. Videos were released of both incidents showing police using physical force against the men when upon confronting them outside Burlignton bars.

The Burlington Police Department filed responses to both cases in U.S. District Court on Monday. In the filings, the department denies its officers used excessive force or violated any clearly established laws.

Police engaged with the Meli brothers after responding to a call at What Ale’s You around midnight on Sept. 9, 2018, after the bar’s owner Sinan Eren called the police. Bellavance’s body camera footage, released by the department in May, shows Eren pointing his hand into Jeremie Meli’s chest.

Later, after officers had handcuffed Jeremie Meli, who had regained consciousness, Albin Meli puts his hand on Officer Cory Campbell’s shoulder and asks, “I’m sorry to say this, but can you please tell them to stop?”

Bellavance and Campbell then pull Albin Meli to the ground. Medics later arrived on the scene to treat Jeremie Meli, and were told by Bellavance he lost consciousness.

All three brothers faced charges related to the incident at the bar, but the cases were later dismissed for undisclosed reasons. Jeremie Meli faced an additional assault charge because a bartender at What Ale’s You said that Meli punched him in the face as he tried to escort him from the bar. That charge was later dropped after the bartender didn’t cooperate with prosecutors.

The response filed by Burlington police on Monday admits that Bellavance pushed Jeremie Meli to the ground, and that he hit his head against the wall as he fell. However, the department denies that the sound heard on the body camera was Meli’s head hitting the wall and rejects any use of excessive force or violation of laws.

“Jeremie was taken by surprise and unprepared for the blow from Bellavance,” states the lawsuit filed by the Meli brothers. “Jeremie fell backwards striking his head on a wall, which rendered him unconscious. The sound of Jeremie’s head hitting the wall and his eyes rolling back into his head can be clearly heard and seen on Bellavance’s body camera.”

Police also deny that there was substantial evidence Jeremie Meli had suffered a serious brain injury during the incident.

In response to the claims brought by Albin Meli, police say they had a “legitimate law enforcement basis” for tackling him to the ground after he placed his hand on Campbell.

After the lawsuits were filed in May, Burlington Police Chief Brandon del Pozo told reporters at a press conference the response by Bellavance deviated from directives.

"Our investigation substantiated the finding that the use of force by one of our sergeants was unnecessary ...,” del Pozo said. “We assert that it deviated unreasonably from his training and our expectation.”

Del Pozo, reached by phone Tuesday afternoon, said he was unfamiliar with the details of the filings and did not get back to a reporter later in the day.

Evan Chadwick, the lawyer representing the Meli brothers, was not immediately available for comment on Tuesday. Another partner in his firm is representing Jok.

In the second lawsuit, Jok accuses officers of violating his rights and causing physical and mental damage on Sept. 8, 2019.

Police body camera footage shows Officer Joe Corrow approaching Jok outside of Manhattan’s Pizza on Main Street. Corrow can be heard in the video saying that he saw Jok punch a man before approaching him.

Jok is then tackled by the officer, which he alleges in the lawsuit rendered him unconscious.

The footage shows a pool of blood as Jok lays on the ground and bystanders approach the scene, seemingly appalled by the incident.

After appearing to regain consciousness, Jok tells the officer “you slammed me.”

Jok is then taken away on a stretcher to receive medical attention.

Del Pozo said during the May press conference that Corrow used force to break up a fight. He said in the future, the department will advise officers to call for backup and use verbal warnings when breaking up physical conflicts.

In the city’s response to the suit, it says the entire arrest was not captured on video and that the footage and audio accurately reflect what Corrow was perceiving. Police also deny the accuracy of two reports from witnesses at the scene of the incident.

Thanks for reporting an error with the story, "Burlington police deny excessive use of force in response to lawsuits"