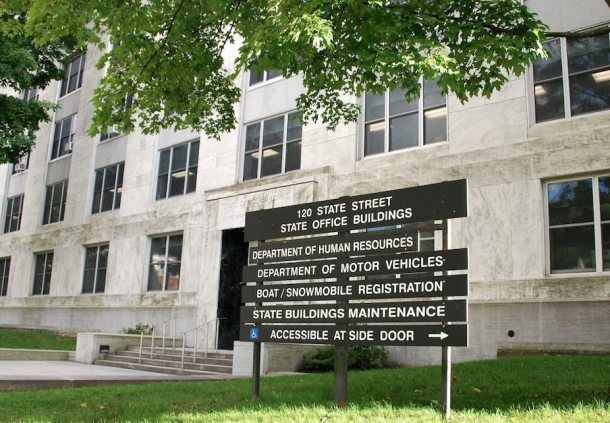 The Department of Motor Vehicles in Montpelier. File photo by Elizabeth Hewitt/VTDigger

[T]he Department of Motor Vehicles is debuting a new style of driver’s licenses and ID cards this month, updating the licenses’ security measures for the first time in 15 years.

The new licenses will feature a revamped design, enhanced safety mechanisms, and the option to select a third gender beyond male or female.

According to a press release from DMV commissioner Wanda Minoli, security is the primary reason for the new licenses. Vermont licenses’ safety features were last updated in 2004, and the older system is no longer maximally effective against counterfeiting and fraud.

“The new licenses are more secure and designed to protect better against fraud and identity theft,” Minoli said in the press release. “We urge people to renew early and to read about the new driver’s licenses and ID cards before visiting the DMV.”

Michael Smith, the DMV’s director of operations, said that the current licenses have “10 or 12” security features. The updated version will have 23, including microprinting, a raised signature, and features that utilize blacklights.

“Some [features], only our chief investigator knows what they are,” Smith said.

In addition to their enhanced security, the new licenses will make Vermont the 12th U.S. jurisdiction to offer a third gender label. Those who select the “other” option will have an X marked on their license — the character preferred by the LGBTQIA Alliance of Vermont.
Gustavo Mercado Muñiz, the Transgender Program Coordinator at the Pride Center of Vermont, said they think the X option is a good way of “covering as many people as possible.”

“The first and biggest advantage is we're giving visibility to a lot of community members — myself included, actually — who are nonbinary, or who identify somewhere outside of traditional male-female, masculine-feminine binaries,” Muñiz said.

Because the new licenses will include enhanced safety features, they will be produced in a high-security printing facility instead of at individual DMV branches. The update means that after Vermont drivers go to the DMV for a renewed license, they will wait roughly two more weeks to receive their new ID.

In the time between applying for a license and receiving one, Vermonters will have a 30-day “temporary paper document” to be used for driving purposes only. The temporary document will not function as a form of official identification; if drivers anticipate needing to use a license as ID, Minoli recommends keeping an old license or applying for renewal well in advance.

According to Smith, the out-of-house printing is a choice that the DMV made to help smooth the licensing process. Broken printers account for delays or problems “99.8% of the time,” Smith said, and the current printers are old enough that they are no longer being produced by the manufacturer.

“You take care of the printer, and I just got rid of 99% of my problems,” Smith said.

Smith also expects that though there might be some bumps in the transition period, the updated system should ultimately improve DMV wait times.

The new licenses will be rolled out statewide throughout the month. The process is set to begin on June 11 in Rutland and, per the current schedule, end with St. Johnsbury on June 27. Those who need a renewal during the transition period should check the statewide DMV website. In the interim, applicants will receive whichever version of the license is locally available.

Thanks for reporting an error with the story, "DMV rolls out driver’s licenses with third gender, enhanced securit..."