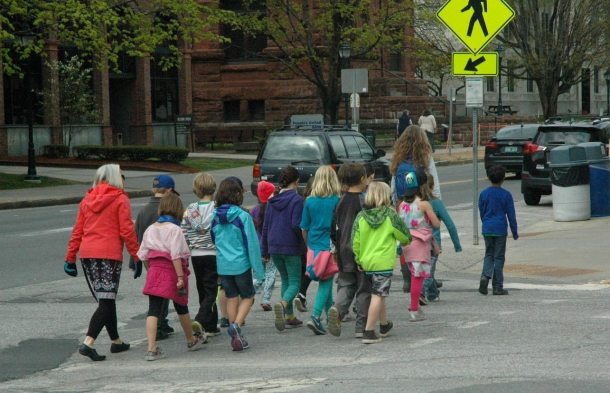 A group of children walk down State Street in Montpelier. File photo by Jasper Craven/VTDigger

Editor’s note: Art Woolf is an associate professor of economics at the University of Vermont. He served for three years as state economist for Gov. Madeleine Kunin beginning in 1988.

[T]his week’s press release from the Centers for Disease Control (CDC) was titled, in typical boring government-speak, “Births: Provisional Data for 2018.” The national media coverage played up the significance of that data, with everyone from the New York Times to NPR to CNN to The Wall Street Journal noting that the number of births in 2018 was the lowest in 32 years. Perhaps an appropriate title for this column is “United States: You Haven’t Seen Anything Like Vermont.”

If the national media thought the new numbers were interesting, they should have looked at the number of “provisional births” in Vermont. The number of births in the nation may be at a 32-year low, but Vermont’s 5,431 births was at a 161-year low.

The Wall Street Journal noted that the 2% decline in 2018 was the fourth year in a row of declining births and births have fallen for 10 of the last 11 years. Vermont can top that. Births here fell 4% — twice as much as the nation — and have only risen in seven of the past 27 years.

The number of births nationally peaked in 2007, when there were more babies born than at the peak of the Baby Boom. That wasn’t the case in Vermont. We did not see any peak in the early 2000s. Our recent peak year of births was in 1989, and even that was less than in 1959, when more Vermont Baby Boomers were born than in any other year. 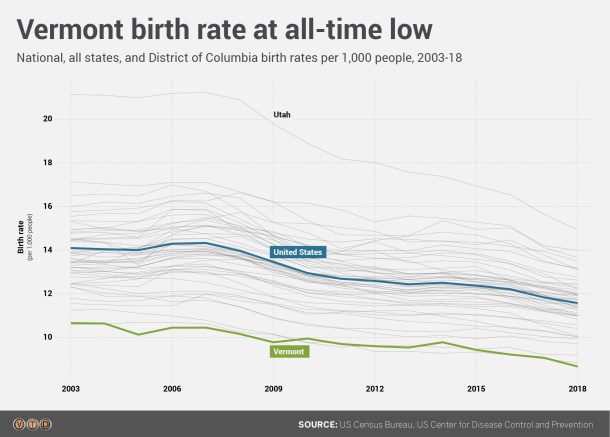 Some of the reasons given for this continued decline in U.S. births apply to Vermont, but others don’t.

Some analysts thought the decline in births during the Great Recession was a reflection of those bad economic times and are puzzled that the decline hasn’t reversed. Others claim the falling number of births is an indicator of people’s despair at an economy that isn’t performing well for young people and a reflection of political uncertainty and gloom about the future. That’s very hard to prove.

Other reasons are easier to see. High birth rates among the 17% of the U.S. population that is Hispanic helped boost the number of births in the past. But birth rates for Hispanic mothers have plummeted in the past 20 years, removing that source of growth. That helps to explain falling births and birth rates in the U.S., but not for Vermont. Only 2% of Vermont’s population is Hispanic, so that can’t be a factor in Vermont’s birth decline.

More highly educated women have fewer babies over their lifetimes. Babies are expensive, and not just because of the cost of diapers. Someone has to stay home to take care of young children, and it’s usually the mom. That means an interrupted career path for college-educated women and lower lifetime earnings, two major opportunity costs of having children. Even if both parents work, day care is expensive and college costs loom high as a future expense. Vermont has one of the highest percentages of adult females with college degrees, so all of these reasons help to explain the low number of births in Vermont and the U.S.

Whatever the reasons, the nation as a whole is looking a lot like other rich nations in Europe, Japan, and elsewhere, with a declining number of births and the average woman having fewer than two babies over her lifetime. Vermont has been there for a while and is leading the nation down that path.

If national observers are interested in seeing how a big decline in births, and low levels of fertility, affect an economy, they should come to Vermont. Who knows, visits by journalists and demographers could be a new growth industry for the state.

Thanks for reporting an error with the story, "Woolf: When it comes to birth rate, everyone has Vermont beat"