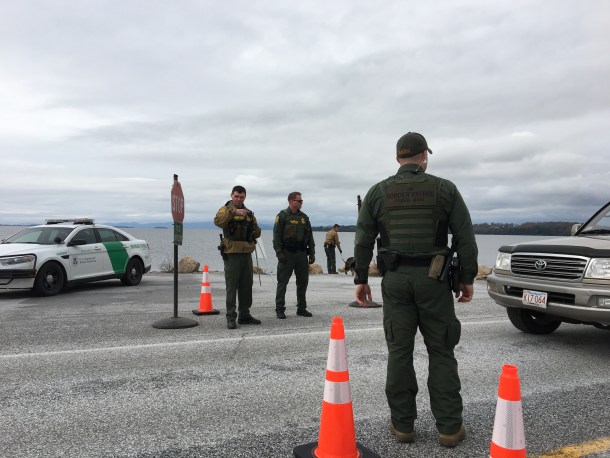 Border Patrol agents set up a checkpoint on the causeway connecting Milton and South Hero. Photo courtesy of ACLU-VT

A weekend Border Patrol checkpoint on the causeway leading from the Lake Champlain Islands to the mainland resulted in no arrests or property seizures, but it did rankle some motorists and civil liberties activists.

Customs and Border Protection defended the Saturday morning operation as a “vital tool” for national security enforcement that can also disrupt smuggling operations. However, the American Civil Liberties Union of Vermont had a different take on the episode.

“People when they are going about their business don’t expect and don’t want to be stopped, delayed, questioned, all in the absence of any suspicion that they’re doing anything wrong whatsoever,” ACLU-VT staff attorney Lia Ernst said Sunday. “This is antithetical to the idea of a free and open democracy.”

The checkpoint, a rare occurrence in Vermont, was set up along the narrow strip of road connecting South Hero to Milton. The causeway is bounded by water on both sides.

Border Patrol has set up checkpoints along roads in other parts of New England, but this is the first ACLU-VT is aware of in Vermont in recent years.

Last year, federal agents checked passengers’ citizenship as they boarded a bus in Burlington, and on an Amtrak train in White River Junction. Highway checkpoints have also been carried out in the past.

In a statement Saturday, Customs and Border Protection said: “The United States Border Patrol (USBP) carefully selects checkpoint locations along routes of egress from the immediate border area to maximize border enforcement while minimizing effects on the traveling public. At the checkpoint, Border Patrol agents ask questions and use their training and experience to quickly determine a traveler’s citizenship or immigration status.”

Border Patrol says it has seen an increase in illegal activity along the Canadian border recently. CBP spokesperson Michael McCarthy said last week that the number of people apprehended along the border so far this fiscal year is roughly twice as many has had been arrested at the same point last year.

However, Ernst said that the lack of any arrests or seizures from checkpoint is illustrative.

“It shows that it was a colossal waste of time, that people were subjected to uncomfortable and intrusive stops for no reason whatsoever,” Ernst said.

“While these checkpoints will cause needless delays for travelers and hinder commerce between Vermont and Canada, we are not convinced that they will make Vermont or the United States any safer,” the three lawmakers wrote.

Under the current 100-mile zone policy, which includes the country’s ocean boundaries, roughly two-thirds of the U.S. population lives within the area where border authorities have enhanced authority.

While Border Patrol has authority to set up checkpoints miles from the border, members of the public who are stopped are not required to answer the questions they ask, according to Ernst. They also do not need to consent to a search of their car. Officers must have probable cause or a warrant to conduct a search without permission.

Ernst said that ACLU-VT has been getting inquiries from people related to border security, particularly when they are going to be traveling across the border.

“The fact that people — for example green card holders — who shouldn’t have any cause for alarm are feeling so scared that they have to call us in advance of their journey just tells me a whole lot about what the rhetoric and actions of this government and this administration are doing for people’s state of mind,” she said.

Thanks for reporting an error with the story, "Border Patrol sandbar checkpoint rankles civil liberties advocates"