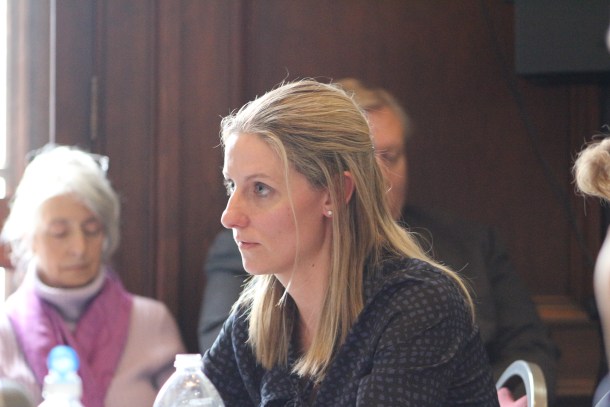 Though independent ambulatory surgery centers are commonplace in other states, this facility will be Vermont’s second — the other is the Vermont Eye Surgery Center in South Burlington, which gained state approval in 2007.

Last year, lawmakers proposed that independent surgery centers be regulated. Vermont was one of only two states in the country without regulations on such facilities. After a long and complicated legislative fight, lawmakers this year reached a a compromise on regulations.

Friday morning, just before the ribbon cutting, the Senate passed S.73, which details the regulatory specifics.

Amy Cooper, manager of the new center, was on a workgroup that collaborated with the Legislature on the bill.

“We reviewed the licensing statutes in other states, we reviewed related statutes here in Vermont, and I think all parties were pretty satisfied that that is going to be a fair and productive licensing bill,” Cooper said. “I certainly feel that way about it.”

A proposal on regulations last year drew quick opposition because of a proposed 6 percent provider tax on surgical center revenues. This year’s legislation does not include the tax.

Though construction is complete, surgeries at the facility on Hercules Drive in Colchester won’t start until this summer. The facility needs to be Medicare certified, a process that typically takes several months.

Once it is up and running, Green Mountain Surgery Center will initially focus on gastrointestinal procedures, including colonoscopies.

The legislation says independent surgical centers should operate in accordance with rules developed by the Health Department, which could deny, suspend or revoke a license if a center substantially fails to comply. Also in the legislation is a provision that independent centers should have a medical director that is a licensed physician, and nurses that are directed by a state licensed registered nurse.

UVM Medical Center, the state’s largest hospital, lobbied against the formation of independent surgical centers. Hospital lobbying groups have said there is no clear need for the centers and that they could drive up the overall cost of health care in Vermont. The health care industry in Vermont spends more than any other group on lobbying. In a special report, VTDigger found that between 2011 and 2018 total expenditures were $12.9 million.

Attorney General TJ Donovan and Gov. Phil Scott, who both attended the press event, said the surgery center is an important option for patients.

“Access to affordable health care is a consumer protection issue. Period,” Donovan said. “Any time we give consumers a choice, in any industry, is a good thing. Health care should be no different.”

Scott said competition in the health care industry is important to the state’s fiscal health.

“We’re losing workers from our workforce every day, and our population ages at the same time,” Scott said. “The answer to addressing these challenges isn’t by raising taxes, it’s by making Vermont more competitive and adding taxpayers. This fits into our workforce development goals by adding high-skilled, high-paying jobs in Colchester.”

The Green Mountain Surgery Center will employ 22 full-time staffers. Surgeons do not count in that number, as they are not employed by the center directly.

Last fall, Susan Maclennan, a plastic and reconstructive surgeon who started her career in the Burlington area, moved from western Canada back to Vermont so she could work at the new center.

“I had the recent experience of having operated at both a hospital and an outpatient surgery center in the same community in Alberta, and I can tell you that hospitals and surgery centers can and do co-exist in most communities,” Maclennan said. “You offer high quality, efficient, safety-focused care in the outpatient center while still utilizing the entire level of care that can be provided in a hospital.”

Cooper said the new facility would offer patients an alternative.

Thanks for reporting an error with the story, "Colchester independent surgery center opens after lengthy fight"