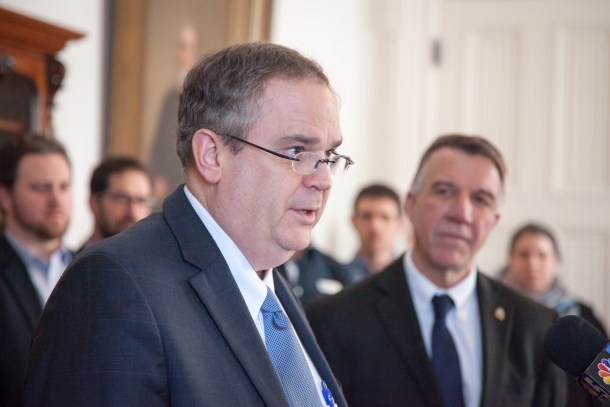 Proficiency-based learning measures academic progress based on the skills students can show they’ve learned, not seat-time in a classroom. The mandate has transformed the way educators teach as well as the report cards and transcripts students take home. But the shift has been controversial in many communities, and, absent strong guidance from the state, implementation has varied wildly across districts.

Earlier this month, Vermont National Education Association president Don Tinney told lawmakers rollout of the initiative had been replete with “snafus” and asked them to consider postponing until 2022.

The 2020 deadline isn’t in Vermont statute. Instead, it comes from the state’s Education Quality Standards, which were adopted by the State Board of Education and last revised in 2013.

At a board meeting on Wednesday, State Board chair Krista Huling brought up the debate about postponing with her peers, noting that the only apparent consequence of failing to meet the deadline would be that state officials would recommend ways for schools to make the switch successfully in the district’s “continuous improvement plan.”

“So at what point would it be punitive, and do we really need to go through and make a policy about delaying for two years?” she asked.

Secretary of Education Dan French didn’t go as far as to tell the board that it shouldn’t change the date. But he told them the Agency of Education certainly wasn’t approaching the 2020 deadline as a do-or-die mandate.

“From our standpoint, we portray districts being on a journey, just like everyone in the world is on a journey, and we don’t see 2020 as some sort of hard and fast date,” French said.

House Education Committee chair Kate Webb, D-Shelburne, said that while moving to a proficiency-based system remains a “legal requirement,” the state doesn’t have a “proficiency jail.”

“There isn’t any defined consequence for those that don’t meet those standards,” she said.

And while the committee could introduce legislation to postpone the State Board’s deadline, Webb suggested lawmakers’ time may be better spent talking about how to help those districts struggling to implement the new system.

Meanwhile, it remains unclear what it means, exactly, to confer a “proficiency-based” high school diploma. Many of the changes schools are making – switching from traditional letter-grading to a 1-4 scale, for example – aren’t themselves required by the State Board’s rules.

Huling said in an interview that state officials would probably look to local districts for ideas about how to give all schools guidance on how to meet the state’s proficiency standard.

“So I think the first part of that conversation is ‘what is being done?’ And when looking at that, ‘What is the best that is happening around the state?’ And what do we want to highlight and push-out to districts that are struggling?’” she said.

Thanks for reporting an error with the story, "Education secretary says proficiency deadline not ‘hard-and-fas..."

In Williston, an emergency worker shortage is undermining the 911 system