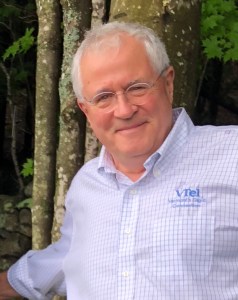 [A] dispute between two phone carriers based on equipment made by the Chinese company Huawei Technologies has landed before Vermont regulators.

FirstLight, the Albany telecommunications company that acquired Vermont’s Sovernet in 2017, is seeking to connect with the network of Vermont Telephone Co. Inc., or VTel, the private Springfield-based company that provides landline service to 14 Vermont villages and 4G LTE wireless internet to many areas of the state.

Under the federal Telecommunications Act, carriers like VTel are required to let competitors interconnect in order to share traffic. FirstLight is seeking portability for phone numbers that it requires in order to serve customers in VTel’s territory.

But VTel is refusing, saying it needs assurance first that FirstLight isn’t using any equipment made by Huawei, one of two Chinese companies that have come under scrutiny lately by national security agencies as possible security threats.

“The U.S. government says I need to be very cautious and therefore I won’t interconnect to Sovernet and FirstLight unless you force me to,” said Michel Guité, VTel’s president. “And even if you force me to, I might refuse.”

Huawei is the second-largest smartphone maker in the world, according to Fast Company, which said officials from the CIA, NSA, FBI and Defense Intelligence Agency have testified in Congress that Huawei and the Chinese company ZTE pose a security threat. Meng Wanzhou, the Huawei CFO and the daughter of the company’s founder, was arrested in Canada over claims a company she is connected with has ignored sanctions against Iran. The U.S. is seeking her extradition.

The $716 billion federal defense policy bill signed into law in August includes some controls on U.S. government contracts with ZTE Corp. and Huawei, according to Reuters. Australia and New Zealand won’t allow Huawei to build its 5G networks there because of security concerns.

Guité said he’s not sure spying is happening, but he can’t be sure it’s not.

“The nightmare scenario is if someone could infiltrate our computer, they could infiltrate someone else” connected to VTel’s fiber network, such as Green Mountain Power or VELCO, said Guité. “The idea is to use a smaller enterprise as a back door. I don’t want to be that smaller company causing harm to one of those people who give us the opportunity to serve them.

“It’s not a frivolous worry,” Guité added. “I don’t know how a connection to a network heavily powered by Huawei might do that to us, but there are 70,000 engineers smarter than me figuring out how to infiltrate.”

He said he’s also worried that having Huawei equipment in his network might jeopardize federal funding from agencies like the Federal Communications Commission in the future. The Vermont Public Utility Commission is looking into whether that could happen, said commission attorney Dan Burke.

FirstLight didn’t return a call with questions about whether they use Huawei equipment. VTel is calling for the agreement to include the stipulation that FirstLight not use equipment made by Huawei; FirstLight has responded to the PUC that it will refuse that stipulation, said Burke.

FirstLight requires the interconnectivity in order to take on service to a VTel customer and to use that customer’s existing phone number, according to the PUC.

But Guité said his resistance to the interconnectivity agreement was not based on competition.

“Cybersecurity is the concern,” he said.

Thanks for reporting an error with the story, "Vermont phone carriers in dispute over concerns about Chinese firm Hu..."