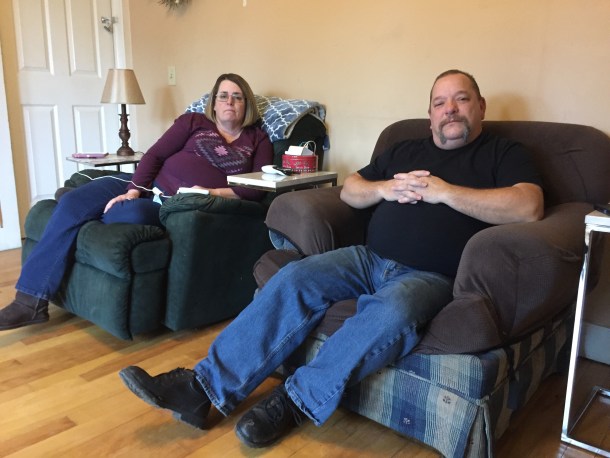 Janet and David Aubut at their home in Barre on Dec. 24. Photo by Anne Wallace Allen/VTDigger

“It had incredible benefits; it was a job you could stay at and retire at, that type of job,” said Aubut, 53, of Barre. He said that the company told him they wanted to hire him, and asked him to go through pre-employment background test and drug screening after he was interviewed in mid-November.

The company, which is owned by Land O’Lakes in Minnesota, has a zero tolerance policy for drug use, but Aubut, a former business owner, said he didn’t worry about passing because he doesn’t use any drugs.

“I had no reason to know there was a problem,” he said.

But Aubut failed the drug test, he said because of the CBD lotion he had been using for months on his swollen knee. The job offer was rescinded. Vermont Creamery neither confirmed nor denied that Aubut had been offered a job.

“We have a drug free workplace policy and with respect to offers of employment, such offers are conditional upon the candidate successfully passing a drug test,” said Kara Young, community and outreach coordinator for Vermont Creamery.

THC is the psychoactive compound in marijuana. CBD, or cannabidiol, a derivative of the hemp plant, is marketed as a health-giving compound that is THC-free, or nearly so. But CBD products can contain trace amounts of THC, and Aubut is not the first person to fail a drug test because he was using CBD to treat a health problem.

Nearly identical experiences were reported by a woman in Atlanta and a man in Missouri in recent months. But that risk is not on the label of most CBD products, and there is no way for users to know for sure what’s in the ointment or oil they purchased. 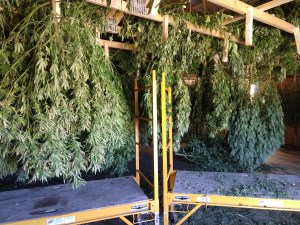 Hemp dries in the greenhouse at Green Mountain CBD in Hardwick. Photo by Jon Kalish

Bridget Conry, director of product development for Champlain Valley Dispensary/Southern Vermont Wellness, the largest medical marijuana and CBD dispensary in the state, said her company would like to see a third-party lab established in Vermont to test and verify all CBD products.

Her company tests its products, as do several other Vermont companies that make CBD oils and lotions. But while the Agency of Agriculture has said it views Vermont hemp and CBD as an important niche marketing opportunity, the state has no objective authority to ensure quality control.

“It’s important to say to people buying products that if they are going to consume a product on a regular basis that has up to .3 percent THC in it, there will always be that risk they will fail a test,” Conry said. “That is important to know up front.”

Based on the passage of the 2018 farm bill, the FDA in December issued some guidelines Dec. 20 saying it will regulate hemp derivatives, defined as having less than .3 percent concentrations of THC. But the federal government isn’t yet testing CBD products for THC or any other substance.

Aubut bought his CBD product at a mall kiosk. It came from Green Mountain CBD in Hardwick. He told the woman who sold him the product that he had failed a drug test after using it, “and she was floored,” he said. “She said it’s not supposed to have any THC in it. Apparently they’re allowed to have up to .3 percent, which wasn’t even stated on the bottle either.”

Green Mountain CBD said its plant extract does contain a trace amount of THC, “well below the established limits for any hemp products.”

“We are not authorities on drug testing, so we can only advise that people who are subject to screening to err on the side of caution,” the company said in a reply to emailed questions, adding that lab analysis of its CBD oil could be found on its website.

Aubut, who used to own a basement waterproofing company, said neither he nor his wife use marijuana.

“We are clean, professional adults,” he said. Of the company that nearly hired him, “In fact, one of the secretaries agreed with me,” he said. “She said, ‘My grandfather takes this stuff and it helps him with all kinds of ailments.’”

But the sympathy didn’t extend to the legal department, which “wouldn’t allow me to be considered,” Aubut said. Land O’ Lakes did not return calls seeking comment about its hiring policies.

Aubut has asked the Vermont Agency of Agriculture to test the CBD product he used. He has also since found another job. He stopped taking the CBD oil about a month before he took a drug test for that position.

“I think the state jumped into this to get taxes on the oils or whatnot without thinking it through or having safeguards in place for people like us who don’t do drugs,” he said.

The state is now writing rules that will include definitions for hemp-derived products, said Cary Giguere, director of public health in the Agency of Agriculture’s Agricultural Resource Management Division. He added that the agency has been behind schedule on its lab testing for many agricultural products since its lab was damaged in Hurricane Irene in 2011. It tests hemp flowers for THC, but not the products that are sold as oils or lotions.

“We’re just making a taxonomic determination that the crop being grown is hemp,” Giguere said. The rules under construction this week, he added, are “the beginning of setting a standard for developing a Vermont brand.”

Thanks for reporting an error with the story, "Buyers beware: Barre man says CBD products cost him a job"