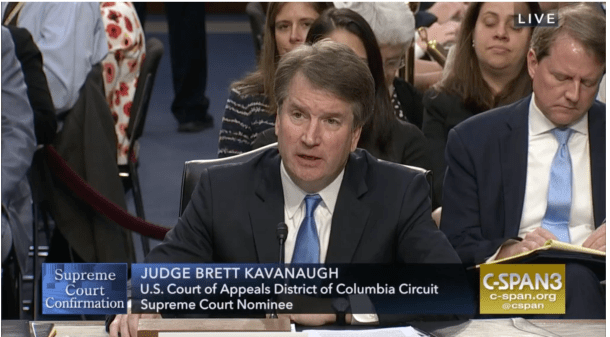 Vermont’s senior senator accused the judge of being aware of emails stolen from Leahy and other Democrats from 2001 to 2003 and having knowledge of the warrantless surveillance of United States citizens that went into effect in the aftermath of Sept. 11, 2001.

The majority of Leahy’s half hour of questioning was spent asking about correspondence between Kavanaugh and Manuel Miranda, the former Republican staff member responsible for promulgating the stolen information during Kavanaugh’s time as a lawyer for the White House under President George W. Bush.

In Kavanaugh’s 2004 and 2006 confirmation hearings for federal court posts, he told senators he did not know about the infiltration of Senate Democrats’ files regarding judicial nomination fights, and that he had not suspected that any information he had seen was stolen.

But Leahy said that based on emails given to the Senate Judiciary Committee before the hearing, there is new evidence that Kavanaugh was aware of the stolen information. Leahy suggested that Kavanaugh might have lied in those previous confirmation hearings.

“I am concerned because there is evidence that Mr. Miranda provided you with materials that were stolen from me and that would contradict your prior testimony,” Leahy said. “It’s also clear from the public emails that you had reason to believe materials were obtained inappropriately at the time.”

THREAD: Between 2001 and 2003, Republican Senate staffers hacked into and stole 4,670 files on controversial Bush judicial nominees from 6 Democrats, including me. This scandal amounted to a digital Watergate, not unlike Russia’s hacking of the DNC.

Kavanaugh repeatedly stated he had not been aware that any documents or information he had received from Miranda had been stolen and that the information shared with him had never seemed out of the ordinary for what was discussed among White House counsel staff.

“It’s very common when you are in judicial selection process to determine what are all the senators interested in for an upcoming nominee or an upcoming hearing. That is the coin of the realm,” Kavanaugh said, “that’s a very common kind of discussion.”

Leahy continued his line of questioning, referring to an email between Miranda and Kavanaugh from 2003 in which Miranda forwarded a draft letter from Leahy and other judiciary Democrats to then Majority Leader Sen. Tom Daschle, D-S.D., before it was made public.

“But here’s the thing, you had the full text of my letter in your inbox before anything had been said about it publicly. Did you find it at all unusual to be receiving a draft letter from Democratic senators to each other before any mention of it was made public?” Leahy asked Kavanaugh.

Kavanaugh said that all he had written back in the email was “who signed this?” — evidence, he said, that he believed the letter had been made public by the time it was in his possession.

In Kavanaugh’s confirmation hearing for D.C. circuit judge 2004, he was asked by Sen. Chuck Schumer, D-N.Y., if he had ever “come across memos from internal files of any Democratic members given to you or provided to you in any way” to which Kavanaugh responded that he had not.

Leahy said that the Senate Judiciary had other documents that provide even more proof that the nominee misled senators about internal Democratic documents he received, but those records are currently “committee confidential,” meaning they can only be viewed by members.

Speaking to committee chairman Sen. Chuck Grassley, R-Iowa, Leahy said, “There are at least six documents that you consider ‘committee confidential’ that are directly related to this. Just like the three documents I shared that were already public, these other six contain no personal information, no presidential records, restrictive material. There is simply no reason they can’t be made public, I hope they will be before this next round.”

At 2:30 p.m., Leahy released a statement saying that Grassley had “assured” him that those six documents not made public for Wednesday’s proceedings would be available for Thursday’s questioning of Kavanaugh.

Leahy also touched on another major Democratic concern about the next Supreme Court justice: how they view presidential immunity.

“Does the president have the ability to pardon somebody in exchange for the promise from that person that they wouldn’t testify against them,” Leahy asked Kavanaugh.

“Senator, I’m not going to answer hypothetical questions of that sort,” the judge responded.

Leahy spent his remaining time asking Kavanaugh about his knowledge at the time of the warrantless wiretapping of U.S. citizens during the Bush administration’s “War on Terror” following the Sept. 11, 2001, attacks on the Pentagon and World Trade Center.

Kavanaugh said that he had not been been aware of the program until it was reported by the New York Times and said that he could not recall if he had ever raised questions about the constitutionality of such a program.

The third day of the confirmation hearing continues Thursday at 9:30 a.m.

Thanks for reporting an error with the story, "Leahy presses Kavanaugh over emails stolen by Republican operative"

Having trouble paying your utility bills due to Covid-related economic hardship?

T. Elijah Hawkes: A call to the ‘able-bodied’