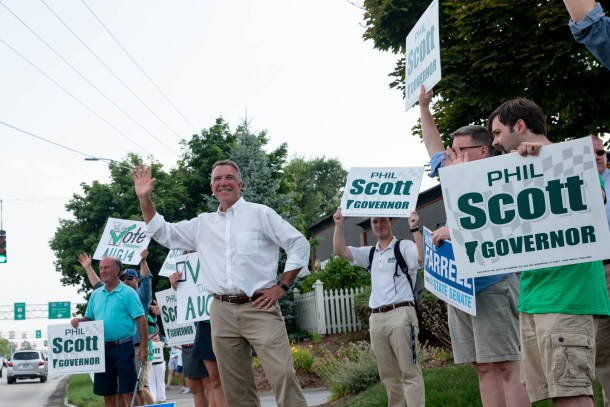 The Republican Governors’ Association is ready for battle in Vermont a week out from the state’s primaries, having poured more than $1 million into a political action committee backing Gov. Phil Scott.

The PAC, “A Stronger Vermont,” has already spent $216,000 on a mix of TV, print, and Facebook ads, all in the past two weeks. The latest filings with the secretary of state show it still has more than $850,000 left in its war-chest.

The RGA, a Washington, D.C.-based organization that works to elect Republican gubernatorial candidates, dumped more than $855,000 of its $1.08 million in contributions into Stronger Vermont coffers this week.

RGA’s donors include the Koch brothers, Blue Cross Blue Shield, AT&T and Pfizer. Scott is alone among the gubernatorial candidates in receiving corporate dollars or PAC support. His campaign has received direct support from the likes of Monsanto and Eli Lilly.

The RGA spent nearly $3 million to elect Scott to his first term in 2016, also through A Stronger Vermont. But it didn’t start spending on Scott until after the primary that year, filings show.

The RGA declined to answer questions about why it had poured so much money into the race, and why it had ramped up its financial support and media buys for the incumbent governor so soon in the election cycle.

“I’m not able to comment on why/when/what we will do, since that is a part of our strategy,” Jon Thompson, the RGA’s communications director, said in an email on Wednesday.

“I am able to say that we want to help share the story with Vermont voters of how Governor Scott is providing strong leadership and delivering results for the people of Vermont,” he said.

Brittney Wilson, Scott’s campaign manager, declined to speculate about why the RGA had dumped so much money into the race before the Republican primary.

“You’d have to ask the RGA about their strategy or what they think,” she said.

Like Scott’s campaign, the RGA’s ads have homed in on a message of economic growth and fighting taxes. Campaigns are legally barred from soliciting PAC money or coordinating with them to determine how it is spent.

Although the PAC now has close to a million dollars at its disposal, Eric Davis, a professor emeritus of political science at Middlebury College, thinks the RGA will save most of the money to bankroll political advertisements after the primary — in September and October when the general election campaign heats up. 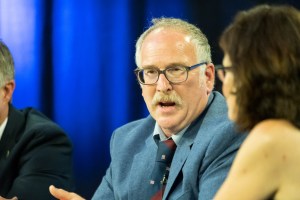 Davis said he assumes the RGA commissioned a poll asking how Scott would fair in a head-to-head match up against his sole primary challenger, Keith Stern, a grocer from Springfield who has never been elected to public office. The poll, he said, may have raised questions about how broad Scott’s support is among the conservative electorate.

Davis doesn’t think Scott runs the risk of losing the primary, but he noted that anything less than an overwhelming win over Stern could weaken the incumbent heading into the general election.

“I think both the RGA and the Scott campaign are concerned that [Stern’s] going to do better than expected,” Davis said.

Independently, Scott’s campaign had raised $214,000 as of July 15, the last filing deadline.

The four Democratic candidates in the primary have together raised a combined total of $200,000, according to the mid-July filings with the secretary of state’s office.

Christine Hallquist, who leads the pack, had received about $132,000 in contributions, though she pledged to return $16,000 she had accepted in corporate donations earlier this week.

Since the filing deadline, their total fundraising has approached $170,000, according to Cameron Russell, Hallquist’s campaign manager.

While Russell said the campaign wouldn’t denounce money from Democratic PACs, he stressed Hallquist is focused on raising money from individual donors.

“We are not chasing PAC money, that’s not where our head’s at,” he said. “As of the last filing, we had more donors than Phil Scott did across Vermont and we hope those numbers are only going to come up.”

The next campaign filing deadline is Aug. 15, the day after the primaries.

Thanks for reporting an error with the story, "Contributions to Pro-Scott PAC top $1 million"