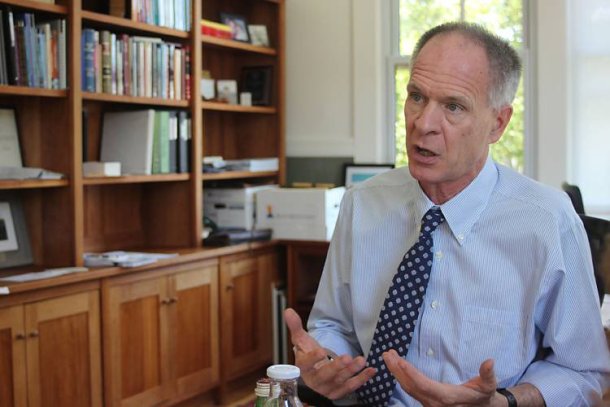 Thomas McHenry, Vermont Law School's dean and president, in his office in Debevoise Hall at the school in South Royalton. File photo by Charles Hatcher/Valley News

[F]ourteen out of 19 members of the Vermont Law School faculty lost tenure on July 1 as part of a restructuring effort at the South Royalton institution.

Faculty who lose tenure will no longer enjoy certain protections that ensure employment.

Professors interviewed by VTDigger are concerned that the 75 percent reduction in tenured faculty will damage the school’s reputation as one of the nation’s top-ranked environmental law schools.

The Vermont Law School has had an ongoing budget deficit of more than $1 million over the past several years and the administration has said the revocation of tenure is part of a plan to develop a “sustainable financial model.”

President Tom McHenry, who did not respond to repeated requests for an interview for this story, said in June that he is “looking for every efficiency we can find.”

Professors said they were informed of the decision to revoke tenure in a private meeting with McHenry and Academic Dean Sean Nolan. Faculty members were told they could choose to continue teaching another year under a new contract or they could opt for six month contracts with varying teaching requirements and salaries, or they could leave.

Tenured faculty were required to sign a non-disclosure and non-disparagement agreement, prohibiting them from speaking to anyone except their spouses. The agreement prohibited faculty from making derogatory remarks about Vermont Law School and its administration.

The American Association of University Professors, based in Washington, D.C., says the school has “depart(ed) grossly” from standards set by the association.

In a letter to Vermont Law School’s Tenure and Retention Committee last month, Anita Levy, a senior program officer at the American Association of University Professors, said the law school’s decision to revoke tenure is “unacceptable under principles of academic freedom and tenure.”

The Tenure and Retention Committee, which is charged with making tenure recommendations to the administration and is comprised of all 19 tenured faculty, dissolved July 1 when most members of the committee lost tenure in the new fiscal year.

Professor Peter Teachout, chair of the committee, is one of the faculty members who lost tenure. He has taught constitutional law, legal history and trade law for 40 years at the Vermont Law School. Teachout says he plans to continue teaching with a “significant reduction in salary.”

“I think there's a sense that the steps that were taken are lawless,” Teachout said.

Teachout said he was not involved in the decision to eliminate tenure, and in a June 12 letter, Teachout took issue with the administration’s approach. He told President McHenry that “the process of implementation has been the antithesis of transparency.”

Craig Pease, a science and law professor who had tenure for 18 years and earned $110,800 a year, said the agreement was “absurd” for a school that values intellectual freedom and debate. He refused to sign it and was subsequently fired on July 1.

Levy, of the American Association of University Professors, sent a letter on behalf of Pease to McHenry and Colleen Connor, chair of the Vermont Law School board of trustees, on July 13, urging the school to reinstate his employment.

It appears faculty members were coerced into signing the agreement, she wrote. “We find this possibility deeply troubling,” Levy said.

Teachout sent another letter to McHenry days before he and others lost tenure, asking him to reconsider the non-disclosure agreement.

“I know many of my colleagues are really scared to express even responsible criticism for what happened,” Teachout said in an interview. “Tenure ought to provide you with protection against that.”

In an interview last month, McHenry said he believed AAUP policies had been followed.

The decision to roll back tenure has caught the attention of law professors at other schools.

"As someone who has been teaching a long time and values the role that tenure plays in safeguarding the academic enterprise and academic freedom, I find what's happening at VLS to be really disturbing," said Emily Houh, a professor at the University of Cincinnati College of Law.

It is unclear who will have tenure going forward. Teachout said he asked McHenry multiple times through the month of June to tell him who has tenure. McHenry didn’t respond, Teachout said.

Mihaly resigned last May, effective June 30, 2018, he said, but he has agreed to teach a course as an adjunct faculty member next spring. He declined to comment further on the school’s decisions.

Two professors in the administrative office -- Nolan, who is vice dean for faculty, and Stephanie Willbanks, the first woman to be granted tenure at the college in 1986 -- retained tenure, Teachout said.

Another one of the five believed to have retained tenure is McHenry’s friend John Echeverria. In an email, Echeverria said he was out of the country and unavailable for comment.

Financial woes at the top-ranked environmental law school started in 2012 when the number of applications in the Juris Doctor degree program dropped 10 percent, to 899 applications. VLS eliminated two tenured positions in 2013 under Mihaly.

McHenry became president on July 1, 2017. That same year, VLS received a 40-year $17 million U.S. Department of Agriculture loan, which came with a 2.25 percent interest rate. In the loan application, obtained by VTDigger, Mihaly spoke of the law school’s importance to the rural community, calling it the area’s largest employer and highlighting the South Royalton Legal Clinic, which provides $3.5 million in pro bono legal services.

Teachout said faculty were aware of the law school’s financial challenges and were willing to take salary cuts to keep the school going.

“The dean did a really good job of keeping the faculty informed,” Teachout said.

However, Teachout and others took issue with how the decisions were made and implemented.

“At that point the administration stopped communicating and went in the dark,” Teachout said.

Teachout acknowledged that he could be jeopardizing his position by speaking negatively about the administration under the contract he signed.

“I feel a deep responsibility to the school, to my colleagues and to the institution of tenure itself,” said Teachout in his June 12 letter to McHenry.

Applications and enrollment have increased slightly since 2012 despite the financial challenges. McHenry expected 180 incoming students next year in the JD program, up from 161 this past year and 139 the year before. Total enrollment at Vermont Law School this past year was 604 students.

In a previous statement on the tenure positions at the law school, Connor said the board was working with the administration to design a sustainable model for the future.

“As difficult as the process is, we feel confident that in the end, Vermont Law School will be a stronger, more vibrant institution that is sustainable in the long term and that continues to meet our mission of an exceptional legal education,” Connor said in a statement June 21. 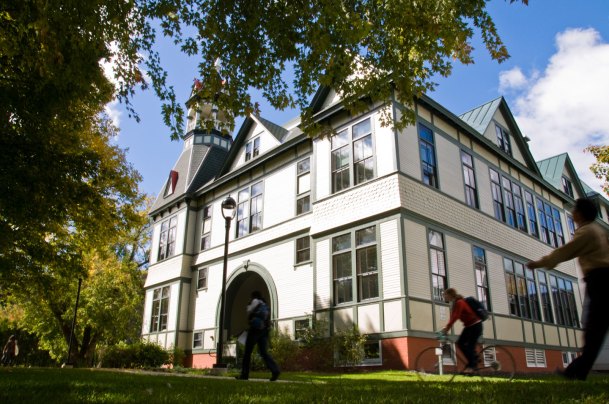 Correction: An earlier version of this story included a reference to a financial report, which has since been removed because it was not relevant to consideration of a loan the school had sought. Also, the story referred incorrectly to a national faculty organization. It is the American Association of University Professors.

Thanks for reporting an error with the story, "Vermont Law School revokes tenure for 75 percent of faculty"