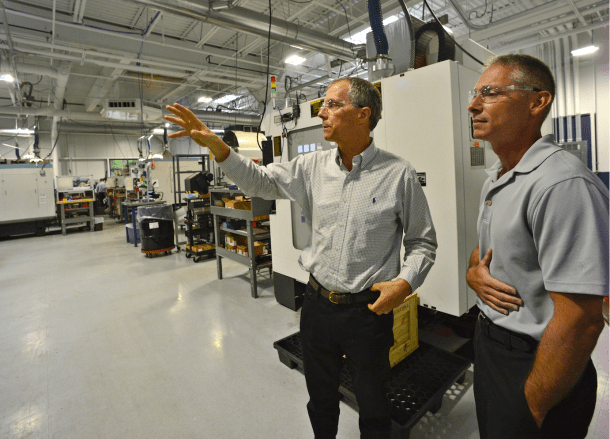 Some Vermonters cheered on social media this week after CNBC put out a list placing the Green Mountain State at the top of its quality of life ranking. But for those trying to business in the state, the picture isn’t so rosy.

In a survey looking at the best states to do business in, CNBC ranked Vermont 32nd in the country. In a separate poll compiled by WalletHub, Vermont came in fourth to last.

Though Vermont fared better in the CNBC survey, there was one area of strong agreement between the two: it’s a tough place to get employees and financing.

The CNBC survey ranked Vermont 46th on indicators related to its workforce and 49th on access to capital. The WalletHub survey placed the state second to last on the “access to resources” category, which includes human capital, financing, working-age population and education levels.

“We have a small population,” said Ashley Moore, director of Main Street Alliance, “which can make it really challenging to find workers at times and also to sustain a robust customer base and those are certainly challenges that small business owners can face in a small state.”

Although business have started to adapt, the struggle to secure capital has been a constant for entrepreneurs in the decade since Randy George, owner of Red Hen Bakery, started his business in Vermont, he said.

“Getting financing is tough,” said George. “You’ve seen now in the last 10 years or so a lot more businesses doing crowdsourced things or community supported models.”

Michael Schirling, secretary of the Agency of Commerce and Community Development, said the administration is working to make Vermont more accommodating to both business owners and those who might work for them.

“All of the decisions that are being made are made through the lens of ‘does it contribute to economic development and growth? Does it create affordability or the antithesis of that, does it harm affordability? And does it protect the most vulnerable?’” he said.

The agency has prioritized developing the workforce through marketing campaigns, expanding affordable housing, limiting barriers to business and helping communities map out their economic growth strategies.

But the state has its own problems with accessing resources. Last year, Forbes declared the state’s GDP of $31 billion to be the smallest in the country, and ranked it the worst state for economic output and income growth.

Gov. Phil Scott has pledged not to raise any new taxes or fees for state programs, relying instead on “organic” growth to increase state revenue.

The governor has launched the THINKVermont initiative to try to bring more workers and businesses to the state, mostly through online marketing, but the Legislature declined to fund an expansion of the program during the session that ended last month. (The THINKVermont website boasts that Vermont is ranked at the top of the Opportunity Index.)

“We are probably most intently looking at how to train and retrain the existing workforce,” Schirling said of the government’s efforts to reverse workforce trends. “Retain our existing young people, ensure they’re prepared for the careers in the 21st century, they’re able to help scale businesses in a way that is meaningful, that we’re advocating for active efforts to recruit new Vermonters in particular.”

Small businesses (employing less than 49 employees) make up well over 90 percent of enterprises in the state and employ over half of the workforce. Moore of the Main Street Alliance, which advocates for these businesses, said that with everyone agreeing on what needs to be fixed, it’s a good time to start coming up with solutions.

“There’s opportunity for us in Vermont to look at policy strategies for how we can better invest in the workforce and invest in small businesses and level the playing field for them,” said Moore.

Thanks for reporting an error with the story, "Vermont’s workforce woes a drag on national business indexes"

Jock Gill: Affordability is key in building digital capacity for all Vermonters

Dawn Schneiderman: Join us in taking the vaccine pledge

David Roth: Vermont should take the lead and make Election Day a holiday

By Kit Norton and James Finn

There is only one week left in our Spring Drive. VTDigger needs your support to unlock $15,000 from generous donors by the end of the week. Increase your impact by being one of 250 members to help us get this match and we will also send a brand-new book to a Vermont kid.