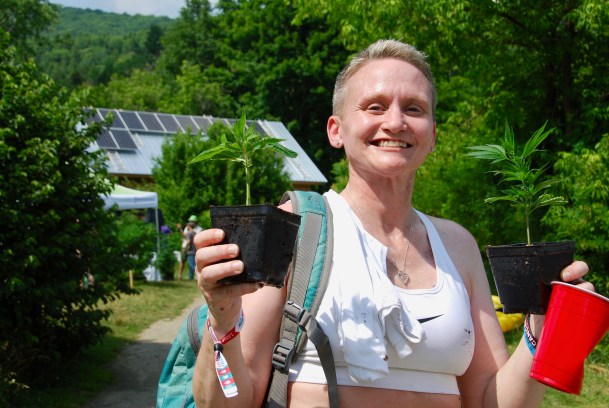 Heather Hubb, who moved to Vermont for the medical marijuana program, with two hemp plants. Photo by Elizabeth Hewitt/VTDigger

[J]OHNSON — Marijuana officially became legal in Vermont on Sunday, and events across the state marked the landmark law.

The largest event was a festival, nicknamed “Weedstock” by one volunteer, held by Heady Vermont in Johnson. About 1,600 people — old Vermonters, middle aged professionals and young Burlington hipsters — gathered at a farm to hang out, listen to live reggae and toke in public.

It was a laid back affair, focused on imbibing and relaxation. A dozen people lounged under one white tent. A couple lay on their backs and passed a joint back and forth. One man practiced yoga. A short distance away, a woman sat alone, cross-legged in the sunshine, smoking from a vape pen and watching a reggae band.

Nearby, a small crowd escaped the scorching sun at a shady bend in a river. One woman wading in the shallows took a hit from a glass pipe and passed it to a friend.

After years of fierce debate and political wrangling over the issue in Montpelier, marijuana legalization took effect Sunday with little controversy.

State policymakers passed a legalization measure early this year, allowing adult possession of up to an ounce of marijuana and up to two mature marijuana plants per household. The law does not set up a tax and regulate system, or allow for any sales. Gov. Phil Scott signed the bill into law in January.

Eli Harrington, a co-founder of Heady Vermont who helped organize the event, said the organization wanted to celebrate the day marijuana became legal in Vermont.

“It’s not celebrating getting high,” he said. What we’re celebrating is that this social change has happened.”

For the most part, he said, it was “a lot of people just hanging out, kind of sharing their prohibition war stories.”

“It’s not like we’re reinventing the wheel here with having people get together, listen to music, and consume cannabis. It’s not the most original thing,” Harrington said. “Society’s circumstances just happen to be changing at this time, that’s what makes it historic.” 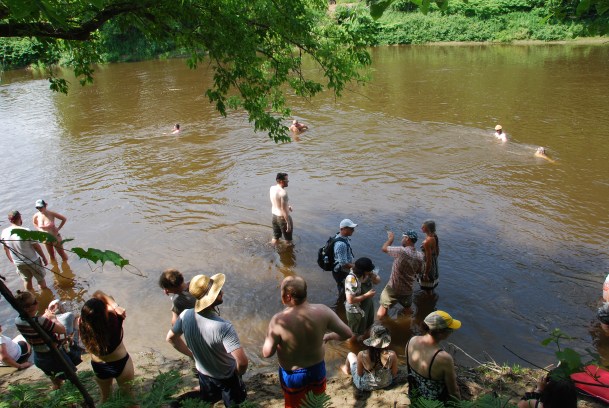 Festival goers take a break from the heat in a river. Photo by Elizabeth Hewitt/VTDigger

The event was on private property, a permaculture farm that had previously hosted a reggae festival. The state law prohibits consumption in public areas.

Attendees could not exchange money for marijuana or have more than the legal limit of one ounce per person, according to Harrington — in compliance with the law that took effect today.

Lamoille County Sheriff Roger Marcoux checked in with Harrington and other organizers.

Marcoux, who was opposed to legalization during the legislative debate, said times have changed.

“It’s here now, so any prejudices that we’ve had in the past or whatever, this is the law,” he said. “We have to adjust our thinking that was pretty traditional.”

Marcoux and organizers have worked closely together, monitoring traffic levels and ensuring safe access. The sheriff’s office and the Vermont State Police were stepping up patrols for impaired driving. But he did not anticipate any issues with the event.

With the change in the law, his office hasn’t made any immediate changes to protocols, but there will be training for officers in the near future.

“For me I’ve been in this job for 38 years in various capacities,” Marcoux said. “This is a new culture change. It’s completely different now.” 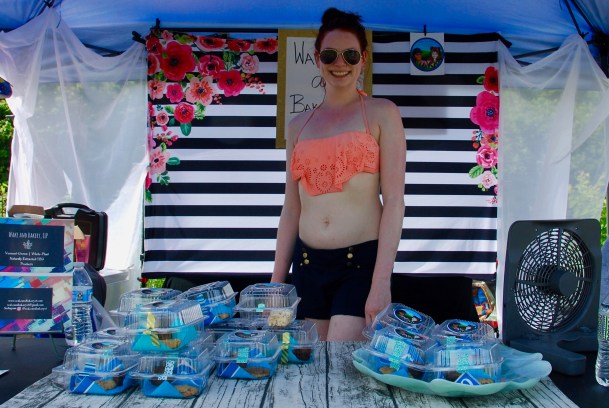 Lisa Nyhagen with an assortment of edible marijuana products Wake and Bakery was giving to people who purchased a raffle ticket. Photo by Elizabeth Hewitt/VTDigger

At the festival, dozens of vendors visited with guests in the shade of their tents, selling pipes, food, or products infused with a non-psychoactive chemical from hemp.

The edibles, containing the psychoactive chemical in marijuana tetrahydrocannabinol, or THC, are not legal to sell — nor is any recreational marijuana under Vermont’s current law. The stand offered the boxes as gifts to people who purchased a $20 ticket in a raffle to win custom blown-glass paraphernalia.

Nyhagen and a partner launched the business, Wake and Bakery, late last year as a focused in hemp-based products. They also were selling a range of their CBD-infused wares, including honey and cooking oil.

Nyhagen does not expect the edibles giveaway will be a regular occurrence under the state’s current law. But she said they are open to a loosening of laws around marijuana edibles down the line.

“This is a special occasion as of now to celebrate,” Nyhagen said. “So you know we’re kind of sticking strong that we’re a CBD business, and we’re open-minded to what can happen in the future.”

The event attracted a wide range of businesses. A home security company had a demonstration up showing how the system could protect plants. The festival also featured tutorials, including a cultivation workshop.

Heather Hubb, a leukemia patient who moved to Vermont from South Carolina because of the medical marijuana program, bought two hemp plants from the nursery to bring home and cultivate. She’s recently started growing at home.

“I think it’s great that they legalized marijuana and it’s for a good cause,” Hubb said.

Scot Richards, a Calais resident who attended the festival, said he would like to see Vermont move toward a system that allows sales.

“This is a good day, but this bill is only a foot in the door type thing,” Richards said.

Richards said he believes legalization opens the opportunity for more people to look to marijuana for health treatment, not to see it as a gateway drug. He said he agreed with former Republican House Speaker John Boehner, who recently reversed his position to become a proponent of legalizing marijuana because it is considered to be an “exit drug” for opioid addiction.

The law is significant, Richards said because it will change the experience many people have with law enforcement. 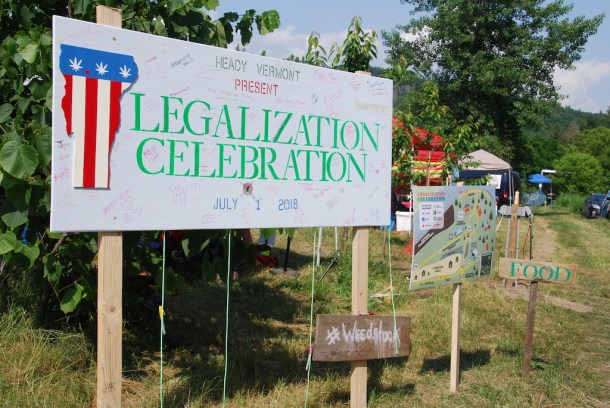 Thanks for reporting an error with the story, "At Johnson farm, 1,600 mark legalization of marijuana in Vermont"