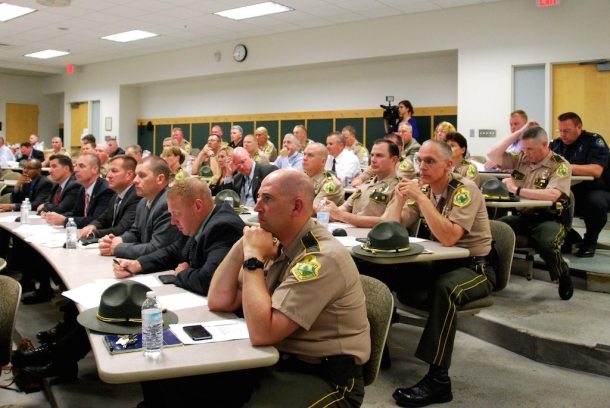 Vermont State Police command staff from across the state attend a report presentation in 2016. Photo by Elizabeth Hewitt/VTDigger

[S]OUTH ROYALTON - The latest figures are in from Vermont State Police for traffic stop data, showing that racial disparities still exist, though that gap is narrowing.

The data was released Monday evening during a meeting of the Fair and Impartial Policing Committee on the campus of Vermont Law School in South Royalton.

“It’s improvement. It’s heading in the right direction,” Tabitha Pohl-Moore, Vermont director of the NAACP, said after the presentation on the most current numbers regarding traffic stops by state police.

“I know that we still that we have a lot of work to do,” said Pohl-Moore, a member of the Fair and Impartial Policing Committee. “I’m still concerned about the disparity.”

Asked what more can be done to further close the gap, Pohl-Moore replied, “I don’t think it’s about doing more of something, it’s about continued persistent.”

Vermont Department of Public Safety Commissioner Thomas Anderson said after the Monday evening session that while he’s pleased with the current trend seen in the numbers, command staff is still digging into the figures.

“It’s extremely important that we collect this data, that we understand this data,” he said.

Under Vermont law, police are required to keep information on traffic stops, tracking how many stops resulted in verbal warnings, tickets, and searches, as well as how often searches of drivers turned up contraband.

The Fair and Impartial Policing Committee is made up of cross-section of Vermonters, including members of the state police, the NAACP, the LGBTQIA Alliance, the Vermont Partnership for Fairness and Diversity, state residents and others. 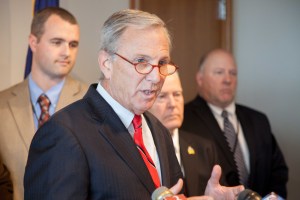 The 2017 data from state police revealed a decrease for the third year running in the rate at which troopers searched black drivers following a traffic stop.

That overall increase, according to Vermont State Police Maj. Ingrid Jonas, co-chair of the Fair and Impartial Policing Committee, is the result of several factors, including better tracking of traffic stops and stepped up enforcement.

Jonas said there has been marked improvement in the quality of the data the police force collected in recently years.

The quality of the data was improved by holding trainings for all officers and civilian staff on the importance of the data collection program, as well as more instruction on how to collect it properly, officials said.

A demographic breakdown of that overall traffic stop figure for 2017 shows:

State police searched 565 operators in 2017, or about 0.009 percent of total stops. A demographic breakdown of those shows searches:

• Asian operators: 4 searches, with contraband found in 4; or 100 percent.

• Hispanic operators: 16 searches, with contraband found in 12, or 75 percent.

In addition, 43.4 of all operators stopped received tickets. A demographic breakdown of those receiving tickets reveals:

“That’s troubling to me,” Attorney Robert Appel, a member of the committee and the former head of the Vermont Human Rights Commission, said at the meeting Monday evening after seeing the racial disparity in the ticketing data.

“To me, it indicates that further inquiry is needed,” he added.

Jonas, the committee co-chair, agreed, saying by collecting the data, command staff can look deeper into the numbers to determine what factors may have contributed to disparities.

Police also talked at the meeting Monday about additional data they want to collect in coming years, such as the demographics of passengers in the vehicles to determine if disparities can be gleaned from that information, too.

“The work is never going to end,” Jonas said.

Thanks for reporting an error with the story, "Traffic stop data still shows racial disparity, but gap is closing"