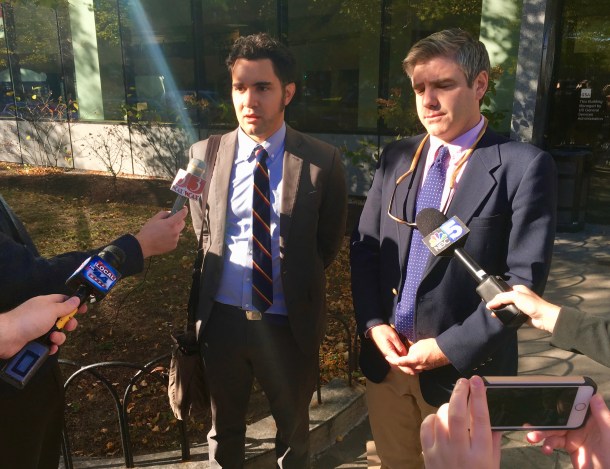 Attorney Jay Diaz, with the ACLU, and Jared Carter, answer questions from reporters on a class action lawsuit they filed on behalf of homeless residents in the city they say are being unconstitutionally evicted from encampments on public land. Photo by Morgan True / VTDigger

BURLINGTON — A federal judge declined to issue a temporary injunction that would block the city from clearing a North Avenue homeless encampment, while a lawsuit challenging the city policy proceeds.

The American Civil Liberties Union of Vermont filed a class action lawsuit on behalf of three men living in the camp, arguing that the city’s plans to remove the men, and its policy for removing homeless encampments more broadly, criminalizes homelessness and violates the Constitution.

In a Friday ruling, U.S. District Court Judge Geoffrey Crawford held that Burlington’s policy for removing homeless encampments does not amount to “a broad prohibition of necessary human conduct,” and therefore does not criminalize homelessness.

Burlington Police Chief Brandon del Pozo said Monday that police, the Department of Public Works and the Department of Parks, Recreation and Waterfront, are “actively coordinating to vacate the camp as we work with its occupants to minimize the impact.”

Del Pozo said no date is set for the eviction to take place. City officials say they will post another notice before clearing the camp.

“While we’re disappointed in the result at this early stage, the case goes on. We will continue investigating the city’s policy and practice, and hope to show it’s different than what is being portrayed,” said Jay Diaz, an ACLU staff attorney.

The three plaintiffs are Brian Croteau, Larry Priest and Richard Pursell. Croteau is a native Vermonter and 30-year Burlington resident who has been homeless since August, 2016. Croteau was living in his car until February, when it was towed by the city. Unable to afford the fee to retrieve it, he began living in the woods.

All three plaintiffs have lived in the camp for several months, according to the lawsuit. The camp has roughly eight residents including the three men suing the city, according to court documents.

City officials originally posted a notice at the camp in early October, telling its occupants to leave by Oct. 23. Anyone who remained would be prosecuted for trespassing, the notice said, and any property that remained would be removed, held for a period, and destroyed.

The ACLU filed suit on Oct. 20 and Judge Crawford initially granted a temporary restraining order blocking the camp’s removal until he could hear initial arguments in the case.

After an Oct. 25 hearing, Crawford extended the restraining order until last Friday when he issued his ruling denying the preliminary injunction, which would have blocked the camp’s removal until the case is decided.

“These plaintiffs have options of moving to other camp sites or engaging in a more robust search for alternative housing through the many avenues supported by the city,” Crawford wrote in his ruling.

The ACLU said their clients made efforts to find space at local shelters. However, Crawford described those efforts as “cursory.”

Burlington does not evict people for trespass from every encampment on city property, but instead, once it becomes aware of a camp, it applies a set of criteria to determine whether it should be removed, Crawford wrote.

That criteria is health and safety, the intended use of the property, repeated violations of law and the camp’s location. The North Avenue camp is located in a designated urban wild with environmentally sensitive sandy bluffs. City officials decided to remove the camp because the bluffs could be damaged by human activity.

A separate encampment off Sears Lane in Burlington’s South End was cleared by police and city workers earlier this month because of concerns about safety and possible criminal activity, officials said.

Diaz said Burlington’s policy leaves homeless people in an untenable situation because they have to guess where they might be allowed to shelter without facing prosecution.

Burlington could take steps to improve its policy on homeless encampments regardless of whether a judge directs them to do so or not, Diaz said.

For instance, the city could designate places in Burlington for homeless people to camp, or it could establish certain places that are “no go zones,” Diaz suggested, actions that would remove some uncertainty for homeless people.

“The city has an opportunity to draft real policies that provide its residents with a legal option,” Diaz said, “Right now, it’s allowing a situation where people living on the margins are forced into a legally precarious place.”

Thanks for reporting an error with the story, "Judge allows Burlington to clear homeless camp"