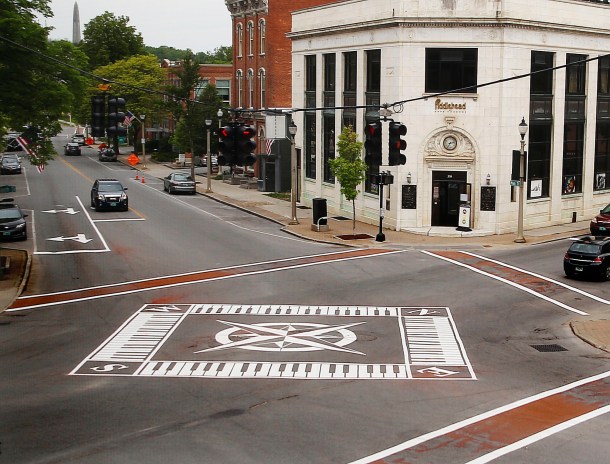 A view of the newly painted compass and piano key design, top left, at the Four Corners intersection in Bennington. Photo by Holly Pelczynski/Bennington Banner

(This story by Ed Damon was first published in the Bennington Banner on May 25, 2017.)

Those who pass through the prominent downtown intersection are now guided by a North Star compass bordered by piano keys in a design painted onto the pavement.

It’s a new public art piece that aims to celebrate the town’s cultural history and give residents and visitors a unique sight to enjoy, according to Polly van der Linde.

“I am delighted to put a bit of happiness in the center of our town,” she said on Wednesday.

It took about three hours on Tuesday night for her and a few others to lay the stencil and paint the design in the intersection, where Main Street (Route 9) meets North and South streets (U.S. Route 7).

Many people offered support leading up to and during the project, Van der Linde said.

She worked with local officials including Town Manager Stuart Hurd. GVH Studio-Graphic Solutions of Bennington created the compass’ letters and one arc. Her husband, Dale Cobb, created, measured and placed most of the templates. Matt Hathaway was the painter.

“I want people in Bennington to know that change can happen, it takes time, patience and perseverance,” she said. The idea grew out of a “flash mob” last summer, when a keyboard design painted on cardboard was placed over a crosswalk at the four-way intersection. Soon after, a Boston newspaper about the town called Four Corners “the center of Bennington,” and stated the town was “built on three cornerstones: history, the love and celebration of food and nature.” But van der Linde said there’s a fourth cornerstone: The arts.

“It’s important to me to stress the arts in our community,” she said.

She brought the idea — to paint piano keys inside the crosswalks — to the Selectboard last fall and pointed to similar projects in New Hampshire and Kalamazoo, Michigan, as examples.

Board members embraced the plan.

But it ran afoul of the Federal Highway Administration: Officials said it would not conform to standards for pavement markings. It was back to the drawing board. But a minor setback didn’t discourage her.

“I wanted to follow through with my promise,” van der Linde said.

She submitted a new design for review, which was deemed OK. The North Star compass shows four directions — north, south, east and west — and is surrounded on all sides by piano keys.

A two-man crew from the town helped paint the intersection at the same time they repainted crosswalks and arrows, according to Hurd. The town provided labor at a cost of about $120; van der Linde donated $1,350 to cover the cost of paint and necessary traffic control.

For van der Linde, it’s been an exercise in how to make change in a community she loves.

“Let’s put Bennington on the map,” she said.

Thanks for reporting an error with the story, "New design graces Bennington's Four Corners"