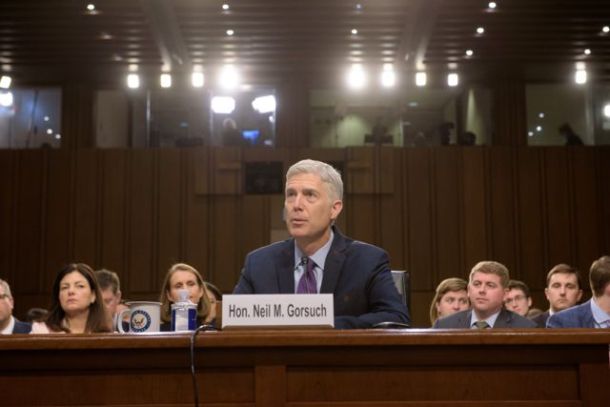 Nomination of the Honorable Neil M. Gorsuch to be an associate justice of the Supreme Court of the United States. Senate courtesy photo

A week ago, Leahy was undecided. After four days of hearings, Leahy told VTDigger in an interview Sunday night, “Philosophically, I’ve seen nothing that will bring me to vote for Gorsuch.”

Leahy said he is waiting for Gorsuch to submit written answers to a list of supplemental questions. But, he added, “I suspect his written answers are not going to change my views.”

Battle lines were drawn by Democrats on the first day of the hearings last Monday. They questioned his stance on abortion, worker protections, religious exemptions, the rights of corporations and his adherence to the theory of originalism.

Leahy, a longtime member of the Senate Judiciary Committee, has participated in confirmation hearings for 14 other Supreme Court nominees.

Of the 14 nominees that have received a Senate vote, Leahy has voted against four nominees — William Rehnquist, Robert Bork, Clarence Thomas and Samuel Alito. Leahy has supported seven nominees of Republican presidents, including current Chief Justice John Roberts and Antonin Scalia, whose seat Gorsuch would fill.

“I don’t have a problem with a conservative judge, I’ve voted for a lot of conservative judges,” Leahy said. “But when you have somebody who won’t answer basic questions on everything from freedom of religion to presidential litmus tests, that’s very troublesome.”

Sen. Bernie Sanders, I-Vt., opposes Gorsuch, because of the nominee’s evasive answers and his views on women, workers, corporations and the Voting Rights Act. “I had looked forward to Judge Neil Gorsuch sharing his views on the Supreme Court’s critical role on some of the most important issues in America,” Sanders said. “Instead, he refused to answer legitimate questions and brought the confirmation process to a new low in a thick fog of evasion.”

The most senior senator, Leahy retains a vision for the chamber as one that promotes bipartisanship and compromise. Leahy has long expressed concern about the politicization of judicial nominees, and he does not support Senate Minority Leader Chuck Schumer’s decision to filibuster the Gorsuch nomination, which would effectively block a full Senate vote.

Arcane Senate rules currently hold that any Supreme Court nominee must receive 60 votes before he or she can be given a confirmation vote on the floor. With Republicans holding a 52-seat majority, current rules dictate that eight Democratic senators must vote “Yes” in a cloture vote to bring Gorsuch’s nomination before the Senate for a floor vote.

If Schumer, a Democrat from New York, and a coalition of Democratic senators filibuster Gorsuch, Senate Majority Leader Mitch McConnell, D-Ky., could rewrite Senate rules and discontinue the filibuster for Supreme Court nominations. In the face of Republican obstruction to President Barack Obama’s federal judicial nominees, Democrats used the so-called “nuclear option” and blew up the filibuster for all executive branch and judicial nominees in November 2013.

“I do think the end of the filibuster hurts everybody,” Leahy said. “I was very reluctant to see us use the nuclear option, thought I don’t think we would have seen any of President Obama’s judges go through without it.”

After Republicans retook the Senate in 2014, Leahy blasted the party for the “glacial pace” of Obama’s judicial nominees, suggesting that gender discrimination and politics was driving the inaction.

In an October 2015 press release, Leahy’s office pointed out that in the last two years of the Bush presidency — when Democrats were in the majority — the party had confirmed nearly four times more judges for the federal bench than Republicans had with Obama.

“If Republican obstruction continues, and if home state Senators cannot persuade the Majority Leader to schedule a vote for their nominees soon, then it is unlikely that even highly qualified nominees with Republican support will be confirmed by the end of the year,” Leahy said at the time. “These are nominees that members of the Majority Leader’s own party want confirmed, including several from Tennessee and Pennsylvania.”

On Sunday Leahy said he was disheartened to see partisan battles being waged over judicial nominees, and he invoked the unprecedented refusal of Republicans to hold a hearing for Merrick Garland, President Barack Obama’s nominee to replace Scalia.

“If politics continues to pervade judicial nominations, Americans will lose faith in the judiciary,” Leahy said. “They have already lost faith in the presidency and the Congress, there’s not much trust left in government.”

During last week’s confirmation hearings, Leahy pressed Gorsuch to explain his judicial philosophy on everything from same-sex marriage to executive overreach.

In an exchange that garnered national headlines, Leahy pushed Gorsuch to denounce a range of Trump policies, from his remarks encouraging torture to his ban on U.S. entry by residents of six Muslim majority countries, which is currently tied up in the courts.

“Do you ban someone solely on their religion?” Leahy asked.

“No man is above the law,” Gorsuch tersely responded.

Speaking on Sunday, Leahy said Gorsuch’s vague answers had not assuaged his concerns about Gorsuch’s independence from the president.

“I’d hope that, whether he was a Republican or Democrat, Gorsuch would would be willing to challenge the president’s policies,” Leahy said. “His unclear answer is what bothered me the most.”

On Monday, the Senate Judiciary Committee will take up Gorsuch’s nomination, though the committee is expected to delay the vote for a week so that senators can thoughtfully review supplemental answers from the nominee. Senate Judiciary Chairman Charles Grassley, R-Iowa, said he hopes Gorsuch can be confirmed to the court by the April recess, a deadline that may be complicated by the threat of a Democratic filibuster. 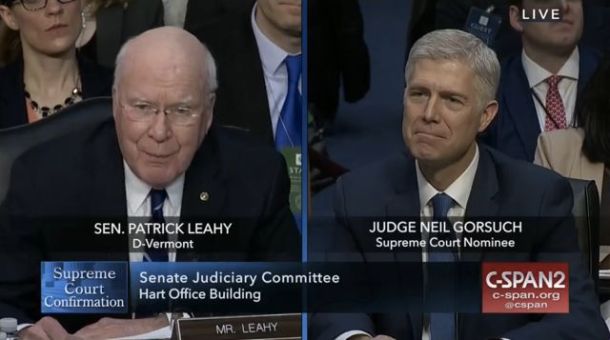 Thanks for reporting an error with the story, "Leahy will not vote for Trump’s Supreme Court nominee"