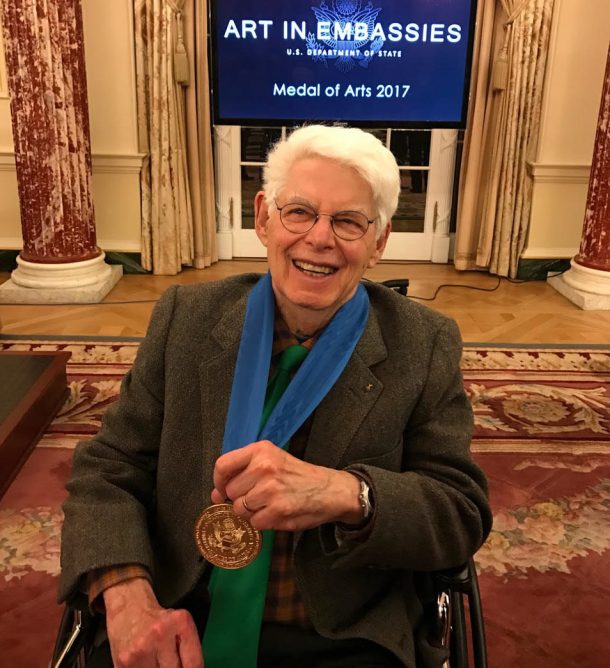 [B]RATTLEBORO — Vermont artist Wolf Kahn has reaped many awards in a life as colorful as his work, but the 89-year-old just traveled to Washington, D.C., to receive his first medal.

“It’s big and heavy, with a blue ribbon you can put around your neck,” he says. “I thought I was getting the Medal of Freedom the president gave to the vice president.”

Kahn, who divides his time between Brattleboro and New York City, was one of six artists recognized by the Art in Embassies program for loaning work to American diplomatic outposts around the globe. 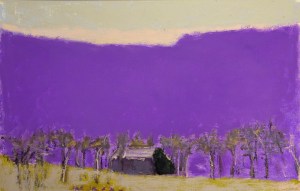 Wolf Kahn’s 2015 “Pink Horizon” is an example of his use of vibrant color.

“Their artwork serves as a bridge with other nations,” award organizers said in a statement, “encourages discussion and expression and highlights the communal experiences of people from countries, cultures and backgrounds worldwide.”

The medal caps an equally far-reaching journey by Kahn, who was born in 1927 in Germany, only to flee his homeland on a “Kindertransport” train that saved Jewish children before the start of World War II. Settling in New York City, he entered the High School of Music and Art in 1942 and the Hans Hofmann School of Fine Arts in 1947, then began his career in 1951.

Kahn joined the Art in Embassies program upon the urging of Jane Monroe Goelet, the wife of the late Llewellyn E. Thompson Jr., ambassador to Russia during the Eisenhower, Kennedy and Johnson administrations.

Kahn can’t name all places where he has loaned his canvases.

“Some paintings just came back from Luxembourg and Kenya,” he says of a long list. “Maybe with the change in administrations — I’m friendly with Hillary (Clinton), I’m unfriendly with (Donald) Trump — I’ll get some more back.”

Kahn has a sense of humor as shiny as his medal.

“I know it’s not gold because I bit it and nothing happened. They have better things to spend tax money on. But when you have a medal hanging around your neck, people take you seriously,” he says.

So much so that the Brattleboro Museum & Art Center is preparing a major summer exhibit of his work in anticipation of his 90th birthday Oct. 4.

“Wolf Kahn is to southern Vermont what Winslow Homer is to the coast of Maine, Georgia O’Keeffe to the New Mexico high desert and Claude Monet to the French countryside,” museum director Danny Lichtenfeld says. “Wolf’s depictions of our barns, fields, trees and hillsides form the prevailing visual impression of our area for people all around the world.”

“I’m not trying to paint Vermont,” he says. “I paint landscapes, and it turns out people who live in Vermont think it looks like our region.”

But wherever his whereabouts, he keeps creating.

“I’m painting more now than I ever did before.”

And conversing. As he reasons: “I haven’t said anything quotable yet.”