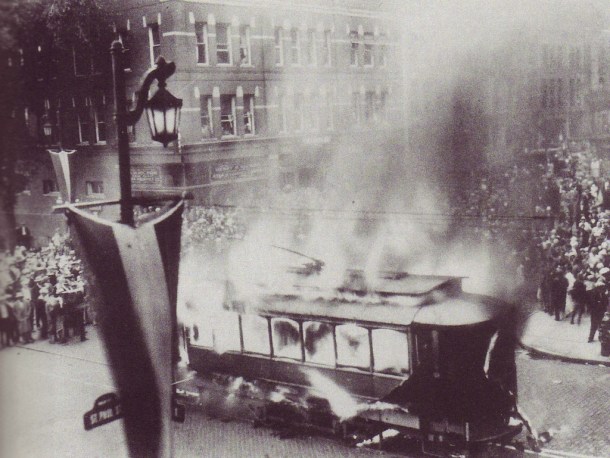 A crowd of thousands gathered in Burlington in August 1929 to watch the ceremonial burning of the city’s last trolley car. Photo courtesy of the Vermont Historical Society

The crowds came from miles to see the show. Thousands of people, between 5,000 and 10,000 by various estimates, crammed into Burlington City Hall Park that day – Sunday, Aug. 4, 1929. Others squeezed together along Main Street or peered from the windows of nearby buildings.

At 5 p.m., after local dignitaries had taken their places on the balcony of the Hotel Vermont, a military band marched down Main Street, playing a dirge. Just behind the band came an old trolley car, draped in black cloth with a wreath of flowers decorating its front. Then came a group of 20 mourners, dressed in black.

The trolley stopped on Main Street, beside the park. Police ordered the crowd to step back as men soaked the car’s interior with gasoline. A trumpeter played “Taps.” Finally came the moment the crowd had gathered for. Two of the trolley company’s oldest employees stepped forward and lit the car on fire. Flames shot through the trolley and rose above the overhead cables that for decades had provided its power.

Vermont’s love affair with the trolley was clearly over.

The relationship had started so well.

Forty-four years earlier, announcing very different festivities, the Burlington Free Press and Times wrote, “The arrangements are all completed for the street railway celebration this evening, and every indication points to the event as one befitting the completion of the first street railroad in Vermont.”

The people of Burlington were proud that their community was joining the ranks of American cities that offered this modern convenience, even if it was three decades after the first had been installed. In coming years, other Vermont cities and towns would add trolleys as well.

The attraction was understandable. Trolleys were an improvement over what passed for public transit before. Since most railroads provided transportation between cities rather than within them, people who didn’t own a horse (and preferably also a buggy) relied on an omnibus, essentially a horse-drawn wagon, or on their feet to get around.

Compared to an omnibus, a trolley was seen as comfortable, stylish, and modern. The new cars were “models of elegance and … fitted up with every modern convenience,” crowed the Free Press.

Burlington got its trolley system in 1885. Soon the Winooski and Burlington Horse Railroad Company changed its name to the more modern-sounding Burlington Traction Company. Despite the name change, for years the trolleys remained horse-powered affairs, as the earlier name suggested.

In 1893, Burlington’s trolley system retired its horses and converted to electricity. The transition wasn’t easy. The system’s owners had to convince wary residents that the noisier, faster cars were an improvement. Former U.S. Sen. George Edmunds objected to the newfangled contraptions running through his neighborhood. He sued to block the electric trolleys, arguing that people along its right-of-way hadn’t given their permission. Others worried the loud cars were a menace because they spooked horses.

But nothing could stop the trolleys, except themselves. The cars were notorious for having trouble climbing steep grades in icy weather and for breaking down, sometimes slipping off their axles.

Some complained that the five-cent fare wasn’t worth it. A popular joke went: “See that fellow over there? He’s a trolley conductor.” “What’s his name?” “Rob Nickles!”

Despite complaints about fares and inconsistent service, trolleys grew popular.

The same year Burlington got its trolley running, the Rutland Horse Railway started. It began with roughly five miles of track and connected the village with West Rutland. Ten years later, the system became electrified and its name was changed to the Rutland Street Railway. Then, after a merger in 1906 that created a diversified corporation, it became the Rutland Railway Light and Power Company. At its peak, the railway carried 3 million passengers a year and covered 35 miles, running to Fair Haven, Poultney and, in summer, Lake Bomoseen.

In 1895, despite objections from one of its leading citizens, writer Rudyard Kipling, the Brattleboro Street Railroad Company began service to West Brattleboro, and the Bennington and Woodford Electric Railway started transporting passengers to Glastenbury, which had an inn, dance hall, bowling alley and fields for picnicking. The Glastenbury line was short lived, however. It was abandoned after a flood in 1898 washed out some of the track.

The Springfield Electric Railway opened in 1897, offering rides to the Boston and Maine Railroad station in Charlestown, N.H. The value of that connection for passengers and freight kept it running into the 1980s.

Also in 1897, the Mount Mansfield Electric Railroad Company began running trolleys from the train station in Waterbury to Stowe Village. The trolley strained the capacity of the local power supply. Residents of Stowe Village said they could tell where the cars were along the route, what hill they were trying to climb, by how the lights in town dimmed.

Saturday nights in Barre proved tough for trolley crews. Rabble-rousers would put blasting caps on the tracks and wait for the ear-splitting boom that came as the trolley passed. In response, the trolley company hired men to perch on the front of the cars to sweep the caps away with brooms.

But the mob retaliated by standing across the tracks, forcing the cars to slow enough so that members of the crowd could pull the sweepers from their perches.

More trolley services opened in 1900. The Bellows Falls and Saxtons River Railroad began running between those two towns, and the St. Albans Street Railway started service along Main Street and down Lake Street three miles to meet steamships docked in the bay.

The last trolley service to get its start was the Bennington and North Adams Street Railway Co., which in 1907 began service south to the Massachusetts state line. 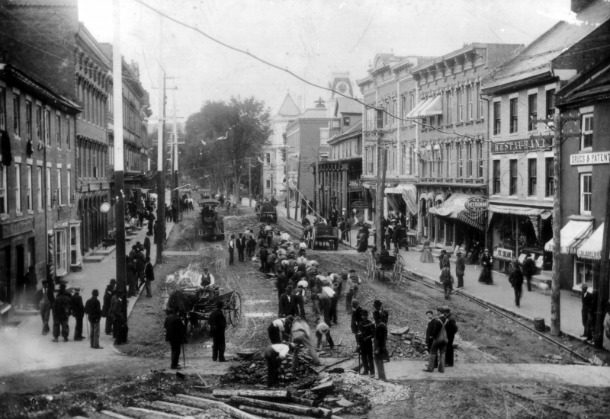 Workers prepare to lay trolley tracks at the corner of State and Main streets in Montpelier circa 1898. Photo courtesy of the Vermont State Archives

Trolleys did more than just give people an alternative to getting around on foot or by horse. In many places, they reshaped the built landscape. Trolleys meant that city centers and villages were no longer limited to the distance a person could comfortably walk. They spurred development along their routes. People with foresight, and access to large amounts of cash or credit, bought property and set up businesses near trolley lines.

Nowhere was this more evident than in Burlington.

Trolleys brought enough people into the city’s center that it could now support a large department store and add hotels and theaters to its core. Other businesses – furniture and clothing stores, as well as doctors and other professionals – also clustered near the lines. The trolley proved so popular that some residents petitioned for the lines to be extended into their neighborhoods.

To emphasize this new convenience, trolley schedules included advertisements for businesses that passengers could now reach easily. Newspaper ads for real estate and businesses also touted their proximity to this public transit system.

While trolleys were condensing Burlington’s central business district, they also expanded the city. They allowed industries to operate on the city’s fringes, since workers had a convenient way to reach factories. Trolleys also enabled the city’s upper and middle classes to build homes farther from the core.

The trolleys’ service area grew, eventually reaching Ethan Allen Park in the north, Queen City Park in the south, Essex in the east, and the Union train depot in the west.

Burlington’s trolley lines offered great views of Lake Champlain, Camel’s Hump and Mt. Mansfield, so the company marketed itself to tourists. “To those desirous of availing themselves of the scenery in and about Burlington, no better way is offered than by one of the numerous rides afforded by the city’s two trolley systems,” read one brochure.

Despite the opposition of some to the trolley’s arrival, it soon became an accepted part of modern life. But the only constant in modern life is change. The next transportation innovation would be the trolley’s undoing. The automobile doomed the trolley. The Flood of 1927, which destroyed miles of trolley lines, didn’t help.

At Burlington’s ceremonial burning of the trolley, the fire was barely extinguished when the next wave in public transit rolled into town. Twenty new buses, lined up two by two, drove down Main Street to the crowd’s cheers. The trolley was dead in Burlington. It might have lingered, but the owner of the new bus company arranged a quick death: He bought the trolley company and immediately closed it.

The old trolley barns were forced into new service. Some were converted into bus garages and forced to house their replacements. One was hauled to a spot beside Shelburne Road, where it served as shelter for attendants at a gas station.

Thanks for reporting an error with the story, "Then Again: Vermont’s love affair with the trolley"