[A] new report from the state auditor casts a spotlight on how fraud is addressed in some of the state’s key benefits programs.

The latest report from Auditor Doug Hoffer’s office zeroes in on four programs managed by the Economic Services Division of the Department for Children and Families. 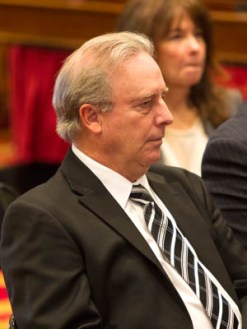 Though the division does have a process for investigating benefits fraud, the report finds that over a span of more than three years, overpayments were found in only two of the four programs.

The report also raises concerns over the effectiveness of the department’s efforts to recoup payment from benefits recipients who commit fraud.

All of those claims were in two programs: 3SquaresVT, which is the state’s branch of the federal supplemental nutrition program formerly known as food stamps, and Reach Up, a cash benefit program for families with children.

The state’s current technology system is incapable of tracking the heating fuel program, according to the report. DCF staff told auditors the risk of fraud in the general assistance program is minimal because eligibility is reviewed frequently.

When someone was found to have defrauded 3SquaresVT, that recipient was disqualified from receiving further benefits from that program, but that was not true of the other three programs.

The report also said the division fell short when it came to collecting money owed by clients who had provided false eligibility information. Repayment agreements expected people to repay the money they owed over a period of one to 75 years — which the report said was “an unrealistic period of time to expect the debt to be fully paid.”

The department didn’t send out regular bills after people defaulted on their debt, nor did it use the Tax Department to help collect the debts, the audit found. 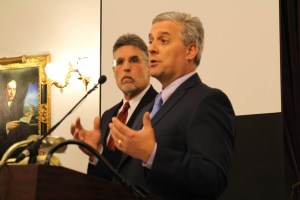 Sean Brown, right, is deputy commissioner of the Department for Children and Families. With him is Hal Cohen, secretary of the Agency of Human Services. File photo by Erin Mansfield/VTDigger

The report made 13 recommendations, including suggestions to improve the system for tracking allegations and to change rules so people who lied about their eligibility can face sanctions.

DCF responded in a letter that the department had begun undertaking some of the recommendations in the audit, including making more prominent the hotline where members of the public can report fraud.

However, some of the recommendations relating to technology are a challenge. The current IT system is outdated, and DCF anticipates moving to a newer system that will serve much of the Agency of Human Services within a couple of years, according to DCF Deputy Commissioner Sean Brown, who heads the Economic Services Division.

Brown said that in many cases of fraud, there are children in the family who could be at risk if benefits are docked.

“Those children are still from a low-income and vulnerable family, and they still have a need,” Brown said.

The department needs to find a way to use “whatever remedies are available to us to make sure the health and safety of children is taken care of,” he said.

Hoffer was sympathetic to DCF’s concern about ensuring that people who need services can access them. However, he said there is a need for the system to deter fraud.

Brown also emphasized that the number of fraudulent payments identified and investigated during the period of the audit is a small fraction in the scope of the Economic Services Division’s work.

According to DCF, during the 40-month period covered in the report, the division delivered $632 million in benefits. The $1.8 million worth of improper payments that the fraud unit substantiated is just 0.28 percent of the total amount paid out, “which is extremely low,” Brown said.

Hoffer said that based on the audit report, it’s difficult to know exactly how widespread fraud is in the benefits programs managed by DCF. It does not appear to be a “significant” number of Vermonters who receive assistance, he said, though he believes “it’s enough for (the division) to pay attention.”

“Whatever the percentage or the numbers are, they have an obligation to protect the integrity of the program,” he said.

Thanks for reporting an error with the story, "Auditor targets DCF’s response to benefits fraud"