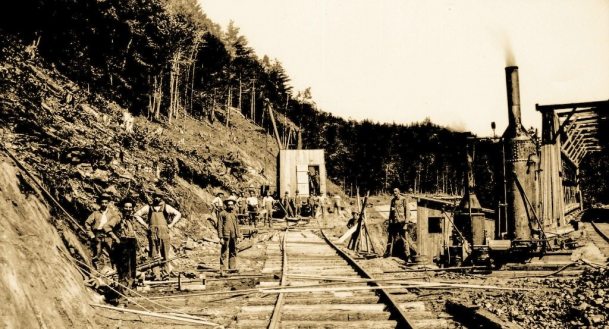 Railroad workers lay track near Danville in the mid-1800s. Many of the laborers who built the railroad in Vermont were Irish immigrants. Photo courtesy of the Vermont Historical Society

[T]he statistics can seem stunning. Over the last quarter century, this state of 625,000 residents has seen a steady influx of immigrants. Since 1989, new arrivals have included roughly 1,800 Bhutanese, 1,700 Bosnians, 1,050 Vietnamese and 770 Somalis, as well as hundreds more from such places as Burma, Iraq, Sudan, Congo-Brazzaville and Congo-Kinshasa. Much of this immigration is happening in Chittenden County, where about 14 percent of Burlington High School students are receiving English language services.

Lost in news stories about this growing diversity in Chittenden County is the fact that this sort of thing is nothing new in Vermont. The nationalities of the newest arrivals might be different, but immigration on this scale, and at times much larger, has been a part of the Vermont story since the state’s inception—and even before.

It’s possible that the first immigrants to Vermont were Native Americans. We just don’t know. We do know that the Paleoindians were the first people to arrive here. They did so some 12,000 years ago. But since the term “immigrants” implies people arriving in an already settled land, these original Vermonters shouldn’t be counted as immigrants. Perhaps one of the tribes that Europeans encountered here—the Abenaki and the Mahican—should be considered the region’s first immigrants, or perhaps they descended from the Paleoindians. Scholars don’t know what links, if any, existed between the Paleoindians and later tribes.

But, the first verfiable immigrants that we know of were the French, who established a base at Fort St. Anne in Isle LaMotte in 1666. Of course, this was before there was any place known as “Vermont.” These French immigrants were soldiers stationed here to further France’s territorial ambitions. They had the dubious distinction of achieving another first in Vermont: being the first Europeans to spend the winter here. Over the course of a few months, many of the 60 Frenchmen died of scurvy.

Starting in the early-1700s, English immigrants entered Vermont. As with the French, the first Englishmen to live in Vermont were soldiers. In 1724, Massachusetts colonial officials arranged for the construction of a fort, dubbed Fort Dummer after the colony’s governor, in present-day Brattleboro. The fort was used to launch forays against Abenakis who had been attacking English settlements in the region.

Elsewhere, France’s King Louis XV tried to strengthen his country’s position in the region by granting land in the Champlain Valley to anyone who would settle it. These “seigneuries,” in the French style, were long, slender strips of land that aimed to give each settler a variety of types of land, including lake frontage, fertile floodplain, and woodlands. Few recipients of these seigneuries ever settled them, however, and most who did ended up fleeing by the mid-1750s after repeated attacks by the English and their Indian allies.

In 1741, the British Crown created the Colony of New Hampshire from land that had belonged to Massachusetts. The Crown also made New Hampshire responsible for maintaining Fort Dummer, though it was some 50 miles from the nearest New Hampshire settlement. New Hampshire’s first governor, Benning Wentworth, used this arrangement to argue he had the right to issue grants west of the Connecticut River and east of Lake Champlain. English settlers gradually moved into this area, then known as the New Hampshire Grants. New York’s governor began issuing competing grants in the area. Though they held grants from rival colonies, the new arrivals were overwhelmingly English.

The English established the boundaries of present-day Vermont, named the region and gave it a government, so some people believe that anyone who arrived after this point were immigrants.

As for the fate of some of the region’s earlier inhabitants, the Abenaki, people have been arguing ever since whether they fled the state for Canada around the time of the Revolution and only returned much later, or never really left and merely went into hiding.

The first to arrive in large numbers after Vermont became a state were the French, or actually the French Canadians. Many crossed the border and settled in Winooski, which by the 1820s had a section nicknamed French Village. More than 1,000 additional French Canadians fled Vermont after a pair of failed rebellions against British authority in 1837-38. French Canadians continued to immigrate, seeking economic opportunity. By 1850, roughly 14,000 French Canadians called Vermont home. They generally settled in the northwestern corner of the state and constituted one-seventh of the population of Burlington and Colchester.

For the most part, French Canadians tried to blend in, many of them Anglicizing their names—Berthiaume became Barcomb, Boucher became Bushey, and so on. And those who kept the French spelling often Anglicized the pronunciation. So we get names like Charlebois, which sounds like “Shar-le-bwah” in French, being pronounced “Charlie-boys.”

During the early- and mid-1800s, Vermont also experienced an influx of Irish immigrants. Like the French-speaking arrivals, many of the Irish arrived from Canada, where they had initially landed after fleeing the Great Famine at home. The need for laborers to build the first railroads across Vermont in the 1840s brought still more Irish into Vermont. By 1850, Irish immigrants and first-generation Irish-Americans constituted 30 percent of Burlington’s population.

Not everyone appreciated the new arrivals. Writer Nathaniel Hawthorne exemplified the attitude of the dominant Protestant Yankee culture toward the Irish when he wrote about visiting Burlington: “(T)hey swarm in huts and mean dwellings near the lake, lounge about the wharves, and elbow the native citizens entirely out of competition in their own line.” 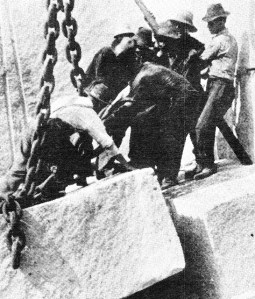 A town leader in Barton tried to make the railroad guarantee that the Irish workers building the line would leave once the work was done. A newspaper editor in Newbury even called for the deportation of all Catholics, by which he meant Irish and French Canadians immigrants. Some Protestants became nervous about their place in society when word circulated of prominent Vermont Protestants converting to Catholicism.

But religions hardly united the newer arrivals either. French Canadian and Irish Catholics tended to worship in separate churches. In Highgate, when Irish Catholics broke from their fellow French-Canadian parishioners, they auctioned off the church pews and used the money to buy a disused Protestant church.

Once they were done laying the tracks, Irish railroad workers settled in Fair Haven, where their presence soon attracted more Irish to the area. They joined skilled laborers from Wales and Hungary in the region’s slate quarries. According to historian Paul Searls in his book “Two Vermonts,” the influx of immigrants helped Fair Haven grow while surrounding towns saw their populations decline.

Like Fair Haven, Barre saw its economy thrive because of a flood of foreign workers. Owners of Barre’s granite quarries actively recruited skilled workers from northern Italy. The Italians began arriving in 1880s, just after an influx of Scottish quarrymen to Barre. Soon other groups arrived, including Spaniards, French Canadians, Swedes, Poles, Austrians, Greeks and Jews. The Italians and Scots brought with them traditions of defending workers’ rights, so Barre became a hotbed of labor organizing and periodic unrest. While the workers often bonded over workplace issues, they usually lived in separate enclaves in the community.

Copper mines in Fairlee, Corinth, Vershire and Strafford also attracted immigrants, as did the machine-tool industry in Springfield and Windsor, which drew workers from Italy, Poland, Russia and Greece.

Not everyone was comfortable with this new diversity, particularly the arrival of so many Catholics. Jacob Estey, founder of the Estey Organ Company of Brattleboro, sought workers exclusively from the Protestant country of Sweden. Redfield Proctor, who had brought in Italian craftsmen to teach the art of stone carving, decided to actively recruit Swedes for his marble operation. Similarly, the state Board of Agriculture initiated a program in 1888 to lure Scandinavian farmers to settle in Vermont, the thinking being that Scandinavians were similar to Yankees in character.

These efforts to discriminate among immigrants were short lived, however. The 20th century saw many of these immigrant groups both gaining acceptance and power in Vermont society.

Today, despite the headlines, only 4 percent of Vermont’s population is foreign born. Of those, the largest group is those who were born in Canada, followed by Germany and the United Kingdom. But Vermont is also seeing an influx of people from the Middle East, Asia, Africa and Latin America. These new arrivals are news because they are adding variety in terms of nation of origin and race to what has long been a diverse, but overwhelmingly European, mix.

Thanks for reporting an error with the story, "Then Again: Immigrants helped Vermont boom"