At several venues here Sanders tried to persuade fierce New Hampshire progressives that they should abandon his “Future to Believe In” and back Clinton’s more moderate candidacy instead.

While Sanders endorsed the former secretary of state in Portsmouth back in July, the Monday morning visit with voters in the Granite State was the first time Sanders has played campaign surrogate for Clinton. The role seemed to fit like a small, itchy sweater. 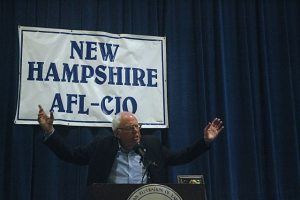 Here at a state AFL-CIO breakfast held at the St. George Greek Orthodox Cathedral, Sanders focused more on the Republican nominee Donald Trump’s shortcomings than he did on Clinton’s strengths. Still, the Vermont senator got the job done.

“On issue after issue, there should be no doubt in anybody’s mind as to whether Hillary Clinton is the superior candidate — because in every respect, she is,” he told several hundred union members gathered for the annual breakfast buffet.

“Brothers and sisters, we are at a momentous moment in American history,” Sanders said. “And that moment is about whether we go forward as a people creating a more vibrant democracy, whether we expand the middle class, whether we end this grotesque level of income or wealth inequality, or whether we move in exactly the opposite direction and move this country toward an oligarchic form of society.”

He deployed lines from his now-dusty campaign stump speech in his Manchester remarks, and past staffers in attendance pointed out that the Vermont senator had spoken at the union breakfast last year, as his campaign was heating up.

The campaign had few frills on Labor Day of 2015, with longtime aide Phil Fiermonte driving Sanders around the state from one small gathering to the next.

On Sanders’ Labor Day tour this year — which included stops in Warner and Lebanon — the campaign charter bus and Secret Service detail that formed a wall around Sanders for the second half of the campaign was gone. Fiermonte was again behind the wheel, driving a small black Ford.

Sanders’ 20-point victory here in the first-in-the-nation primary stifled some talk of Clinton’s inevitability, and revved up his fundraising apparatus. In Manchester, Sanders graciously thanked the crowd for the win.

“What happened here in New Hampshire was instrumental in allowing our campaign to go forward in a 50-state effort with the energy and the enthusiasm that we needed,” he said. “And that’s what you helped do.”

A number of hardcore Sanders supporters said they wished Sanders had prevailed. Many promised not to vote for Clinton while others wore Bernie shirts dotted with a Clinton sticker or button. 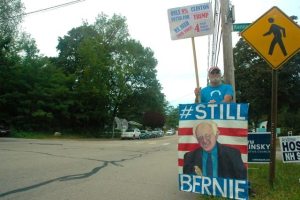 He said that he was voting for the former New Mexico governor because he was the only trustworthy candidate competing in the general election.

“With voting it’s about who you think is ethical and honest,” Carpenter said.

“You hear people saying ‘Oh, I may vote for Gary Johnson or for — for the — Stein,” the senator said, passion in her voice. “What happened in 2000 is Al Gore lost New Hampshire by about 7,000 votes, and 19,000 people voted for Ralph Nader. And we got George W. Bush. And we got the war in Iraq. And we got the biggest tax cuts for the top income earners in our history.”

Deborah Cuenca of Derry was perhaps Sanders’ biggest fan at the Manchester breakfast.

She said she began volunteering for the Vermont senator back when the first New Hampshire field office was established last summer.

“I was in there so many hours, I gained like 25 pounds because I did so much phone banking for Bernie Sanders, honest to God,” Ceunca said, laughing.

A committed organizer, Ceuenca said when Clinton won she stepped away from work on the national race. Instead, Cuenca is focused on down-ballot races, a key component of Sanders’ new political group Our Revolution.

Cuenca is running as a state representative in New Hampshire, and is also organizing on behalf of Steve Marchand, a progressive who is running to replace Hassan as the Granite State governor. (Our Revolution has not endorsed either Cuenca or Marchand.)

Cuenca said that she looked forward to the on-the-ground organizing in the Granite State as a form of exercise.

“I gotta lose that weight, and knocking on doors will help,” she joked.

While Sanders promised on Labor Day to work as hard as possible to help elect Clinton on the trail, his diehard supporters said they felt his endorsement of her seemed disingenuous.

Chris Balch of Wilton, New Hampshire, was another stalwart Sanders supporter. He said he would either write in Sanders or vote Stein. He added that after 45 years of membership he was leaving the Democratic Party.

Balch also said that he would not support Gov. Hassan’s U.S. Senate bid because of her decision to support Clinton as a super delegate.

Echoing a large segment of American voters, Balch said he could not trust Clinton’s promises, asserting her moral character “is essentially absent.”

Balch says it was sad to see Sanders stumping for Clinton.

“He just pulled in, and there are some dedicated Bernie supporters, and he looked wistful, like ‘I’m doing what I’m told to do,” Balch said. “It wasn’t the same big, enthusiastic Bernie face that we remember from Bernie events.”

Thanks for reporting an error with the story, "Sanders stumps for Clinton in New Hampshire"