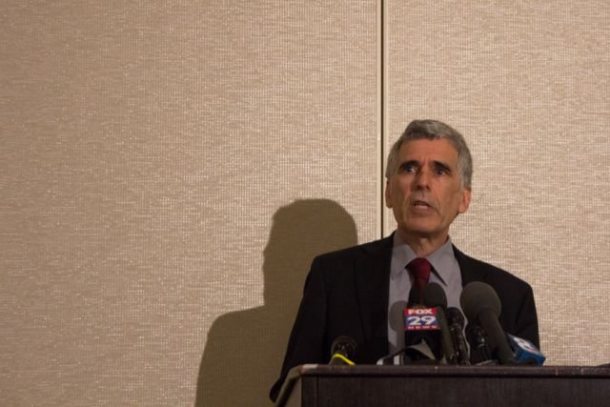 PHILADELPHIA — In a poll of nearly 300 Sanders delegates to the Democratic convention, nearly 90 percent said they are dissatisfied with Hillary Clinton’s selection of Sen. Tim Kaine, D-Va., to be her running mate.

“We’re not waiting for the elites to tell us what to do,” said Norman Solomon, executive director of the Bernie Delegate Network, the group who presented this survey in a press conference earlier this morning.

The group, which includes 1,250 Sanders delegates, is not associated with the Sanders campaign or the Democratic Party.

Solomon said Sanders delegates in the network are angry and disappointed by Clinton’s choice and that “very serious discussions going on about a (delegate) challenge on the floor to the vice presidential pick.”

Delegates, Solomon said, are considering peaceful actions such as walking out, remaining silent, or “vocally renouncing” Tim Kaine during his acceptance speech. He said that Clinton “clearly damaged party unity by choosing Kaine” and wanted the choice of vice president to be debated on the convention floor.

The poll is 10 days old and was taken before the Kaine nomination was confirmed. Clinton announced her choice of running mate Friday. Solomon said the group would repeat the survey in the coming days.

Thanks for reporting an error with the story, "Despite talk of Democratic Party unity, some Sanders delegates feel l..."