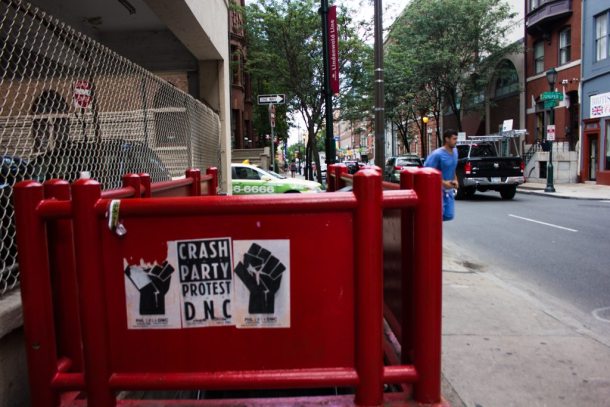 Recent fatal police shootings of black men in Baton Rouge, Louisiana, and St. Paul, Minnesota, and the killings of five police officers at a rally in Dallas and then three officers in Baton Rouge, have added tension to a gathering already marked by conflict.

Discontented with Hillary Clinton’s scheduled nomination, supporters of Vermont’s Bernie Sanders plan to protest in droves before and during the four-day convention, which starts Monday. Philadelphia officials estimate 35,000 to 50,000 protesters will participate in 21 authorized rallies and numerous other events.

The last time a national convention was held in Philadelphia — by the Republicans in 2000 — unrest around the city led to 470 arrests and numerous complaints of unlawful police tactics.

Activists say the 2016 Democratic convention will be different.

“It’s not sunshine and rainbows,” said Michele Grant, of the National Lawyers Guild, “but the Philly police is not as militarized as the response that we’re seeing in Cleveland right now (during the GOP national convention), and we’re not anticipating the same pre-emptive arrests, destruction of personal property and rage that happened prior to RNC 2000.”

Representatives of the lawyers guild and other activists will watch the protests closely nevertheless. “We’re going to be spreading people around according to our capacity, and we expect to have a good number of people to cover just about everything,” Grant said. 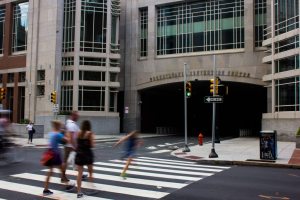 The Philadelphia Convention Center is a few blocks from City Hall, where some rallies will take place next week during the Democratic National Convention. Photo by Liora Engel-Smith/VTDigger

Observers, who will wear bright green hats, will document police activities at the rallies. “We’re just there to watch what happens, see what the protesters do, see what the police do and watch out for unconstitutional police tactics,” Grant said.

Kelvyn Anderson, executive director of the Philadelphia Police Advisory Commission, said the police have made great strides since 2000. “I think we have a different police department now than we did then,” Anderson said.

He said officers handled other protests, such as the Occupy Philadelphia encampment near City Hall in 2011, much better. “It wasn’t perfect, (but) it was certainly better than RNC.”

The four staff members of the Philadelphia Police Advisory Commission will observe police activities during DNC rallies. “We also feel pretty strongly that it’s our responsibility as the city’s oversight agency to be there and see what happens,” Anderson said.

The commission will also monitor any complaints about police misconduct. Out-of-towners, Anderson said, should know they can file formal complaints about police behavior. “If you experience an incident and you go back to your home city and you still need to deal with that formally, we’re open to that, and so is the Police Department,” he said.

Observers from the National Lawyers Guild and the police commission will be joined by 10 Amnesty USA human rights observers, according to Robyn Shepherd, deputy press secretary of Amnesty USA.

And the legal collective Up Against the Law plans to send a handful of observers to protests and marches around Philadelphia. It also says it will provide pro bono legal help to any protesters arrested during the convention.

The city has announced it will issue fines rather than arrest protesters. But Jamie Graham, of Up Against the Law, said he is wary. He said the city took a similar tack before the 2000 Republican convention, yet many people — including him — were arrested.

In June, the city announced it would ready Holmesburg Prison for possible mass arrests during Democratic convention rallies. Officials later said they will not use the facility.

“I’m a little nervous by the fact that they are saying they might open parts of Holmesburg,” Graham said. “Even if they don’t do it, it means that they are thinking of expanding the capacity and holding people.”

Thanks for reporting an error with the story, "Activists set to monitor Philadelphia police during DNC rallies"