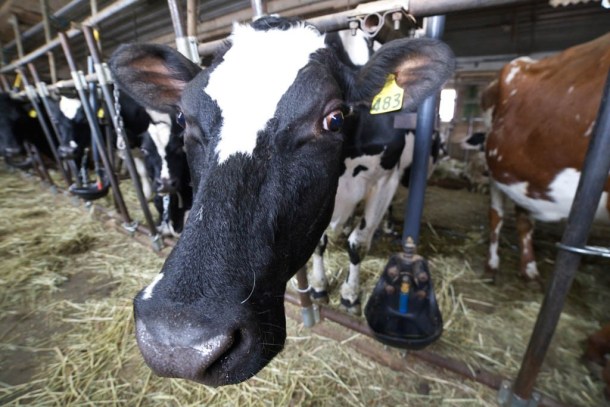 Cows at Mike Eastman's 40-cow dairy farm in Addison feed on grass just weeks before moving outside to graze.﻿ Photo by John Herrick/VTDigger

[M]ilk prices are down across the Northeast and are even lower this summer than they were a year ago, when farmers produced so much milk cooperatives had to start dumping it into manure pits.

In Federal Milk Order Number One, which includes Vermont’s roughly 800 dairy farms, the listed price of milk dropped to $14.73 per hundredweight, equal to a hundred pounds of milk, in May, down from $16.82 a year prior.

Farmers are not dumping their milk right now, but Agri-Mark, one of the major cooperatives for Vermont dairy farmers, can’t guarantee that dumping won’t start later this summer, or even on the Fourth of July weekend.

“Milk prices right now are extremely low, in the $14 range,” said Doug DiMento, a spokesperson for Agri-Mark in Massachusetts. “We don’t expect much price recovery until we get into the late fall.”

“We expect prices to be around the $15 range, $14.75, $15.50 range throughout the summer, and then maybe going up in the fall, but right now we’re not as optimistic simply because of the amount of dairy products in inventories,” Dimento said.

He said the prices are being pushed lower because of an oversupply of milk across the world. Only about 13 percent of U.S. milk is being exported, according to Dimento, down from the typical level of 16 percent to 17 percent.

“Even though that price looks like it’s $14.73, everyone’s receiving less,” Dimento said. “It’s unfortunate that we can’t find, the USDA can’t come up with, a good mechanism to pay farmers fairly for the product they produce.”

Farmers in Vermont say the low prices are caused by shifts in international trade. The president of Russia imposed a trade embargo on the European Union, leading to a glut of milk in the European Union. China is also demanding less milk from the United States, according to Bloomberg. The dollar is strong, and as a result U.S. milk is comparatively more expensive.

Struggling farmers often react by producing as much milk as they possibly can, and the increased supply pushes the price down further. The federal Margin Protection Program gives farmers insurance if the price of milk is $4 below the cost of production, but the subsidy is not substantial enough when prices are this low.

Chuck Ross, the secretary of the Agency of Agriculture, says the federal insurance program has "yet to click in a way that makes a real difference" for farmers. "There is no national dairy policy that helps dairy farmers run their businesses with some stability," Ross said. Congress has failed to address milk supply stabilization, he said, and until policymakers are willing to do so, dairy farmers will continue to be buffeted by market swings beyond their control.

“It’s tough times. It really is. And it doesn’t look to be much improvement at least for the next several months, and it will probably be into next year,” said Robert Foster, who owns the Foster Brothers Farm in Middlebury with this family. “The problem with this is it shakes out whole families. You’re either in or you’re out.”

Beth Kennett owns Liberty Hill Farm in Rochester, part of the Agri-Mark cooperative, with her husband and family. She called milk prices “unconscionably low.” The farm is being paid $14.60 per hundred pounds of milk, she said, but pays between $22 and $23 to produce the milk.

“You can only try to trim costs so far without it having a negative impact on the cows, or the farm, or the family, so you borrow against your equity, you be as creative as you can,” Kennett said. “Those farmers that can diversify are doing so, and everyone—every farmer—is praying for the milk prices to change.”

Liberty Hill Farm started promoting itself as an agritourism destination in the early 1980s, Kennett said, back when milk prices were not only low but the national economy was volatile. She said the difference is that Vermont has substantially fewer farms than in the 1980s.

Paul Doton owns Doton Farm in Barnard, also part of Agri-Mark, with his wife and son. Doton said the farm was most recently paid $15.21 per hundredweight of milk, and the last time he remembers prices being this low was in 2009.

“We’re a family operation, so we don’t have any outside labor, and we’re just able to tighten our belts and just watch carefully to make sure we don’t overspend,” Doton said. He said the family also mows property nearby and makes hay bales for neighbors in order to make ends meet.

“The outlook is not positive right through the middle of 2017,” Doton said. “There are economists around the country who are making price forecasts and there aren’t any that are looking positive or bright right into 2017.”

DiMento, who works for Agri-Mark in Massachusetts, said the cooperative bought extra equipment since last year so it could store milk instead of dumping it. “We’re not dumping milk, but we’ll see what happens over the next couple months,” he said.

“We are strong,” Kennett said. “It’s kind of like the whole mantra from Irene. We are Vermont strong, we are survivors, and we will get through this.”

Thanks for reporting an error with the story, "Vermont dairy farmers struggle as milk prices in the Northeast drop"