After pressure from the media and needling from Hillary Clinton in Thursday’s debate, Bernie Sanders released his full 2014 tax return Friday, reporting more than $200,000 in income.

The majority of the Vermont senator’s family income of $205,617 that year came from his Senate salary of $156,441. He also collected $39,281 in Social Security benefits and $4,982 from a pension from his tenure as Burlington mayor. 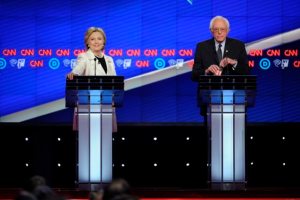 Hillary Clinton and Bernie Sanders in the debate Thursday at the Brooklyn Navy Yards. Photo courtesy of CNN

Sanders’ wife, Jane, collected $4,900 for her service on a Vermont commission addressing radioactive waste disposal. The couple also had small amounts of interest and dividend income.

The Sanders family claimed $56,377 in deductions, which along with exemptions reduced their total taxable income to $140,994.

Sanders had been asked by reporters for weeks to release his tax returns. And during Thursday’s presidential debate in Brooklyn, Clinton took issue with the democratic socialist’s lack of public financial data.

Sanders responded, “Of course we will release our taxes.”

“Jane does our taxes,” Sanders continued. “We’ve been a little bit busy lately. You’ll excuse us. But we will.”

Sanders has now released his tax return for one year, while Clinton’s available data spans decades.

Tax data from 2014 on Clinton’s campaign site shows nearly $23 million in taxable income for her and her husband. Much of that came from consulting, speeches and book deals.

The Clintons paid roughly $10 million in taxes in 2014, an effective federal tax rate of 44 percent.

In the Thursday debate, Sanders asserted that his tax returns are “very boring.”

“No big money from speeches, no major investments. Unfortunately — unfortunately, I remain one of the poorer members of the United States Senate.”

A list compiled by the Center for Responsive Politics estimates Sanders is the 19th poorest of the 100 senators in Congress, with an estimated net worth of $436,013.

Thanks for reporting an error with the story, "Sanders makes first release of personal income tax data"