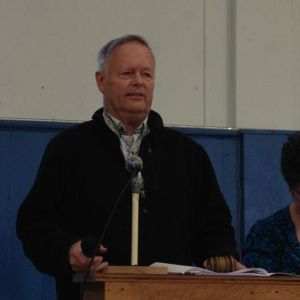 There was a prayer said in Groton before town meeting, but it wasn’t said without protest.

In fact, the time set aside for a religious invocation started with a comment from a resident who strenuously objected to the Selectboard’s resolution to allow the prayer.

Mark Gleicher, who has lived in Groton since 1983, expressed his disappointment with the Selectboard. The issue of prayer is “clearly divisive” for the Groton community, Gleicher said, and even so, the Selectboard passed a resolution without discussing it with the voters.

The resolution, written by Dennis Walton, the pastor of Groton’s First Baptist Church, recognizes “the need for divine wisdom, counsel and blessing upon government entities and civil communities, we do enter into agreement to exercise the God-given privilege to call upon the divine to solemnize the town hall meetings of Groton.” Walton wasn’t present for town meeting.

Gleicher, without looking up, his hands clenching his prepared remarks, said to his neighbors and townspeople: “This is completely inappropriate language for a government entity. What were you thinking?”

There are no parameters on how long someone can pray or what he or she can say, Gleicher said. 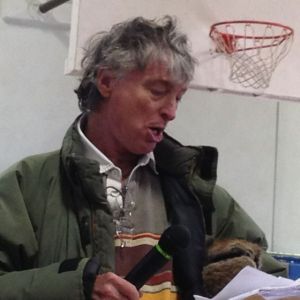 Mark Gleicher, a resident of Groton. Photo by Anne Galloway/VTDigger

Friends and neighbors were staying away from town meeting because of the resolution, he said, “because you [the Selectboard] want to promote something that is not inclusive.”

“You want to pray, go to your church, synagogue, mosque,” Gleicher said. “You don’t have to come to town hall to do it. My prayer, for the moment, if you want to call it that, is for this town to move on and take care of town business.”

Lawrence Daniels then stood up, and cited the town report which allows the moderator “to invite as many citizens who desire to offer prayer to do so in order of their volunteering.”
Daniels started to pray with his eyes closed and head slightly bent. 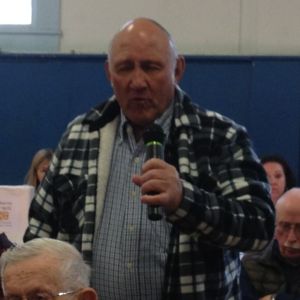 “We are gathered together today so we ask for wisdom from above,” Daniels said. “We ask that there might be heavenly wisdom for our gathering here today. We thank you for the privilege of gathering and be able to have discussion and to make decisions and to agree and disagree. This is a great privilege that we have in America and we pray that that privilege never cease.”

“I’m a former deacon at my church, trustee and Sunday school teacher,” Volk said. I have to agree with Mark, I am shocked by the Selectboard’s wording of the resolution. I think prayer is not appropriate for town meeting. I also know there are people who are not here specifically because of the resolution. With all due respect for everybody, I just wanted to voice that opinion.”

The exchange between the three men at town meeting lasted about six minutes before the moderator turned to town business. A group of women who were huddling outside in the cold asked if the prayer business was over. When they were told it was over they made a beeline for the community center door.

Brent Smith, a Groton justice of the peace, said at the end of the meeting, the town passed a non-binding resolution that rescinds the Selectboard resolution and asks town officials to bring any future resolutions to the voters with a 60 day notice.

ACLU will challenge ‘if Selectboard persists’

Groton, of all places, seems an unlikely battleground for civil liberties.

But it’s here — a sleepy town between the Northeast Kingdom and Upper Valley — that Walton, a Baptist minister wanted to re-establish prayer at town meeting. The Selectboard obliged and adopted a resolution allowing citizens to “volunteer” prayer offerings.

That caught the attention of the Vermont American Civil Liberties Union of Vermont. “Folks were staying away from town meeting because of this,” said Allen Gilbert, the executive director of the local chapter. “That’s the opposite of what you want to have happen at town meeting.”

The civil liberties group, Gilbert said, would help anyone who wants to challenge this “if the Selectboard persists in calling for prayers.”

The Vermont ACLU has fought this battle before. The chapter went to bat for Franklin resident Marilyn Hackett who complained about her community’s town meeting prayer starting in 2004. Her legal complaint set off a court battle that ended in 2012 when Superior Court Judge Martin Maley ruled the invocation violated the state constitution.

But the Hackett ruling covers only Franklin County. Still, lawyers with the League of Cities and Towns soon after advised all communities to abide by the decision.

Then in 2014, the U.S. Supreme Court voted 5-4 that the nation’s Constitution allows prayer at public meetings. That spurred Walton, pastor of Groton’s First Baptist Church, to ask to restore the tradition during “other business” at last year’s town meeting and formalize the request to the Selectboard this January. The three-member Groton board ultimately unanimously supported Walton’s resolution.

A definitive answer to the plan’s constitutionality will come only if someone takes the issue to the Vermont Supreme Court.

“How the court would rule,” said Maura Carroll, an attorney for the Vermont League of Cities and Towns, “we can’t predict.”

Thanks for reporting an error with the story, "Prayer and protest in Groton over religious invocation"