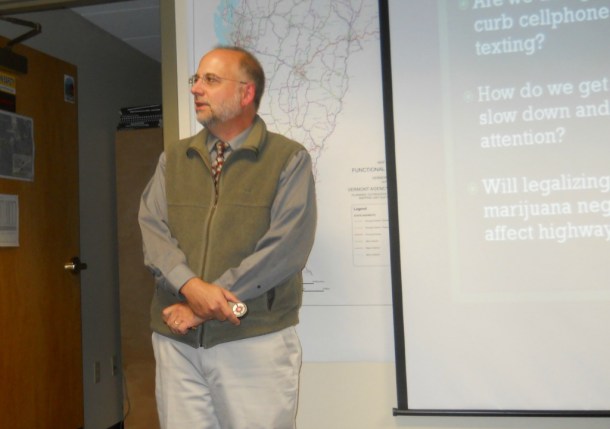 [T]he Vermont Transportation Board wound up annual, legislatively mandated listening sessions last week with a meeting attended by more than 40 in Middlebury. The series of eight forums focused this year on the decline of driving, with a secondary discussion of the impacts of marijuana legalization on highway safety.

John Zicconi, the board’s executive secretary, led the discussion about “how to navigate Vermont without the use of a car.” While Vermonters drove 8.4 percent less in 2013 than they did in 2007 in terms of vehicle miles traveled (VMT) per capita, residents here still drive more than the average for three rural comparison states. The average number of miles travelled nationally is almost 20 percent lower than Vermont’s average, according to Zicconi.

While alternative transportation advocates dominated the audience, almost all present raised their hands when asked if they owned a car. About half the car owners said they wanted to drive less than they did, Zicconi said.

One alternative to car ownership that Zicconi put forward as “kind of an extension of public transit” is car-sharing, such as provided by CarShare Vermont, a Burlington-based nonprofit operating a fleet of 18 vehicles.

The state is helping to underwrite the cost of operating two CarShare cars stationed in Montpelier, and the rest of the fleet is based in Chittenden County. Depending on the results of the Montpelier trial, the state may bring the program to other communities around the state, Zicconi said.

“Car-sharing really doesn’t exist in communities [as small as Montpelier], but VTrans helps, subsidizing that, so that we were able to give it a try,” CarShare Vermont executive director Annie Bourdon told VTDigger in a telephone interview.

The Middlebury audience also wanted to know why the state hasn’t done more to create bike lanes on the state’s roads. Jono Chapin of New Haven pointed out that under a little-known state law “any construction, or reconstruction, including upgrading and resurfacing projects on [major state] highways, shall maintain or improve existing access and road surface conditions for bicycles and pedestrians along the shoulders of these highways … unless the agency deems it to be cost-prohibitive.”

Nick Marro, the chair of the Vermont Transportation Board, said VTrans “is working at that, but there are a lot of roads that still need to be done.”

Asked afterward why, for example, a 2013-2014 resurfacing of Route 12 between Montpelier and Northfield had not added bike lanes to the shoulders, Marro said, “If they don’t have the money, they don’t have to do it. There’s a lot of wiggle room in that statute.”

Attendees made their case for such things as re-striping of reconstructed roads to include bike lanes, more effective plowing of bike lanes, better education of drivers on the rights of bicyclists – and better education of bicyclists on highway courtesy. As the discussion moved on to transit, several individuals pleaded for enhanced coordination of bus and train services and more workable bus-to-bus connections. One woman, who did not identify herself, said it took five hours to get from Middlebury to Bennington to visit her daughter via public transit, “and that’s if the buses are running. By the time I get there, it’s pretty much time to come back.”

The federal government’s recent award of $10 million to upgrade the Burlington-Rutland rail corridor for passenger service elicited favorable comments. But one man, who declined to identify himself, bemoaned the difficulty of reaching the existing Rutland Amtrak station, and recommended launching a connecting bus along the Burlington-Rutland route now. “To have a bus while you’re waiting three to five years for a train would be helpful,” he said. The state does subsidize a bus on the route, but it does not connect with trains.

Marro cautioned that the Legislature boosted the gas tax in 2013.

Zicconi said the sentiments voiced in Middlebury differed little from those heard at the seven other forums held this year. “People are facing the same issues of trying to divest themselves of automobile time,” he said.

“What the state is able to do, what it should do, and what it can do is what [VTrans] and the Legislature discuss every year. But the conversation has to start with what the public wants. … You have to get down to the grass roots and find out what really works for people.”

While audience members articulated the need for everything from better sidewalks to an Amtrak station in Vergennes, legislators including Rep. Dave Potter, D-Clarendon, had also asked the board to take the pulse on attitudes about driving stoned, given the debate building over possible legalization of recreational marijuana, Zicconi told VTDigger. Police statistics he cited at the forum pointed to cannabis, synthetic or natural, as a contributing factor in more than 15 percent of Vermont’s fatal highway accidents over roughly the last six years.

But the subject didn’t generate much discussion among attendees at the hearing.

When highway safety issues come up, Zicconi said, meeting attendees generally have been “much more interested in talking about speed, distractions and cell phones, not marijuana.”

Reached for comment, Potter said that, regardless of the apparent dearth of interest in the question, “this is a legislative issue, the legalization of it, and I have a concern as many other people do, on what the impact legalizing it would be on traffic safety in Vermont. … Maybe somebody believes that marijuana has no effect on driving skills, but I think we should be thinking about that.”

Contacted by VTDigger with a brief summary of the concerns citizens raised in Middlebury, Rep. Pat Brennan, R-Colchester, who chairs the House Transportation Committee, threw cold water on the audience’s wish list.

“I hear what people are saying they want to tax the heck out of gas,” Brennan said. But since lawmakers already boosted the tax in 2013 he “doesn’t see that happening again in the near future. I don’t see any appetite for that.”

Brennan said it’s unrealistic to expect VTrans to connect all the bus routes in Vermont.

“You can’t connect every town in the state,” he said. “It’s just cost-prohibitive. Every year we do take a real serious look at things, and we add a couple of routes every year – intercity and local bus routes . … We chip away at it year after year.”

As for better road access for bikes, Brennan has mixed feelings. “This is a tough one for me. I am sympathetic with the bicycle community … [but] I’m not even willing to talk about this [in the Transportation Committee] unless I can sit down with the bike community — I’d like to see what their commitment is to educating their own people on bike courtesy, on bike safety.”

Most bicyclists, he said, are staying away from an off-road bicycle-pedestrian route built in Colchester, in favor of a parallel road. “I’ve heard from some bicyclists, ‘You can’t go fast enough on it.’”

Thanks for reporting an error with the story, "Transportation board told public transit is a high priority"