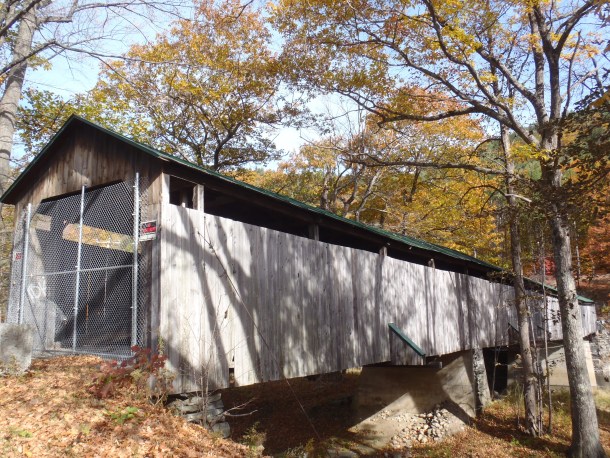 TOWNSHEND – Since early 2012, the historic Scott Covered Bridge has been considered so dangerous that even pedestrians have been barred from crossing.

That’s about to change. A contractor is set to begin a nearly $2.2 million, 14-month rehabilitation project designed to restore pedestrian access and ensure long-term preservation of the 145-year-old bridge, billed by some as Vermont’s longest.

“I think the historic part really weighed heavily in this,” said Matt Mann, a transportation planner with Windham Regional Commission.

Scott Bridge dates to 1870 and reaches 277 feet across the West River, connecting Vermont 30 with State Forest Road in Townshend. While a 2012 engineering report dubs it “the longest covered bridge residing entirely in Vermont,” others list the nearby West Dummerston Covered Bridge as 3 feet longer.

There also are differences in the way the two spans are supported and in their functionality: West Dummerston allows one-way vehicular traffic and is sometimes called the state’s longest covered bridge “still in use,” while Scott Bridge has not hosted motor vehicles since the mid-1950s.

While the title of “longest” may be in dispute, the historic status of the Scott Covered Bridge is not. It was the first bridge chosen for preservation by the Vermont Historic Sites Commission (now called the Division for Historic Preservation) in 1955, when the state took ownership of the structure. It was placed on the National Register of Historic Places in 1973.

The bridge also has undergone several renovations. For example, not all of the bridge was covered initially, according to the 2012 engineering report by Hoyle, Tanner & Associates. Concrete was added to two western piers in 1915, and a new concrete pier was installed in 1981 to support the bridge’s 166-foot-long town lattice truss.

Those additional supports did not keep the state from shutting the bridge entirely in February 2012 due to worsening conditions. The subsequent engineering report listed numerous problems including trusses that were in “imminent failure condition.” A “no-build” alternative, the report said, “would not prevent further deterioration, which could cause eventual collapse of the covered bridge into the West River.”

Emergency stabilization work performed later that year kept Scott Bridge standing. Before that relatively small project happened, “the concern was that the bridge would not be able to hold its own weight given the upcoming winter and additional weight from the snow,” Mann recalled. “It was minor from a cost standpoint, but it served the purpose of extending the life of the bridge until they could find the money (for further repairs).”

That money is now allocated for Scott Bridge: Mark Sargent, project manager for the state Agency of Transportation, said 81 percent of the price tag will be covered by federal funding, with the remainder coming from the state.

Vernon-based Renaud Brothers Inc. was chosen for the job. The company has extensive local covered-bridge experience, having worked on the Dummerston bridge as well as Brattleboro’s Creamery Bridge.

“They’re likely going to start construction soon, and possibly this week,” Sargent said, adding that completion is scheduled for the end of 2016.

The initial portion of the project – insertion of steel beams – is geared toward simply making Scott Bridge a safe place to work. “It’s a structure with unique challenges,” Sargent said. “The first thing that has to happen is that it has to be (stabilized).”

The rehabilitation project that will follow includes installation of a new roof, a lighter deck and replacement of lattice that is “split or rotten or cracked,” Sargent said.

“If you look at it, you’ll see one of the arches warped and lying on the floor. That’s causing a bit of trouble. That’s the side where the bottom (bridge) chord is cracked all the way through.” Sargent said. “That arch has lost its shape and is now lying on the floor, and it’s fairly heavy timber.”

There was no serious consideration given, officials said, to trying to restore vehicular access to Scott Bridge. That would have required much more extensive rehabilitation and a higher price tag.

The bridge, prior to the 2012 closure, was a walkway to a student bus stop. And Sargent said VTrans looks beyond vehicular traffic to evaluate all uses of a road or bridge.

“We always take that into account with every state project,” he said. “We’re interested in serving all forms of transportation. When this is finished, cyclists can ride through the bridge.”

Sargent said the Scott Bridge project may, at times, cause short-term lane restrictions on Vermont 30. But he added that “I don’t anticipate any significant inconvenience.”

Thanks for reporting an error with the story, "Historic Townshend bridge set for $2.2M fix"