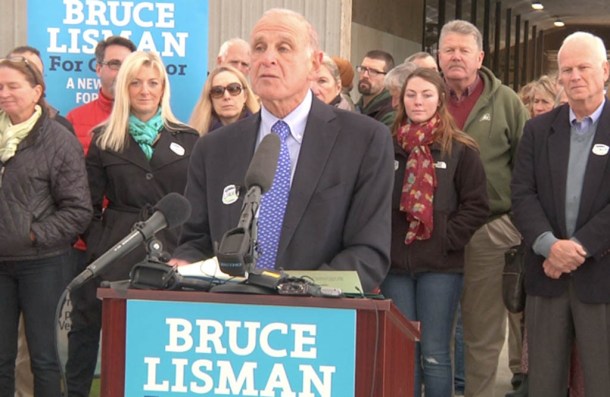 Bruce Lisman kicks off his campaign for the Republican nomination for governor Monday at a dairy farm in Sheldon. Photo by Jasper Craven/VTDigger

[S]HELDON — Republican gubernatorial hopeful Bruce Lisman kicked off his campaign in the heart of dairy country Monday, portraying a bleak picture of a Vermont in need of an overhaul from a Montpelier outsider.

“If we continue to elect the usual people, we’ll be lucky to get the usual results,” Lisman said to a crowd of roughly 30 supporters amid the mooing calves at the Green Mountain Dairy Farm. “Well, I’m here to tell you I’m not the usual guy, I won’t say or do the usual things and I believe I can fix what’s wrong.”

Lisman, who founded the policy organization Campaign for Vermont in 2011 and often refers to himself as an independent, frequently criticized Gov. Peter Shumlin and his administration during his short speech, saying “our government has forgotten who it serves.”

The former Wall Street executive called Vermont's tax system “busted,” said the growing state budget was an “enemy of the people and the economy” and called the recently passed education reform bill, Act 46, a “package of misery.”

Lisman said he would repeal Act 46 so that school choice and community control were preserved, and pointed to other sectors where Vermonters are losing autonomy, including laws around water quality and renewable energy.

After bemoaning the cost and technical difficulties surrounding the rollout of Vermont Health Connect, he called the Shumlin administration’s work “primitive management at its worst.”

While he made it clear that Vermonters should have more local control on most issues, Lisman said the state should dump Vermont Health Connect and join the federal exchange.

He called for a two-year moratorium on renewable energy projects, saying they often damaged the well-being of those living close to the projects. He suggested a law for energy projects similar to Act 250, which created a stringent review process for development in the state in order to preserve community and aesthetic characteristics.

He said property taxes should be lowered, but did not specify by how much and how, and said the state budget should not grow by more than 2 percent in each of the next three years.

“The state budget grows at 5 percent a year while the economy grows at 3 percent,” he said. “And the consequences of that are very bad.”

While much of the speech was focused on what needed to be repealed or rolled back, he did speak about the need to boost educational opportunities, the economy and the state’s population.

Lisman has never held public office, but he has been active in Vermont politics over the past few years while leading and funding Campaign for Vermont, a conservative-leaning policy group. He announced his intention to run last month.

Lisman, 68, grew up in Burlington and graduated from Burlington High School. He attended the University of Vermont, and said he worked his way through school as a waiter and roofer.

Most of Lisman’s career was spent in New York City. He spent 20 years as co-head of Global Equities at Bear Stearns before moving to JP Morgan Chase & Co. to become chairman of their Global Equities Division.

John Powell, a longtime friend of Lisman’s who owns a large homebuilding company in Essex Junction, said Lisman’s Wall Street work made him a good manager and brought successful outcomes.

“Please resist the easy temptation to dismiss Bruce, as his opponents would suggest, with the phrase ‘a successful Wall Street executive,’” Powell said.

Lisman both defended the experience gained at the banking giant while distancing himself from the institution.

“Neither I nor the businesses that I ran had anything to do with the financial problems you read about in the press,” he said, referring to the 2008 collapse of major banking institutions, including Bear Stearns, which showered loans on people with weak or subprime credit scores.

Lisman spoke in the calf barn of the Green Mountain Dairy Farm, a large family farm with about 900 heifers on-site. The Rowell family runs the operation and Bill Rowell endorsed Lisman at the event.

Lisman’s only Republican challenger is Lt. Gov. Phil Scott, who holds a significant lead over Lisman in popularity and name recognition.

Lisman is scheduled to embark on a two-day tour around Vermont following his announcement Monday, likely hoping to boost his visibility with Vermont voters.

Lisman touted his role as an outsider as the distinction that would allow him to be an effective governor. And he often criticized the state’s political class.

But reporters questioned how much of an outsider he really was, citing his extensive work with Campaign for Vermont over the past several years.

Lisman repeatedly refuted the suggestion, saying he was not a politician.

“Don’t you become a politician today?” a reporter asked.

Lisman paused for a moment, apparently in thought. “Yes, I guess I do,” he said.

Thanks for reporting an error with the story, "Lisman slams Shumlin, budget growth, Act 46 at kickoff event"