Editor’s note: This article is by Tommy Gardner, of the Stowe Reporter, in which it was first published Oct. 1, 2015.

“You can probably even hear it, that buzzing, on the line right now,” Ryan Meravi said Tuesday, speaking from a FairPoint Communications landline at his Lower Leriche Road home in Stowe. 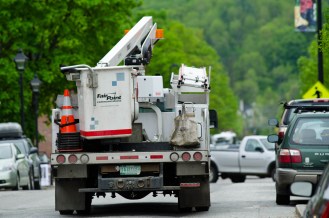 Indeed, there was a constant low hum throughout the entire phone conversation as Meravi added his voice to a local chorus of complaints about Vermont’s largest telecommunications provider.

FairPoint is still the subject of a Public Service Board investigation into its “adequacy,” even though it recently agreed to a settlement with the state.

If the board accepts the settlement, the investigation could be dropped, and FairPoint would agree to give rebates to all customers who were out of service for more than 24 hours between April 1, 2013, and Feb. 28 of this year. Also under the settlement, FairPoint agrees to accept $8.8 million in annual federal Connect American Fund money to improve its statewide telecommunications infrastructure, expanding broadband to 28,400 locations in Vermont.

Of course, complaints about FairPoint aren’t limited to its phone service; plenty of locals complain about its Internet service, too.

But according to state Rep. Avram Patt, a Democrat who represents Morristown, Elmore, Worcester and Woodbury, since the Internet isn’t a regulated utility, the Public Service Department has to go after FairPoint however it can, especially after a network outage last year prevented people from making phone calls for five hours, even to 911.

“The hook the department has is they are regulated as a phone company,” Patt said.

In a statement last month, Beth Fastiggi, FairPoint’s Vermont president, said the company is dedicated to improving its service throughout the state. Overall, FairPoint has invested nearly $100 million in its Vermont broadband network and has added 1,100 miles of new fiber. 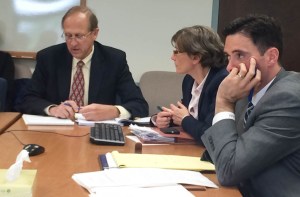 Representatives of FairPoint testify before the Public Service Board at a hearing in Montpelier in June. Photo by Erin Mansfield/VTDigger

“With our settlement with the Department of Public Service and our new six-year (Connect America) commitment, we look forward to delivering better customer service and broadband to even more rural locations across Vermont,” Fastiggi said. “We know that access to broadband opens a door to the world for both residents and businesses that is fundamental to Vermont’s future economic growth.”

Nearly a dozen Stowe and Morristown-area FairPoint users — both current and former — were interviewed for this article, talking about their experiences with slow Internet speeds, muddy-sounding telephone conversations, and shoddy customer service. The prevailing local opinion is that the company is definitely not adequate.

Meravi, a former Power Shift employee who now runs his own website design company, blames the old underground wiring going into his home for his and his neighbors’ slow Internet speeds.

He actually had to ask FairPoint to downgrade his Internet service because he’s able to get only half the 3-megabits-per-second Internet speed he was paying for, and even 3 mbps isn’t exactly life in the fast lane.

“I’m lucky enough we live in a duplex so I can tap into the other connection,” Meravi said.

Morristown resident Rob Koniuto said he feels like “I know every technical support person there,” since he has called FairPoint every time his Internet went on the fritz. Which has been a lot in the past year. Even when his Internet is working, he has a download rate of 0.75 mbps, lower than what is considered even a basic level of service.

“Customer service is bad enough nowadays, but this is the worst company I’ve ever seen,” Koniuto said.

Koniuto said he’s paying $34 a month for something that often doesn’t work at all, although that wasn’t always the case. “Something really changed last summer,” he said, a timeline that fits with other people’s experiences with FairPoint going bad.

Also echoing what other people said, Koniuto complained that, when he calls tech support, the response to the customer is often “the problem is internal,” which means nothing’s wrong on the FairPoint end.

“That’s what bums me out the most — and it’s not me, it’s everybody having these issues — but FairPoint makes it sound like it’s just you,” Koniuto said.

In Elmore, David Kuhfahl has been struggling with his Internet service since June, and has called the company numerous times, only to be told the same thing every time — reset the modem — and each time he’s treated as if it’s the first time he called.

“The Internet is completely erratic. It is fast one moment and gone the next,” Kuhfahl said in an email Monday night. “Tonight it is really bad again. But it could also be fine in five minutes. No predictability.”

North Carolina-based FairPoint had a rocky start in 2008, when it bought Verizon’s telephone landline operations in Vermont, New Hampshire and Maine for $2.4 billion.

The acquisition made FairPoint one of the 10 largest telephone companies in the U.S., but it filed for bankruptcy protection the very next year. Former Verizon shareholders who had been promised a total of roughly $1 billion in FairPoint stock lost all of that in the Chapter 11 filing. 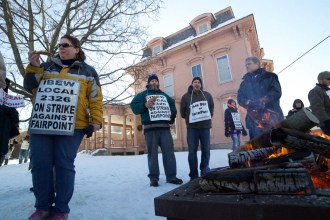 About two dozen picketers and workers supporters gathered outside FairPoint offices in Montpelier in January where pizza, doughnuts and soda was served around a small fire pit. File photo by John Herrick/VTDigger

FairPoint emerged from bankruptcy in 2011, but it had another PR disaster last year, when it froze the pensions of 2,000 employees. They went on strike in September 2014, and the company brought in temporary replacement workers from all over New England, the Eastern Seaboard and even as far away as California and Oregon. In the first three months of the strike, the Public Service Department received 388 “quality of service” complaints about FairPoint.

And then, Black Friday happened. The day after Thanksgiving last year, a network disruption kept FairPoint’s Vermont customers from making outgoing calls for nearly six hours. It was what FairPoint spokespeople called a “perfect storm” of circumstances — including literal storms throughout New England — that led to the disruption. Even calls to 911 were unable to get through.

The Vermont Public Service Department had had enough.

“This network issue endangered the public health, safety and welfare of Vermonters,” Jim Porter, the department’s telecommunication’s director and lead investigator, wrote in a petition Dec. 1, 2014, asking the three-member Public Service Board to open an investigation into Fairpoint’s “adequacy.”

The Public Service Board said it had found several “common themes in customer complaints about FairPoint” that it wanted addressed in the investigation:

But not everyone has given up on FairPoint. The Public Service Department recognized, in the Aug. 10 memorandum of understanding with FairPoint, “Since the board opened the investigation, FairPoint has continued to invest in its telecommunications infrastructure, and its service quality has generally returned to pre-strike levels, as indicated in the most recent quarterly service-quality report.”

Lamoille County Sheriff Roger Marcoux is chairman of Vermont’s Enhanced 911 board, and he said the board also has faith the settlement — particularly the investments subsidized by federal money — will change the Vermont telecom network for the better.

The board certainly needs that to happened; this summer, it contracted with FairPoint for the statewide 911 system. The 911 board trusts the Black Friday incident was an isolated one; luckily, no tragedies were reported during that extended outage.

“The bottom line is, in this business, things are gonna happen,” Marcoux said. “It’s how quickly you can overcome a negative situation that’s going to make or break you.”

Barb Neal, a Stowe resident and the executive director of the 911 board, said FairPoint was chosen to handle the state’s 911 system after five years with Colorado-based 911 technology provider Intrado. She said there were a couple of reasons to choose FairPoint, including the company’s favorable bid for the contract.

But also, the 911 board thinks the company “moves us further down the road” with the future of 911 technology. For instance, people don’t just call 911 anymore; sometimes they text. Neal said she can’t comment on FairPoint’s regular phone or Internet services, just its 911 technology.

“In short, what it does is position us well to respond to requests the way people choose to communicate,” Neal said.

Can you hear me now?

Still, for many people, 2015 has been the summer of switching from FairPoint to another company. That is, if they can.

“In places where you have a choice, you can go to another provider for Internet,” Patt said. “But certainly in rural parts of the state, they’re the only Internet provider.”

Mary Brosseau lives in the Cady’s Falls area of Morristown, where her phone didn’t have a dial tone for 10 days, Sept. 13-23. She called FairPoint three times, and the customer service representatives “continued to tell us the line was testing fine on their end.” Her family switched to Comcast.

“We have had nothing but horrible service from the beginning,” Brosseau said.

Black Cap Cafe in Stowe also switched, going over to Stowe Cable when FairPoint’s Internet would dip at exactly the wrong moment and render the credit card reader inoperable, and customers unable to surf the web.

“Their service is terrible,” Tammy Aimes, a Mountain Road resident in Stowe, wrote in April. “My Internet will kick me offline for no reason sometimes and the router doesn’t even know it lost connection. I won’t be continuing my service with them after my contract is up.”

Waterbury resident Lynda Schoenbeck said she even took her complaints to the state Attorney General’s Office, and was told it “had been stonewalled and treated just as disrespectfully as I was.” She is now “getting excellent service from Verizon and Comcast.”

Koniuto’s family has switched to an AT&T Unite Pro 4G LTE Mobile WiFi Hotspot, which turns a cellular device into a Wi-Fi box. But although the speed is great, he said, it’s not ideal. For one thing, it costs four times more than FairPoint. For another, he and his family are constantly checking to make sure they don’t use more than 30 gigabytes of data a month.

“I feel like I’m driving a leased car, looking at the odometer,” he said.

Thanks for reporting an error with the story, "FairPoint target of complaints from Stowe area customers"