[B]ernie Sanders’ first apartment in Burlington – the city where he found his political footing and went on to become mayor – is just blocks from bustling Church Street. And it’s vacant.

There is no sign that Sanders lived there, and the landlords were bemused by the idea of a tour of the place.

The home with an attached two-story, 2-bedroom apartment hasn't changed much since Sanders moved in with his 2-year-old son, Levi, in 1972.

Sanders grew up in Brooklyn, went to Chicago for college, traveled through Europe and Israel and briefly settled on West 20th St. in New York City with his first wife, Deborah Messing. After that he became a Vermonter, moving to Stannard with his girlfriend Susan Mott Campbell before setting up shop as a single dad in Burlington at age 29.

At his first apartment in Burlington on Maple Street, Sanders found the first stable home he’d lived in since growing up.

He had separated from Campbell, Levi's mother, and he worked as a freelance writer for a few publications while he developed his political chops and became a standard bearer for the Liberty Union party.

When you approach 295 Maple Street, it looks like any other student-filled Victorian in town, complete with a banner strung across the front advertising apartments for rent. The wrap-around exterior porch is strewn with miscellaneous possessions, including an old organ and a mini grill. 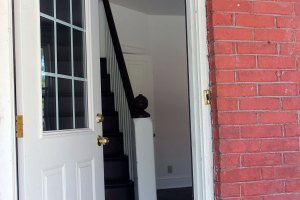 Sanders' old unit is behind the Victorian behemoth, on the right side of a converted carriage house – if you’re looking at it from the driveway. The property owners – who did not take ownership until the 1990s – thought his unit was on the left side of the building.

“I talked to the landlords and they said, ‘Well it makes sense that he lived in the left unit,’” said property manager Laura Marcou, who said they laughed about it, and added, “‘Tell him he still owes us back rent.’”

Marcou, who manages several buildings for Two Properties, a firm based on Shelburne Road, grew up in Vermont, and shrugged about the Bernie Sanders connection.

“It is what it is,” she said. Her job is to make sure it gets rented. Asked to describe what kind of person is drawn to the building now, she described a similar set to Bernie Sanders. Kind of.

“They’re working. In this particular unit it’s usually young professionals. Sometimes college students but they’re usually back for grad programs or something. In the back it’s usually pretty nice kids.”

The unit now rents for $1,300 a month, well below market rate for the area, and has one upstairs bathroom with a tub. Heat and hot water are included in the rent. (The same management firm has a luxury, furnished apartment of the same size available in a new building for $1,750.) The apartment hasn't changed substantially in 43 years; it's in mint Sanders' era condition.

Maple Street was home for Sanders for at least seven years and possibly longer, according to old news stories, Liberty Union documents, recollections from several friends, and correspondence from the Federal Elections Commission.

At some point, he left. News outlets have reported that he was evicted, but there is no civil action at the courthouse, and two sources said it was not true.

Whether or not Sanders let his rent lapse is another story. He and his neighbors faced large rent increases year after year in the late 70s, and at one point they reached out to a North End advocacy group to demonstrate against the landlord.

They picketed, a worker for the group who did not wish to be named, said, and the issue was resolved amicably in 1979. The landlord is now deceased.

Sanders lived sparsely in the unit, with the tow-haired Levi in a small back bedroom upstairs. The place was scantily appointed, a friend recalled, and “filled with not much furniture and not much food in the fridge but stacks of checked-out library books and scribbled-on legal pads,” as Politico reported.

“Stark and dark,” is how Liberty Union member Darcy Troville described it. Sanders struggled to pay bills, often kept the electricity off, and ran an extension cord to the basement at times. Another friend remembered a big blacklight. 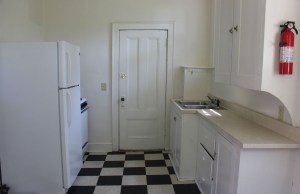 Sanders supported himself by writing for alternative publications, including the Vermont Freeman, Vermont Vanguard, and Vermont Life magazine, and he was reportedly a carpenter.

Gene Bergman, a friend, recalled that Sanders' lifestyle was "sparse."

“It was just him and Levi," Bergman said.

Sanders “scraped together the money" to take care of his young son as he began campaigning in the early 1970s, according to Martha Abbott, a fellow Liberty Union colleague.

Longtime friend and UVM professor Richard Sugarman said Sanders' experience as a struggling single parent in Burlington may have helped him solidify his platform and decision to run for mayor. “Rents were being raised in Burlington by the week and by the month, and nobody could afford to live there,” said Sugarman. “One thing I could tell you we talked about this, his view and my view is that – when he was thinking about running for the first time for mayor – was that if you worked in a city you ought to be able to afford to live there."

In an article in Chittenden Magazine in December 1972, Sanders wrote about his favorite audience.

“Of all the groups that a candidate talks before, I prefer to talk to low income people,” he wrote. “They ‘know’ a lot more because their lives are on the line and they can’t escape behind $10,000 a year incomes. As can the good liberals.”

Sanders tried to initaite a rent stabilization program in Burlington immediately after becoming mayor in 1981. Two months into his term, city voters rejected the proposal. Landlords were better organized than the mayor’s office, and people were afraid of what a new law under an unknown mayor might bring.

Thirty four years later, there is no rent stabilization program in Burlington, no limit on rent increases, and no advisory committee that tracks city rents. Chittenden County is listed year after year as one of the nation's most expensive counties.
Twenty five percent of the city’s housing stock is for seniors and low-income populations, according to Michael Monte, chief financial and operating officer of Champlain Housing Trust, an affordable housing nonprofit. The remaining 75 percent of rentals continue to rise in price, year after year, Monte said.

“They struggle. And they struggle desperately," Monte said. "For somebody who’s a single parent, they would have to be a professional making $40,000 to $50,000 to find themselves with some level of affordability."

Rent for a one-bedroom or two-bedroom could be as high as $1,800. The asking rent of $1,300 at Maple Street is not common and most likely to only be found through “mom and pop” landlords, he said.

Thirty five years after Sanders campaigned in Burlington, his dream of affordable housing never came true. It probably never had a shot. Even he moved out of downtown.

Correction: In an earlier version of this story Michael Monte was attributed with the wrong job title, calling him the executive director of the Champlain Housing Trust. This has been amended.

Thanks for reporting an error with the story, "For $1300 a month you can live like Bernie did"