[V]ermont education officials are applauding an attempt by Sen. Bob Casey, D-Pa., to end a loophole that allows U.S. companies to avoid tax liabilities if they are 20 percent foreign-owned. Tax revenues from closing the loophole would be invested in the nation’s pre-kindergarten system. 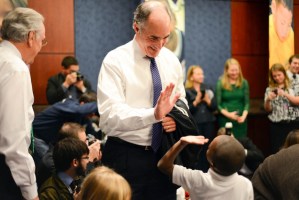 Casey introduced the amendment last week in Washington to make that change and create the funding stream for pre-K, as part of the rewriting of the No Child Left Behind Act.

The amendment is under consideration as part of a debate in Washington underway this week on the federal education act.

The loophole Casey seeks to close now “allows U.S. companies to claim they are headquartered overseas and avoid U.S. taxes,” according to a news release issued by his office.

Casey’s amendment “would change the 80/20 ownership rule to a 50/50 rule,” for businesses in the United States that operate in another country. “In other words, companies would need to be at least 50 percent foreign-owned [as opposed to just 20 percent] to escape U.S. tax jurisdiction,” the senator said in a release.

“In effect, this would mean that a company looking to invert by merging with a foreign company would have to merge with one at least as large as itself,” according to the news release. “This significantly decreases the incentive to engage in an inversion.”

“Investing in pre-K is good for our nation’s economy,” Casey said. “This amendment is an opportunity to invest in our children and the long-term foundation of our economy while ending an egregious tax loophole that both parties agree needs to go.”

Casey’s amendment would create $30 billion in grants over a five-year period. States would match the federal funding for full-day preschool for 4-year-olds from families earning below 200 percent of the federal poverty level.

If the amendment was approved, Vermont would receive about $130 million, which would serve about 15,000 Vermont children, according to the Congressional Research Service.

“Early childhood education is an opportunity generator at all levels -- for children and their families, for their communities, and for our larger society. It is a tool that truly can help break the cycle of poverty and sow the seeds for future educational success and for successful lives,” Leahy said in a statement. “Few states have recognized its importance more than Vermont has.”

“Federal recognition of the importance of preschool education in order to address the achievement gap for students from low-income homes is significant, and I hope the money is forthcoming to support our pre-K efforts,” said Rep. David Sharpe, D-Bristol, chair of the House Education Committee.

Vermont last year passed a universal pre-K requirement, Act 166, but postponed the mandatory implementation from this year to next year to allow more time; still, about a third of school districts are moving forward with universal pre-K this coming school year.

“Vermont is one of those states that has made progress on early learning, but we need support at the federal level,” said Julie Coffey, executive director of BBF.

Thanks for reporting an error with the story, "Ending loophole in corporate ownership rule could fund federal pre-K"