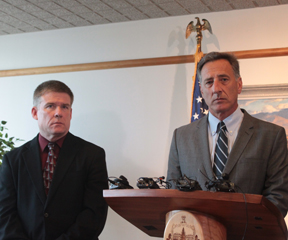 Public Safety Commissioner Keith Flynn said he proposed the plan when he was instructed to find approximately $1.7 million savings in his department for Gov. Peter Shumlin’s draft fiscal year 2016 budget.

The PSAP cut is just a portion of the $10.8 million in labor cost reductions in Shumlin’s January proposal to close a gap between revenue and spending. The deficit lawmakers are currently working to close stands at $112 million, according to the governor’s spokesperson, Scott Coriell.

Flynn said the consolidation — Derby into Williston, and Rutland Town into Rockingham — is an attempt to save money by creating an economy of scale, which eliminates some fixed costs associated with operating two call centers around the clock.

The four call centers have 104 employees — 71 full-time and 33 temporary. The proposal would reduce positions by 14, Flynn said, because some positions would move to the new locations. Forty-two of the 104 are in Derby or Rutland Town.

Flynn said his department has consolidated before. More than a decade ago, the department consolidated dispatch centers, which do not answer 911 calls, from 12 to 4. (There are also 4 private PSAPs in Hartford, Lamoille, St. Albans and Shelburne that take 25 percent of 911 calls.)

Rep. Butch Shaw, R-Florence, who chairs the delegation in the Rutland district, said his group is challenging whether $1.7 million in savings can actually be realized through closing the centers. A volunteer firefighter in Pittsford, Shaw also said local departments are convinced the proposal jeopardizes public safety. 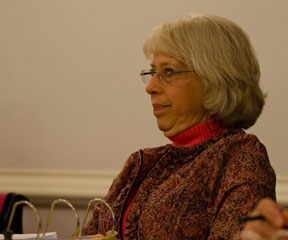 Sen. Peg Flory, R-Rutland, shared a spreadsheet with VTDigger that shows that the state spent nearly $10,000 in 2014 on overtime for temporary workers in Rutland Town and Derby and almost $250,000 on overtime for full-time employees. The high levels of overtime indicate there aren’t enough workers to cover the available shifts.

“I don’t think it was very well thought out,” Mullin said of the proposal. Mullin added that, from a management perspective, the solution to covering open shifts in a schedule is to hire temporary workers, and not to pay time-and-a-half unless there is an urgent situation.

Flynn said in an interview that paying overtime is cheaper than hiring a new employee, and that finding an overtime solution is complicated because of the union contract with the Vermont State Employees Association.

According to Flory’s documents, temporary workers make $17 per hour, and full-time workers start around $34,000 per year before benefits. Experienced workers who showed up at a VSEA rally at the Statehouse last week said they make upward of $20 per hour.

Newport Mayor Paul Monette said the city council passed a resolution last week in an effort to defend those high-paying jobs and as a way to maintain public safety in the region.

“One of our big concerns up here in the (Northeast) Kingdom is losing good-paying jobs,” Monette said. “We also know that 911 can have issues.”

Derby PSAP employee Tom Lague said Orleans County has such chronic unemployment that the call center can easily find employees to hire, who then stay in their jobs for a long time. Lague said that’s the opposite of the situation at the Williston PSAP and in Chittenden County in general.

“In the Derby area, it’s a depressed area,” Lague said. “We have the highest unemployment in the state in Orleans County. Eighteen months ago, they were basically saying there weren’t enough of us, and now they’re saying they can reduce the number of personnel by what amounts to one-third.”

Vermont State Police Capt. Donald Patch, who has been project manager for the PSAP consolidation since December, testified to the Legislature in a 2013 fee structure report that “With our current level of dispatching and 911 call-taking duties, I don’t believe we can handle a significant increase in dispatching duties with our current staff, equipment and infrastructure.”

But Patch said in an interview Wednesday that opponents of the proposal have taken his comments out of the context of a report to set baseline rates for local agencies already using dispatching services.

“We couldn’t take on a bunch of new agencies based on that fee structure,” Patch said. The structure proposed charging police, fire and emergency rescue agencies between $1,000 and $20,000 per year based on factors such as call volume and officer numbers.

The existing funding model for government PSAPs comes in piecemeal, according to the report, because of a distinction between “call taker” and “dispatcher” duties that are often performed by the same worker.

Emergency calls are answered by “call takers” and funded through a universal service E-911 fee that the Public Service Board allocates. Dispatchers answer 7-digit, non-emergency phone numbers and forward the calls to appropriate personnel or agencies.

The Public Safety Department gets limited dispatcher funding each year from the Fish and Wildlife Department, plus $62,390 from agency fees, according to Patch’s report. The public PSAPs receive $810,000 per year in telecommunications fees from the Public Service Board for call taking; private ones receive $360,000.

Only eight agencies in the state – including virtually none in Rutland or Orleans counties – pay fees for the dispatching services, according to Patch’s report. But nearly everyone pays into the E-911 fees on their cellphone and landline bills.

Shaw said he proposed an amendment to have agencies pay fees going forward to maintain the call centers, but withdrew it out of concern for the amendment’s relevance. Shaw is now hoping his allies in the Senate will introduce similar legislation.

Mullin said imposing fees is a good alternative to closing the call centers because “We do not have a foolproof 911 system.”

For example, the Cavalry preschool in Pittsford is in a separate location from Lothrop Elementary School building on U.S. Route 7, but the same name shows up on the operating system when you call 911 from a landline, Mullin said.

Rep. Peter Fagan, R-Rutland, said in a Monday hearing in the Committee on Appropriations that the 911 system is less efficient because when people call from cell phones, PSAP operating systems can’t trace the location.

Sam Trombino, 51, who works at the Williston PSAP, said people’s tendency to describe their location by landmarks that aren’t there anymore – like “The Old Jones Farm” instead of “The Smith Farm” means local knowledge and experience make the workers more effective than some technology upgrades.

“When someone’s in crisis, you don’t have time to play on Google Maps to figure out where they are,” Trombino said. “We just can’t do it. We’re already maxed.”

Flynn said dispatchers’ local knowledge is important, but that it’s not uncommon for a 911 call headed to Derby to show up in Williston and be answered there, even without the consolidation.

“Ten years ago, I think those would have been very valid arguments that would carry a lot more weight than they do now,” Flynn said of the dispatcher’s technology arguments.

Flynn said his department now uses stronger antennas on mountaintops, has better 911 labeling on homes and technology that automatically recognizes a trooper’s voice and brings up the person’s location on the screen.

Coriell, the governor’s spokesperson, said the administration is open to other ideas if lawmakers do not like the consolidation proposal.

“We don’t have all the answers to the budget gap,” Coriell said.

CORRECTION: A previous version of this article incorrectly said that 15 years ago, the Department of Public Safety consolidated government-funded PSAPs from 12 to 4. The department consolidated dispatch centers, which do not answer 911 calls, from 12 to 4.

Thanks for reporting an error with the story, "Call center consolidation plan faces wide opposition"