The state provides up to 28 days of temporary housing to individuals and families who are homeless if someone is age 65 or older; if they receive Social Security or disability; if they are under age 6; or if they are in the third trimester of pregnancy. There are also ways for specific vulnerable populations, such as disabled veterans or Reach Up recipients, to qualify. 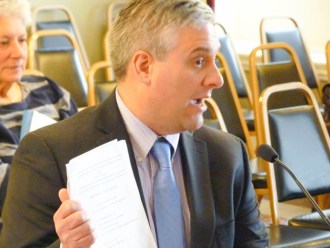 Sean Brown, deputy commissioner in charge of the Department for Children and Families Economic Services Division. Photo by Morgan True/VTDigger

In addition, there is a cold weather exemption that relaxes the eligibility requirements when temperatures drop below 20 degrees, or 32 degrees with snow or freezing rain.

Since July, more than half of temporary housing granted was through the cold weather exemption, despite the fact that no days in October met the criteria. The state has spent more than $855,000 through the exemption this winter.

“That’s getting close to what we spent all of last season, and we still have February, March and some of April to get through,” said Sean Brown, deputy commissioner in charge of the Department for Children and Families Economic Services Division. January was particularly bad, with every night meeting the cold weather requirement in all 14 counties, Brown said.

A lack of space in shelters has increased the number of people the state is putting up in hotels and motels, he said. Requests for housing were up 64 percent through December, and the state provided 50 percent more hotel rooms per night.

The increasing need among families seeking shelter has resulted in a 144 percent rise in the number of children who received housing through the cold weather exemption, which Brown called an “alarming” statistic.

Often space for families in shelters is limited, and many wind up in rooms rented by the state. At the same time, the average cost of hotel and motel lodging for those who can’t find space in shelters has increased from $61 to $70 this fiscal year over last.

The problem is especially bad right now in Barre where space for families in shelters is scarce, and the cost for hotels in the temporary housing program is the highest in the state at $80 per night, Brown said.

Following a VTDigger investigation this summer that showed the poor living conditions in some of Barre’s participating hotels, the state has had to seek different partners for the program.

“I think you’re seeing some of this price reflect some of that publicity that happened. We had to shift to use other hotels and when they realized that was happening they started increasing their rates,” Brown said. 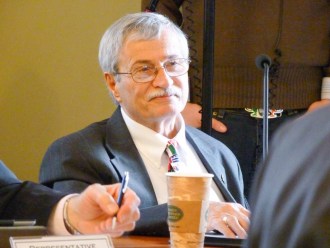 Rep. Tommy Walz, D-Barre, asked Brown to provide him with a list of participating motels in the area. After Brown’s testimony Walz said he wants to work with those in his district to bring costs down.

“If they’re charging something above the regular market rate for this population that’s a concern,” he said.

Families with children need larger permanent housing options, typically a two- or three-bedroom apartment, and finding any kind of housing is difficult, Brown said. Across the state, there is a roughly 1 percent vacancy rate, driving up the cost of any available housing, he said.

DCF has partnered with the Champlain Valley Office of Economic Opportunity to open a 20-bed warming shelter in the old Ethan Allen Club in Burlington, which is expected to open Monday. Brown said he’s hopeful that will reduce costs in the highest need area of the state.

The approved budget for the General Housing Assistance Program is $2.6 million in the current budget, and the state is seeking $600,000 more through the budget adjustment process. That would put the program on par with the $3.2 million spent the previous year, but if the current trend of higher need continues it could exceed that amount, Brown said.

Gov. Peter Shumlin’s proposed fiscal year 2016 budget includes a $300,000 reduction. Brown said the cut is reasonable because demand is expected to decrease with the opening of a new 52-bed warming shelter in downtown Burlington, slated to begin operations before next winter.

The state is partnering with Champlain Housing Trust and Safe Harbor Health Clinic to provide health services, including mental health and substance abuse services, on site at the shelter, which will be located at 179 North Winooski Avenue, Brown said.

That increased capacity should reduce reliance on hotel rooms, provide better supportive services to aid people’s transition to permanent housing, and ultimately offset the $300,000 reduction to the program.

But the increased need for temporary emergency housing points to a more troubling trend, said Erhard Mahnke of the Vermont Affordable Housing Coalition. The lack of available housing, and the lack of affordability, is fueling the state’s homelessness crisis, he said, particularly for families.

While most of Vermont recovers from the financial crisis of the last half decade, Vermont’s poor are in a “permanent Great Recession,” he said.

“There is virtually no place in Vermont, especially not in Chittenden County, where families who are on fixed incomes or working at service sector jobs can find an apartment, and that’s driving our homelessness,” Mahnke added.

Statewide the average wage necessary to afford a two-bedroom apartment is $20 per hour full-time. In Chittenden County the housing wage is closer to $25, he said. That’s especially difficult for single parents, who would need multiple, full-time low-wage jobs to stay in an apartment.

“When you look at those kinds of numbers it doesn’t take a rocket scientist to figure out what’s fueling our homelessness crisis,” he said.

Sequestration — mandatory across-the-board cuts to the federal budget — has reduced the money available to support the construction of affordable housing over the past five years, he said.

But Mahnke praised Shumlin and the the Legislature for making smart investments in affordable housing initiatives. Last year Vermont made increased funding for programs such as the Community Housing Grants, Family Supportive Housing Program, Vermont Rental Subsidy Program and the Vermont Housing Conservation Board.

“These are the kinds of investments that the state needs to continue to increase in order to wean itself off the need for emergency housing budgets,” he said.

The governor’s proposed budget doesn’t cut any of those programs, according to Mahnke, but it also doesn’t increase their funding.

“This year we’re really holding on to what we’ve got,” he said.

Thanks for reporting an error with the story, "Cold winter stretches state’s emergency housing budget"