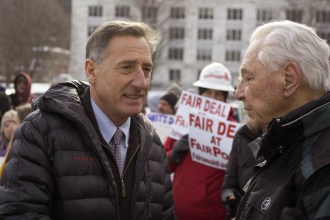 Gov. Peter Shumlin talks with Edwin Hill, president of the the International Brotherhood of Electrical Workers, at a Thursday rally by striking FairPoint Communications workers at the Statehouse. Photo by John Herrick/VTDigger

Workers on strike against FairPoint Communications rallied on the Statehouse steps Thursday, and were told to “stay strong” by the head of a national union.

“I know it’s difficult. I know it’s tough to be on strike,” Edwin Hill, president of the International Brotherhood of Electrical Workers, told more than 100 employees bracing themselves against the cold. “Don’t crumble, please. Everybody in the country is watching, you know. Everybody.”

Friday will mark the fifth week since FairPoint workers left their jobs to oppose new terms of employment imposed by FairPoint after contract negotiations deadlocked this summer.

Several workers, many wearing red to identify with the union, said Thursday they will return to work only if a new contract is signed.

The protesters rallied in Montpelier and Boston on Thursday. They plan to rally at FairPoint offices in Manchester, New Hampshire, on Friday.

FairPoint’s initial proposal in April would have cost union workers more than $700 million, which includes cuts to benefits and pay, according to the IBEW and CWA. The unions say they have offered $200 million in cost-saving compromises, but the company rejected the offer.

The parties last met with a mediator Tuesday and neither side offered concessions. No further meetings are scheduled.

Mike Spillane, business manager for IBEW Local 2326, said the unions are not asking for anything extra from the company. 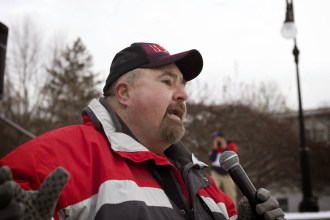 Mike Spillane, business manager for IBEW Local 2326, spoke to a crowd of FairPoint picketers in Montpelier on Thursday. Photo by John Herrick/VTDigger

“We’re asking for what we’ve earned, what we deserve,” he said. “We’re not out here trying to demand more money out of them.”

FairPoint says it needs the concessions to remain competitive.

"FairPoint’s priority is to move its old monopoly-era contracts with the Unions into the mainstream while preserving generous base wage rates for current employees that are, on average, significantly above the median income level of northern New England," the company said in a statement Thursday.

Heather Hathaway of Walpole, New Hampshire, said she has worked at FairPoint or its predecessors for 20 years out of Brattleboro. She said the terms the company was imposing were “absolutely ridiculous.” However, she came to the rally because she is concerned for her job security.

“To cut our benefits is one thing, but cutting jobs is a huge thing,” she said. “I would like a place to call work — where I can go back to.”

She said she is also a FairPoint customer. She called the company to fix a problem with her service, but the company has not yet followed up with her in person. The company has hired contracted workers to fill in for the strikers.

“I’ve been without dial tone since two days before the strike. I’ve called and I still haven't gotten someone to come to my front door,” she said.

Gov. Peter Shumlin came to the rally to greet the protesters. He said the holiday season is a tough time to be out of work. He said he had called FairPoint’s CEO Paul Sunu to urge the company to negotiation with the unions.

Shelley Martin, president of the Vermont State Employees Association, which does not represent the workers, presented the protesters with a $5,000 check and vowed to form a committee to help the strikers raised money. Stephen Finner, of United Academics, said the union will donate $1,000 to the strikers.

The unions represent about 1,700 of FairPoint’s approximately 2,550 employees in Vermont, New Hampshire and Maine.

"We want to reach agreements with the Unions," the company statement said. "To move this negotiation forward, we have asked that the Unions provide counterproposals that meaningfully and substantially address the core issues in this negotiation.  To date they have failed to do so.  The ball is in their court."

Thanks for reporting an error with the story, "At Statehouse rally, FairPoint strikers told to ‘stay strong’"