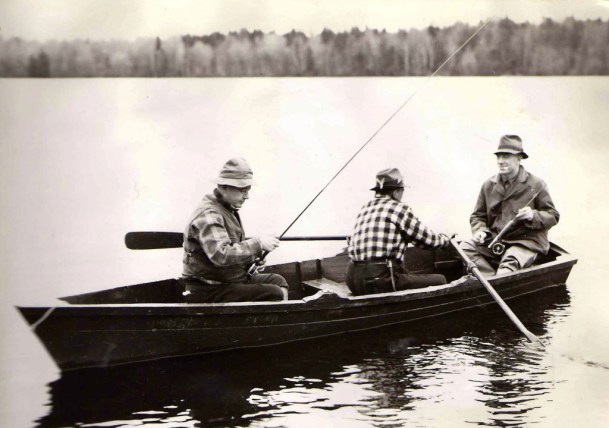 Editor's note: This article is by Tim Trever, a freelance writer from Taftsville. In This State is a syndicated weekly column about Vermont’s innovators, people, ideas and places.

Quimby Country, the oldest operating sportsman’s camp in Vermont, is getting ready to close the doors on its 118th season. At Quimby’s in Averill, the heavily wooded northeast corner of Vermont, the red bellies of spawning brook trout match the hatch of leaf cover overhead and the first hard frost has come and gone. 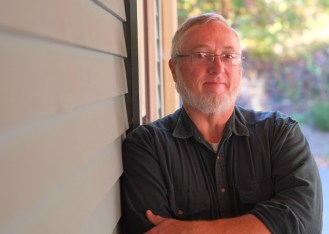 “It’s mostly bird hunters in the fall,” says Quimby’s manager Ray Daigle. “These days fishermen come mainly in the spring. The fishing can be quite good, but fishing is a much smaller part of Quimby’s business compared to the past.”

The spring fishing season gives way to a “social season” at Quimby Country, when families who have been coming for generations find each other again and fill up the 20 cottages. Each cottage is named after a trout fly (Ray’s favorite is the gaudy Jock Scott designed by a Tweed River salmon gillie 150 years ago). Vacationers go fishing on Forest Lake, dine in the rustic lodge, hike, and swim in crystal-clear Big Averill Lake. Yet trout fishing is still at the heart of the Quimby story, a story carefully preserved in the Quimby photo albums. 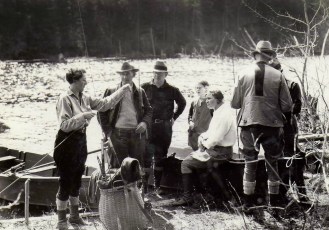 Mrs. Edson, believed to have been a fishing guide, shows guests how to string up a fly rod in this undated photo. Photo courtesy of Quimby Country archive 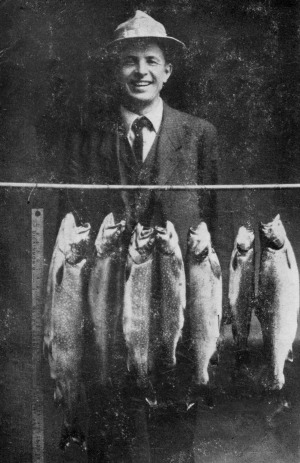 A man shows off his catch of trout and salmon in this photo from Cold Springs Camps circa the 1920s. Photo courtesy of Quimby Country archive.

The earliest photo albums date to 1896. Grainy, black and white photos show mostly men and their fish. Sometimes the catches are displayed on long stringers, other times the fish are laid out beside the lake. One caption reads “a typical day’s catch.” There are some 135 fish in the photo, among them brook trout, lake trout and landlocked salmon. Lake trout were advertised to run up to 20 pounds, and a four-pound brook trout was common. Photos like these have modern anglers wishing they could go back to the 19th century. But those catches couldn’t be sustained. Troll through the photo albums, and note that the fish catches decline and the fish get smaller.

The early albums include the rare aureolus, or golden trout “up to 28 inches.” Aureolus was the name originally given to the Lake Sunapee Trout. These were a remnant population of arctic char, surviving in only a few deep, cold New England lakes after the retreat of the Wisconsin ice sheets 12,000 years ago. The Rangeley Lakes in Maine had them and, at over 100 feet deep, so, quite possibly, did the Averill Lakes. According to Vermont Fish & Wildlife fisheries biologist Lenny Gerardi, a preserved 100-year-old fish from Big Averill, thought to be an arctic char, resides at the Smithsonian Institution. As for a native population of lake trout in the Averill Lakes prior to lake trout stocking, Gerardi says it’s a toss-up. The evidence is not clear if these fish were arctic char, lake trout or both."

In some ways these early photo albums represent the vanishing abundance of America’s native fish. By 1896 much of the destruction of native trout and salmon habitat in eastern North America had already occurred. The industrial revolution was well under way. The great northern forest was a final refuge, but even it had seen dramatic declines in native fish. The 1850s saw heavy logging, as well as road, rail and dam construction in the region, which devastated trout habitat. By some estimates, 90 percent of the original habitat of brook trout has been destroyed throughout its native range.

By 1900 sportsmen from cities across America were looking for a taste of the century before, and Quimby’s beckoned. Maine Central Railroad delivered Quimby’s sportsmen to Stewartstown, N.H., and then, for $1.50, a horse-drawn coach got them as far as Big Averill Lake. They’d cross in a wood-powered steamboat to arrive at Forest Lake. Over time, the photos of men give way to the occasional photo of smiling women anglers -- some smoking pipes -- and eventually whole families. 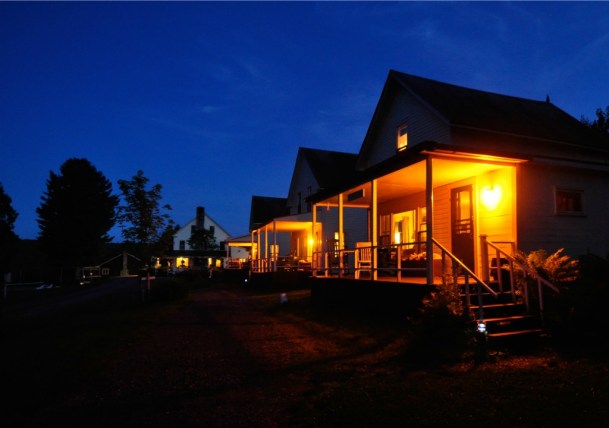 Cabins at Quimby Country glow at night. The main lodge is visible In the background. Photo by Mark Bushnell

From the start, Quimby’s relied on fish stocking to supplement native populations. Gerardi explains that stocking of lake trout from Midwestern states started at the Averill Lakes around 1890. Salmon stocking began around the same time.

One early brochure describes how, “At the close of each season about 5,000 brook trout, 3-5 inches, are added to Leach Pond (Forest Lake), and about 100,000 fry are added to Averill Lake.” It continues: “These fish are a large variety of brook trout of deep salmon color … a richer flavored fish never graced a frying pan.”

Nationally, fish breeding, culture and introductions of non-native fishes was widespread during the early decades of the 20th century. Native fish often fared poorly against the new arrivals. Pike and pickerel were plopped into trout ponds by fishermen who favored them. Brook trout disappeared. Large- and smallmouth bass, native to Lake Champlain, were rapidly introduced across the state in the early 1900s. According to Robert Behnke, who spent a celebrated career sorting native trout types across America, it was lake trout introductions at Big and Little Averill that did in the arctic char.

In 1919, an elegant woodswoman, Hortense Quimby, the daughter of founder Charles, took over operations. She grows up in the photo albums, posing with a paddle in the stern of a canoe or standing on the porch with her father and the guides. It’s Hortense who launched the change in culture at Quimby’s culminating in what we see today. She pressed the Vermont Legislature for improved fisheries science, pushed for more stocking and tighter regulations. She also shifted the camp’s focus toward fly fishermen who, she wrote, were satisfied with lower bag limits. 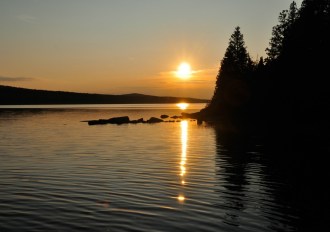 The sun set over Big Averill Lake in the town of Averill, in the Northeast Kingdom. Photo by Mark Bushnell

There was pushback from her guides -- none of whom were fly fishermen -- but among America’s new urban elites, fly fishing was all the rage. Hortense also worked to attract the “vacationist,” because more fishermen, she said, “would be too heavy a tax on the lakes.” She added a tennis court, put bathrooms in cottages, and ramped up the dining room. “The sustained excellence of the table, “ she wrote, “is sanctioned by the ladies.”

What about trout fishing in Quimby Country today? It’s still a fishy place. Forest Lake has bass and is stocked with catchable rainbow and brown trout, so anyone can catch fish. You can fish for small lake trout in the Averill Lakes, but salmon stocking ended there in 2000. There is excellent fishing for wild brook trout in many tributaries of the nearby Nulhegan River. 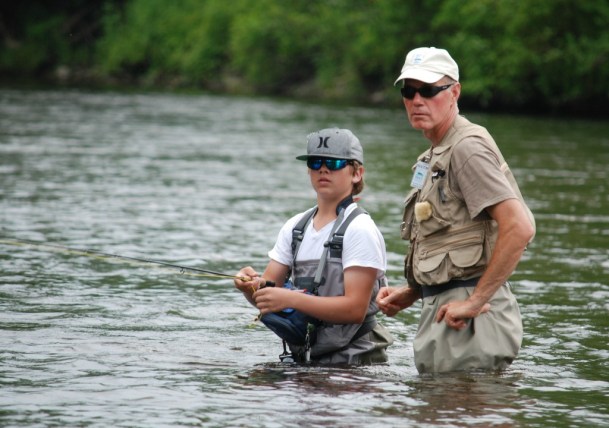 Don Coffey, a staff member for Vermont Trout Unlimited, works last year with a boy during the trout camp for teens that is held every year in June at Quimby Country. Photo courtesy of The Mad Dog Chapter of Trout Unlimited.

The biggest fish story in the area is now restoration. The state of Vermont and Trout Unlimited are working to improve trout habitat injured by logging years ago. Quimby’s is an active partner in education, hosting trout camp for teens every June.

Joe Norton, project manager of the Upper Connecticut Home Rivers Initiative, recently mentioned the efforts to reconnect fragmented habitats so that highly mobile brook trout can migrate. His team is replacing hanging culverts that strand trout upstream and is felling trees into stream channels to provide insect food and trout cover and redirect water flows. A study by state biologist Jud Kratzer will chart the changes in fish populations for years to come.

Undoubtedly, Quimby’s photo albums will do the same.

Tim Trever, a freelance writer from Taftsville, is substituting this week for Candace Page who is on vacation.

Thanks for reporting an error with the story, "In This State: Quimby Country reflects a century of changes in fishin..."