Following the sudden closure of the Vermont Center for the Deaf and Hard of Hearing (VCDHH), the state Agency of Education has hired Nine East Network to provide services for the hearing impaired.

Nine East Network will take over $862,000 in federal grant money doled out by the Agency of Education to provide school-based services for students as well as parent and infant services formerly administered by VCDHH. 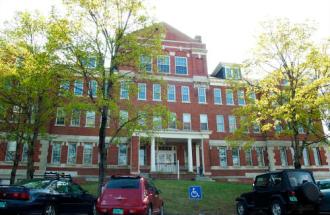 Austine School and the Vermont Center for the Deaf and Hard of Hearing. Photo by Zachary P. Stephens/Brattleboro Reformer

In June the VCDHH board of trustees closed the Austine School in Brattleboro, which had served a declining number of deaf and hearing impaired students. The board voted on Sept. 3 to dissolve the organization entirely.

Some members of the deaf community are concerned that without a school dedicated to serving them, some hearing impaired students may fall through the cracks.

“Deaf and hard of hearing children in Vermont are now scattered all over the state. They are isolated in their public schools, and often are the only students who use sign language or have no access to sign language at all,” said the Vermont Association for the Deaf in a statement, “Learning is severely limited when a student needs to watch an interpreter every day, and has no one to sign to or talk with.”

James Tucker, an Austine School alum and superintendent of the Maryland School for the Deaf, said the group plans to ask Gov. Peter Shumlin and the Legislature to step in and save the school, the Brattleboro Reformer reported.

“We will also ask the state to absorb VCDHH's debts, and then turn Austine School into an independent state agency with oversight from the Governor's Office and the Vermont General Assembly,” Tucker told the Reformer.

Vermont currently has no plans to open a separate facility following Austine’s closure, said Jill Remick, a spokeswoman for the Agency of Education.

Not all members of the deaf community want a new school to be opened, Remick said in an email.

“In some cases the opposite is true – having your child sent away to a separate school hours from home may not be the best solution either,” she wrote.

The Austine School is located on a 150-acre campus, and was only serving 22 boarding students at the time of its closure, said Bill Gurney, president of VCDHH. In the 1970s the school had close to 140 students, Gurney said.

“It was a gradual but pretty sharp decline in students living on campus,” he said.

VCDHH paid for the Austine school’s operations through student tuition, typically from school districts across the state that sent students there, he said.

Schools for the deaf and hard of hearing that are still viable elsewhere in the country are all state funded, according to both Tucker and Gurney.

About 40 VCDHH jobs will be eliminated in addition to the 50 staff positions that ended when the Austine School closed in June, Vermont Public Radio has reported.

Gurney and a skeleton staff are closing down operations and doing inventory work to aid a new trustee that will be appointed by the state. The trustee will pay off creditors, liquidate assets, and oversee the facility until it finds another use.

Gurney was not immediately able to provide the amount of debt that VCDHH is carrying. In its last full year of operations, the organization had a total budget of close to $7.5 million, he said.

The VCDHH’s audiology department for children and adults will incorporate on its own, Gurney said, and will become Brattleboro Hearing Services. The company is looking for a location in Brattleboro, he said.

Nine East Network signed the contract with the state on Sept. 19 to provide services to roughly 600 students formerly served by VCHDD, and will begin its work on Oct. 20.

“It is critical that we ensure a smooth transition for these children and families,” said Cindy Moran, Vermont’s director of special education, “Susan Kimmerly of Nine East Network has stepped up to the plate at a critical time for these students, in order to ensure little interruption of expected and required educationally related consultation services.”

Kimmerly started Nine East Network in 2003 to provide speech and language serves and “fill gaps in Vermont’s service needs to children and families,” according to its website.

Thanks for reporting an error with the story, "State hires new company to provide services for deaf students"