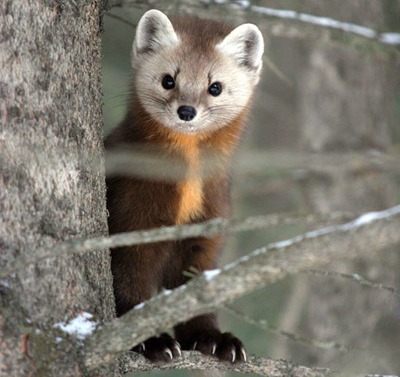 Editor's note: In This State is a syndicated weekly column about Vermont’s innovators, people, ideas and places.

Red Sox slugger “Big Papi” (aka David Ortiz) may have his selfie with President Obama, but Chris Bernier has got photos he thinks are even better – and he’s not even in them. 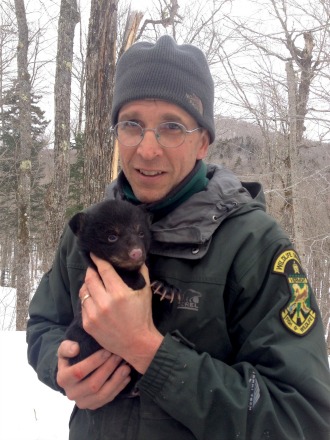 Chris Bernier holds a weeks-old bear cub to keep it warm while the radio collar on the cub's mother is being changed. Bernier, who oversees management of 17 fur-bearing Vermont animals for the Fish & Wildlife Department, recently announced that the long-vanished American marten appears to be back and reproducing in Vermont. Photo courtesy Chris Bernier

They’re pictures of martens, weasel-like animals long considered extirpated from the deep forests of Vermont. A member of the mustelid family, which includes weasels, fisher, ermine and mink, the last confirmed sightings of a wild American marten (formerly pine marten) had been in the 1940s.

Despite an effort to reintroduce them between 1989 and 1991, they’ve long been considered a “phantom emblem” of the boreal forest, in the poetic words of former state naturalist Charles Johnson, in his book “The Nature of Vermont.”

But the phantom, it appears, is back, and no one is happier than Bernier, who oversees the state’s population of fur-bearing mammals for the Vermont Department of Fish & Wildlife.

“It’s an exciting one to work on,” says Bernier, adding that even this day that he is talking about his job and the evidence for martens, he’s had two calls about potential sightings.

While his scientific background (a degree in wildlife management from the University of Maine), doesn’t lend itself to flat declarations, he says he is “cautiously optimistic” that the house-cat sized omnivores have returned to their rightful place in Vermont’s deep forests, with reproducing populations now in both the Northeast Kingdom and southern Green Mountains.

Bernier works in the Springfield office of the Fish & Wildlife Department and has the title of "Fur Bearer Project Leader," a post he’s spent 20 years working up to. His job is varied, to say the least, in keeping with the varied nature of his furry wards, which range “from the weasel up to the mountain lion,” he explains – 17 animals in all.

He’s seen them all except the mountain lion, wolf and lynx, which is slightly larger than the bobcat and is rare but does exist in a small population in the Northeast Kingdom.

“Winter is my busy time of the year, field-wise,” he explains. On any given week. Bernier can be out tracking lynx or marten, assessing habitat, checking bear dens, or writing reports in his cluttered office.

You could add that he’s never met a pelt he didn’t like – pelts and knowledgeable trappers being a source of valuable information. Another part of his job makes him a wildlife version of CSI, which recently put him in the basement of a lab at the Roxbury Fish Hatchery, where he was performing necropsies on the frozen carcasses of around 130 (no-longer-fur-bearing) animals legally harvested by trappers, primarily fisher, bobcat and otter. (Martens remain a state endangered species and are not trapped).

While it sounds like a gruesome assembly line, Bernier said the occasion drew experts from adjoining states for the “incredible information” they can get about wildlife in the region, from general health, sex, age and vitality of the animals to any diseases, parasites and whether there is evidence of heavy-metal concentration in the animals.

Bernier is one of those rare individuals who even as a child knew his likely career destination. “It was really the only choice; this is what I was going to do,” he says.

He credits his natural surroundings as a key influence. He grew up in West Gardiner, Maine, living close to the Cobbosseecontee Stream, which flows into the mighty Kennebec River. He spent endless hours in woods and on water, stashing a canoe by a beaver impoundment to paddle through twilight, observing beaver, mink, otter and other mammals.

“I spent all my free time in the woods,” he says. “I’ve been dabbling at this stuff literally since high school.”

After receiving his college degree, he worked for the U.S. Fish and Wildlife Service, and then later as a private consultant, as an environmental educator and finally as a wildlife biologist for the state of Vermont. 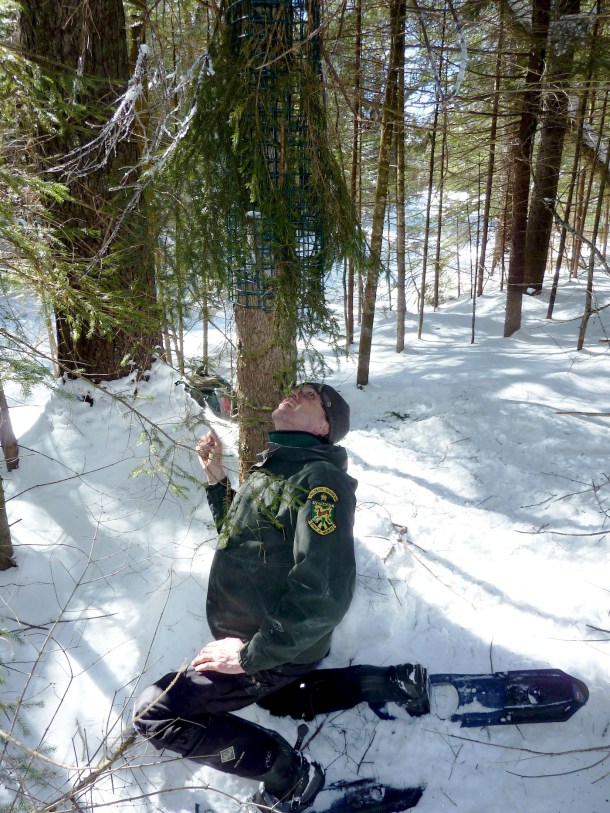 Chris Bernier is shown setting out a game camera in the Glastonbury Wilderness Area of the Green Mountain National Forest in southern Vermont. Using the cameras, he confirmed that Vermont appears to have a wild reproducing population of American martens, which were extirpated in the 1940s. Photo by Scott Wixsom, U.S. Forest Service

The tale of the marten, Bernier explains, is one intertwined with history, habitat, predators and population.

Martens are creatures of the deep forest, smaller than their cousin, the fisher. The fisher is a ferocious predator from the same family and fishers were successfully reintroduced in the late 1950s and 1960s to control porcupines.

Martens measure some 18-26 inches long (males are larger and a third of their size is tail) and the habitat of the curious but solitary predator largely vanished in the deforestation of the mid-1800s.

The regrowth of Vermont to roughly 75 percent forest opened a window for martens to find suitable upland mountain habitat, which is what they prefer, Bernier explains. More than two decades ago, the state, along with the national forest and partners in Maine and New York, released 115 ear-tagged martens in southern Vermont in places such as Mount Holly and Wallingford to try and re-establish the population in the southern Green Mountains.

For five years afterwards, a Fish & Wildlife worker set up 50 baited cameras to try to ascertain if the population was viable. “There were no pictures of martens,” said Bernier – but they got 85 pictures of fishers, which are “direct competitors for resources and a direct predator.” That led experts to consider the reintroduction a failure.

But starting in early 2000, Bernier explains, the department started receiving reports of sightings of martens in southern Vermont. “They’re very distinctive if you know what you’re looking for,” he says, and sightings were also reported in the Northeast Kingdom, where a reintroduction was not attempted because biologists figured the area would recolonize on its own.

“That is, in fact, what happened,” he says. Meanwhile down south, he guesses, a few of the reintroduced martens did survive to provide a new population.

“(Last winter) within weeks of putting out four cameras, we had pictures of two different martens.” And sightings and tracks discovered by trappers out for fisher further confirmed the state had two distinct expanding marten populations.

Unlike much larger fishers, martens thrive and live underneath deep snow cover – the term is subnivean – preying on whatever they can find there, such as moles or mice. Martens are supremely well adjusted to deep snow such as Vermont has had this year, but may be at a disadvantage in low-snow years, he says. 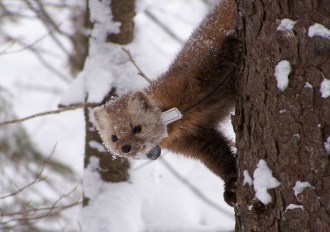 A marten with a radio collar descends a tree in this photo taken by the New York Department of Environmental Conservation. Martens are excellent climbers, like their larger relative the fisher.

Martens, even more than fishers, are remarkable and nimble climbers, a trait they share with a favorite prey, red squirrels, which they will chase across tree tops.

Bernier is now turning his attention to mapping the extent of their spread.

“We’re essentially trying to get a handle on their distribution. That’s our primary goal for now,” he says, along with studying their habitat conditions.

For Bernier, the marten success story is sort of an antidote to his most prominent media role, which is as catchall for catamount sightings and pictures. He spends a lot of time following up and mostly debunking them, finding everything from mountain lion pictures from other states to mistaken identity.

“We don’t have a reproducing population but we potentially have some passing through,” he says. “You would not believe the degree to which people are hoaxing the system.”

Andrew Nemethy is longtime journalist, writer and editor from Calais, Vermont. He can be reached at [email protected] Thanks for reporting an error with the story, "In This State: The marten makes a comeback, and Chris Bernier is hot ..."