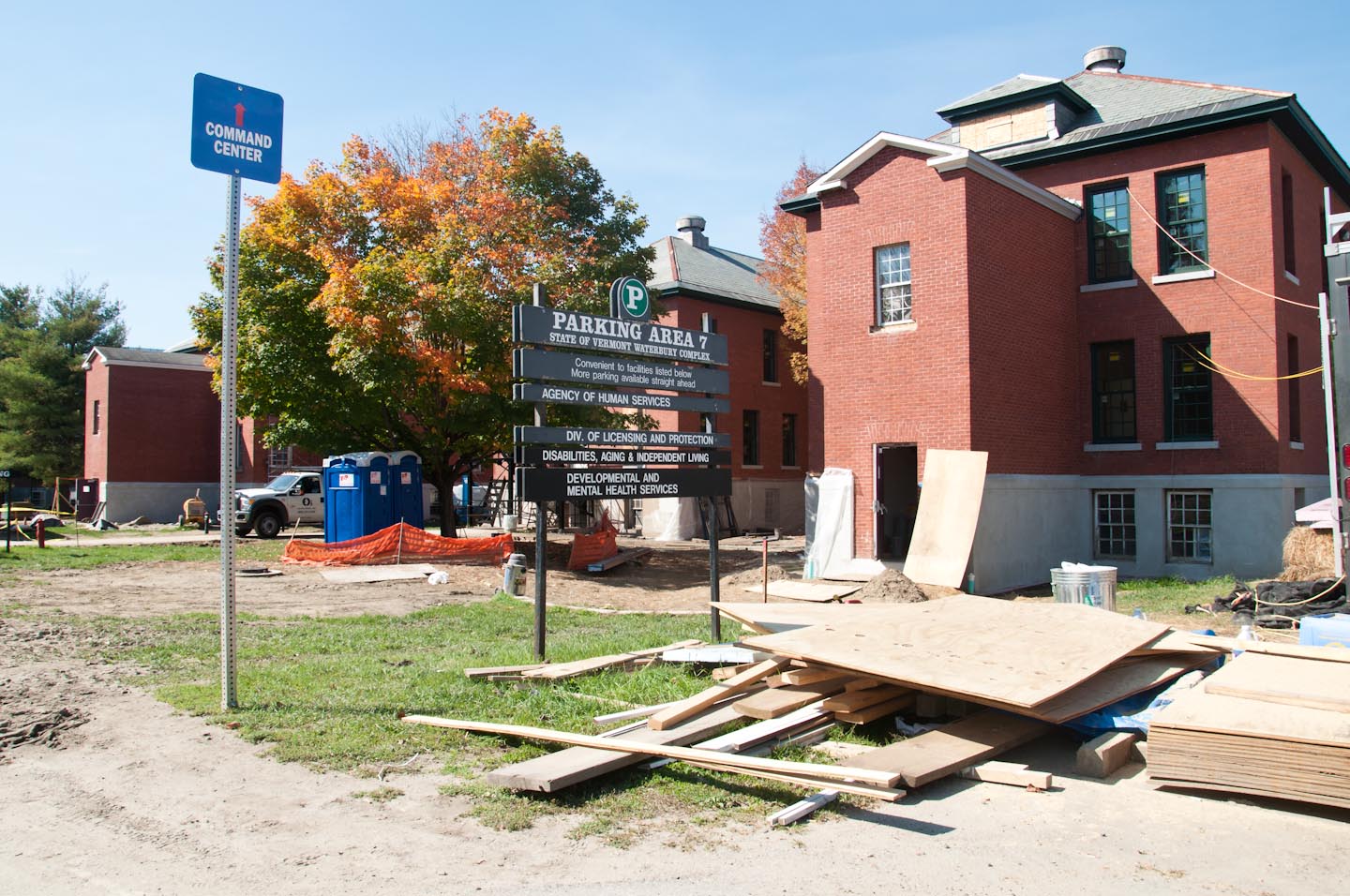 Construction materials outside an Agency of Human Services building in the State Office Complex in Waterbury after Tropical Storm Irene. Photo by Josh Larkin/VTDigger

It has been two years and four mental health commissioners since Tropical Storm Irene inundated and effectively closed the Vermont State Hospital.

As a new regionalized mental health system takes shape in its wake, psychiatric patients with severe disorders are waiting longer in emergency rooms and correctional facilities than they have since the 54-bed hospital closed in August 2011. This trend has worsened over the past two years, and physicians across Vermont agree patients waiting in these conditions receive care that is inadequate or nonexistent.

Moving ahead, funding issues might sway legislators from adding as many acute care beds as they initially planned.

According to Department of Mental Health numbers, the average wait time for acute patients waiting to be placed hit a high last month of 2.7 days. That number is up from the previous high of 2.4 days set in May, and it’s well above the average wait time of half a day in April 2012, when the state began collecting data.

One patient in July was held for 21 days before being placed in an acute care facility.

Tony Stevens is the crisis team leader at Northwestern Counseling Services in St. Albans. He reminded the Legislature’s Mental Health Oversight Committee on Wednesday that acute patients account for only a small fraction of psychiatric cases. But, he said, they are challenging cases, and the Vermont State Hospital was previously available to help treat them in times of need. Without that backstop for the mental health system, he said, the void is palpable.

“The Vermont State Hospital was always the last resort,” he said. “It was not without its faults. But it was there. It was a safety net. Now that we’re at the two-year anniversary of having lost that, it feels like a completely different system.”

Stevens said there were noticeable improvements in the way law enforcement dealt with psychiatric patients, and the state is bringing on new residential facilities for people who don’t need acute care. On the negative side, he said, wait times for patients  with severe psychiatric disorders are “exponentially” longer.

He told the legislators a story about an Addison County man who sought psychiatric help and was unable to get it. As his condition worsened, he was involuntarily admitted into the mental health system and held in an ER for five days.

“It is the patients that suffer when this happens,” he said. “It’s their friends, their families, their co-workers, the communities we all live in. It affects law enforcement, emergency rooms and staff.”

In a recent event at the temporary acute care center in Morrisville, a patient assaulted staff members, giving three of them concussions. Since the Green Mountain Psychiatric Care Center opened in January of this year, the Department of Mental Health says there have been 24 incidents of patients hurting employees. Only four times did staff require medical treatment.

The exact number of beds that the facility will provide is up in the air, and the Mental Health Oversight Committee is set to make a decision on this matter in November.

This direction was a major shift from the previous system that centered on the Waterbury psychiatric hospital, and many of the state’s leading physicians panned the proposal — including Jay Batra, who was medical director at the state hospital and later became medical director for the Department of Mental Health, before resigning in late 2012.

The landmark bill that set the groundwork for the new system was Act 79. The legislation called for a 45-bed acute-care system to replace the state’s 54-bed psychiatric hospital.

But the central piece of that new acute-care system — a 25-bed state hospital in Berlin — might very well be downsized.

“The administration is building a 16-bed facility with the capacity to add five beds,” said Sen. Sally Fox, D-Chittenden, who chairs the oversight committee. “This is all caught up in the definition of a mental institution that would qualify for Medicaid funding, which is 16. If we go to 25 beds, the likelihood is that those extra beds would be 100 percent state-funded.”

Money isn’t the only factor that will contribute to the legislators’ decision, Fox said, but it’s a big one.

“The crux of it is: What does the system need?” Fox said. “But, ultimately, there will be fiscal implications. Funding is always a factor that has to be considered in everything we do, and we have put a lot of money into building this community system.”

Shumlin said Wednesday the decision to have 16 or 25 beds will be made nearer to the opening of the Berlin facility and demand will be the determining factor.

The governor said that he is proud of the progress that the state has made and understands that problems remain.

“We just can’t forget we are still in crisis mode and have been ever since the state hospital got flooded,” he said. “The crisis has lessened somewhat by the additional beds in Morrisville, the 14 beds in Brattleboro and the 10  beds in Rutland, but we’re still short so there’s tremendous pressure on the system. There are waiting lists we wish we didn’t have. There are patients who are critically ill being held in facilities that aren’t trained for that type of acute crisis management. It’s far from an ideal situation. We’re still biting our fingernails.”

Dr. Robert Pierattini is head of psychiatry at Fletcher Allen Health Care. He has long voiced concern that Shumlin’s plan to create a regionalized psychiatric care system would diffuse expertise and provide fewer acute care beds than the state had before Irene.

“We’re turning away a record number of people who take admission,” he told the legislators. “We’re running at the maximum census we can manage.”

Thanks for reporting an error with the story, "After Irene: ER wait times for psychiatric patients longer than ever"